Ray Piscopo is renowned for his colourful paintings, some of them re-interpretations of iconic images of world art. Joseph Agius discusses with him his artistic evolution, bearing in mind the background as a professional engineer.

You are synonymous with colourful re-interpretations of world art besides other personal work that relies on your surroundings; these besides portraiture. One cannot help but notice the pop sensibility of your art. How did this style develop?

I can say that the masters had a great impact on my perception of art since a very young age. It was mainly due to an encyclopaedia I was given when I started attending the Lyceum in Ħamrun, and I was impressed by a 5cm x 8cm image of the church at Stoke Poges, a village in Buckinghamshire, UK. This became my first painting in oils on sackcloth in the early 1970s. 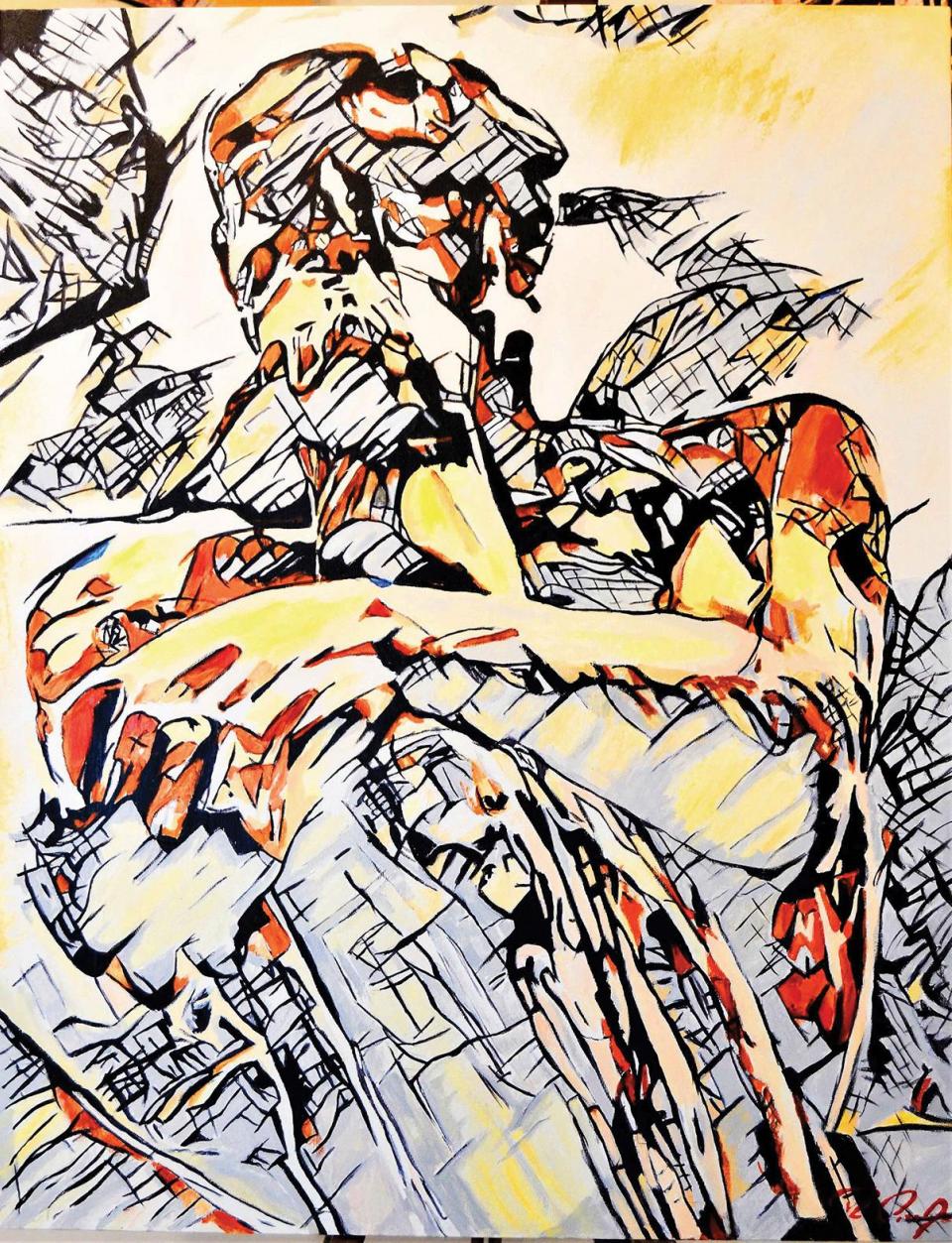 I have been drawing sketches either from life or from images since then. At that age, we had easy access to pop music (through LPs and records), comics (classics and science/fantasy), movies and advertising. My young mind was like a sponge, absorbing the colours that embellished popular and commercial culture. Serious themes notwithstanding, my first canvas paintings had the semblance of comic art – hard edges, colour infill and all.

I felt that this technique was rigid, even though the colours satisfied me. I always wanted to go the extra mile, be inquisitive and experimental, and this led to deconstructing what I saw, only then to rebuild it in a manner that was conducive to my deep feelings. My art continued to develop; 15 years ago, when I stopped my work as a professional engineer, this career decision coincided with a personal fulfilment with my art. It had arrived where I meant it to.

Everything in life has two extremes: life/death, happiness/ sadness, good/bad, rich/poor. In between, there is a mixture of both. My colour palette behaves in much the same way: I use large areas of white and black, with a plethora of colours in between to demonstrate the other nuances of life situations. But apart the apparent, there is an overwhelming mass of emotion beneath the surface layers of paint. For me, there is no art for art’s sake. Art must have moral justification; hence if viewers want to understand me, they have to search beneath the aesthetics. 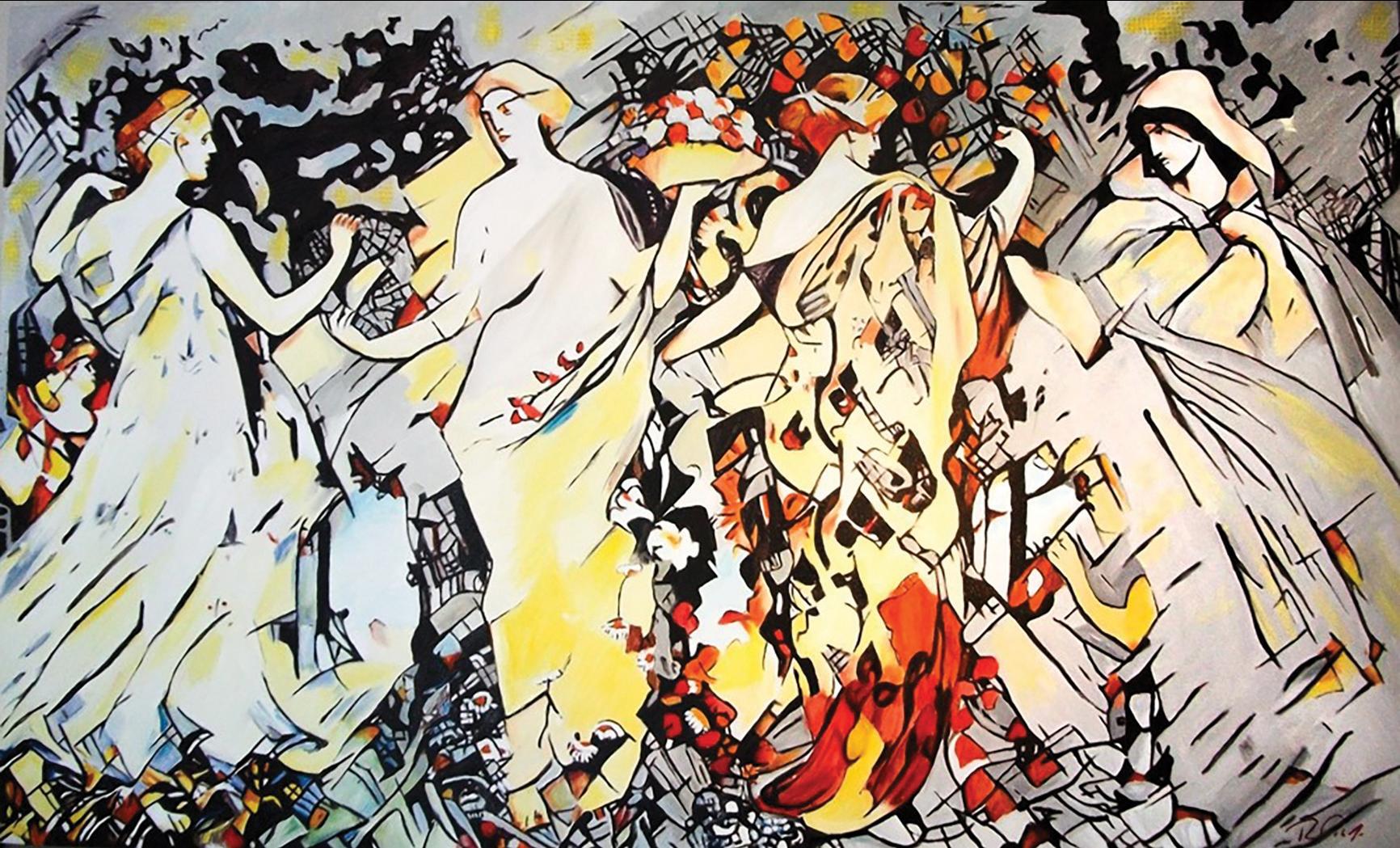 Your academic background as an engineer requires a study of structure, symmetry, analysis, balance and precision. However, these new works show a different side of you – these nine paintings are semi-abstract in some cases while others border on total abstraction. I still feel that there is still a measure of structure in the deconstruction. Am I off the mark?

As you stated, I have been a professional engineer since 1976 and I had been wading in the arts before that time, mainly due to being taught art by Antoine Camilleri. I actually wanted to be an architect, a career in which I could show off my structure-design creativity, coupled with structural engineering.

All this was, however, proving to be too disciplined, structured and too regimental. I hated to be constrained and to keep my ‘sanity’ in check, I used my art to lead me to safer paths. This affected also the way I was painting, and I wanted to be more free and less constrained in the way I held my brush and applied colours. 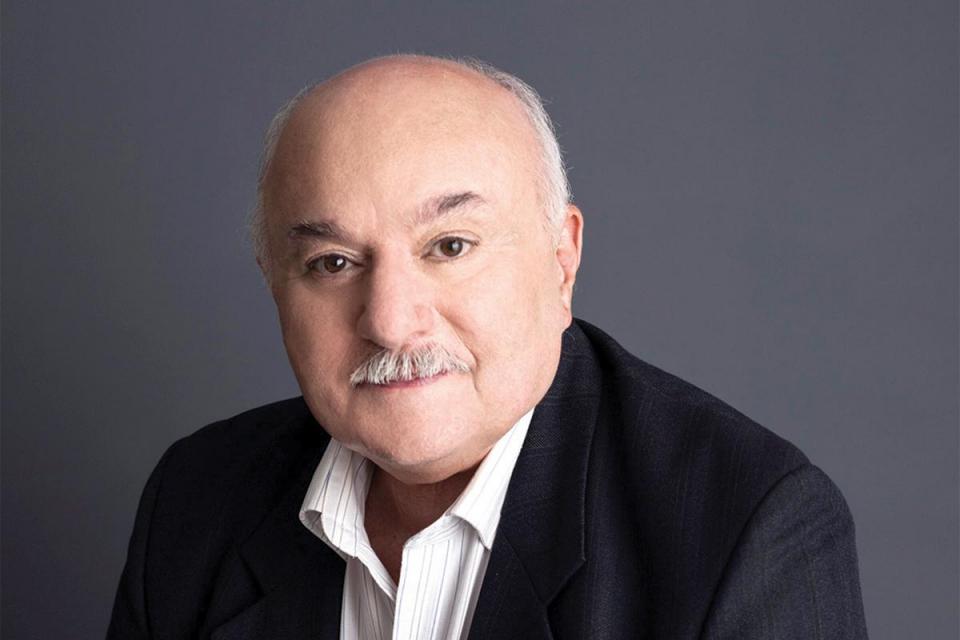 I can say that just after 2002, I had produced very vibrant abstracts utilising a swiping (scraping) technique, much like Gerhard Richter’s own. When in 2009 I attended a master art class under Hubert Scheible in Salzburg Austria, I realised how much this technique was in vogue at the time. It gave me more freedom to express what I felt inside.

With the onset of COVID-19 movement restrictions, I migrated to producing the types of abstracts I am exhibiting now at the Cavalieri Art Hotel.

A measure of structure is still evident mainly because the concept of my works centres on mass solidarity at a time when humankind is faced with external threats akin to a world war. So one can detect a group (structure) of people in (On the Mount, Back to the Roots, Banished from Syria) and others. It was intentionally put that way to stress a point. Only as a group (structure) can we eradicate death, sickness, poverty, hunger, exploitation, and genocide.

To understand me, ...search beneath the aesthetics

In your previous work, there was the influence of American Pop artists like Andy Warhol, Roy Lichtenstein, James Rosenquist and British Richard Hamilton. Andre Masson, the precursor of Abstract Expressionism, and the abstract expressionists Lee Krasner and Jackson Pollock all started out as figurative artists but surrendered this in favour of gestural strokes that nodded towards total abstraction. Was this a natural step for you to venture out of a pop sensibility into the American precursor of it, an Abstract Expressionist one? 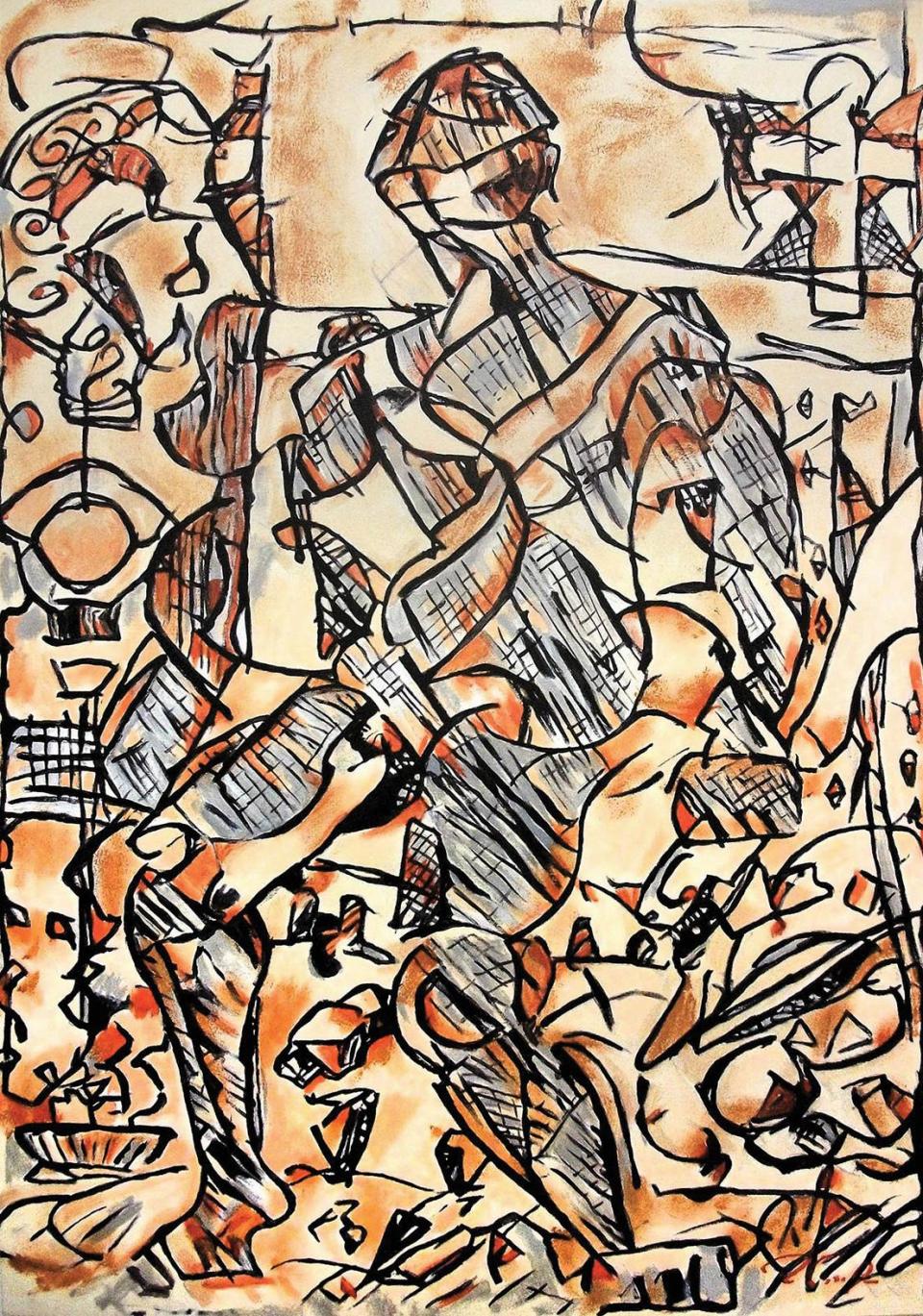 I feel, in retrospect, that every artist undergoes migration from one phase to another, largely as a result of certain impulses. Experiences or episodes in one’s life leads one to this, much like Picasso progressed from his first works to the blue/rose/ African and cubism periods. I guess I migrated naturally through successive phases through my artistic journey as a result of life situations. One artist may be free in his artistic expression that may eventually force him into a cocoon and close up. Others may be undergoing a constrained phase and as a result of the constraints (could be mind-driven) to explode into a Gutai type of art or whatever the way I paint is called.

At this point in time, I feel that I can articulate whatever comes to mind directly on canvas and that will be my statement of expression of what is deep within me. It may be semi-abstract or a total abstraction, I care less about the rigid structure of what the style of painting is called than with the message I want to convey. However, I still feel that I must do it in a way that communicates to others in a proper manner rather than painting a statement for aesthetic value only. 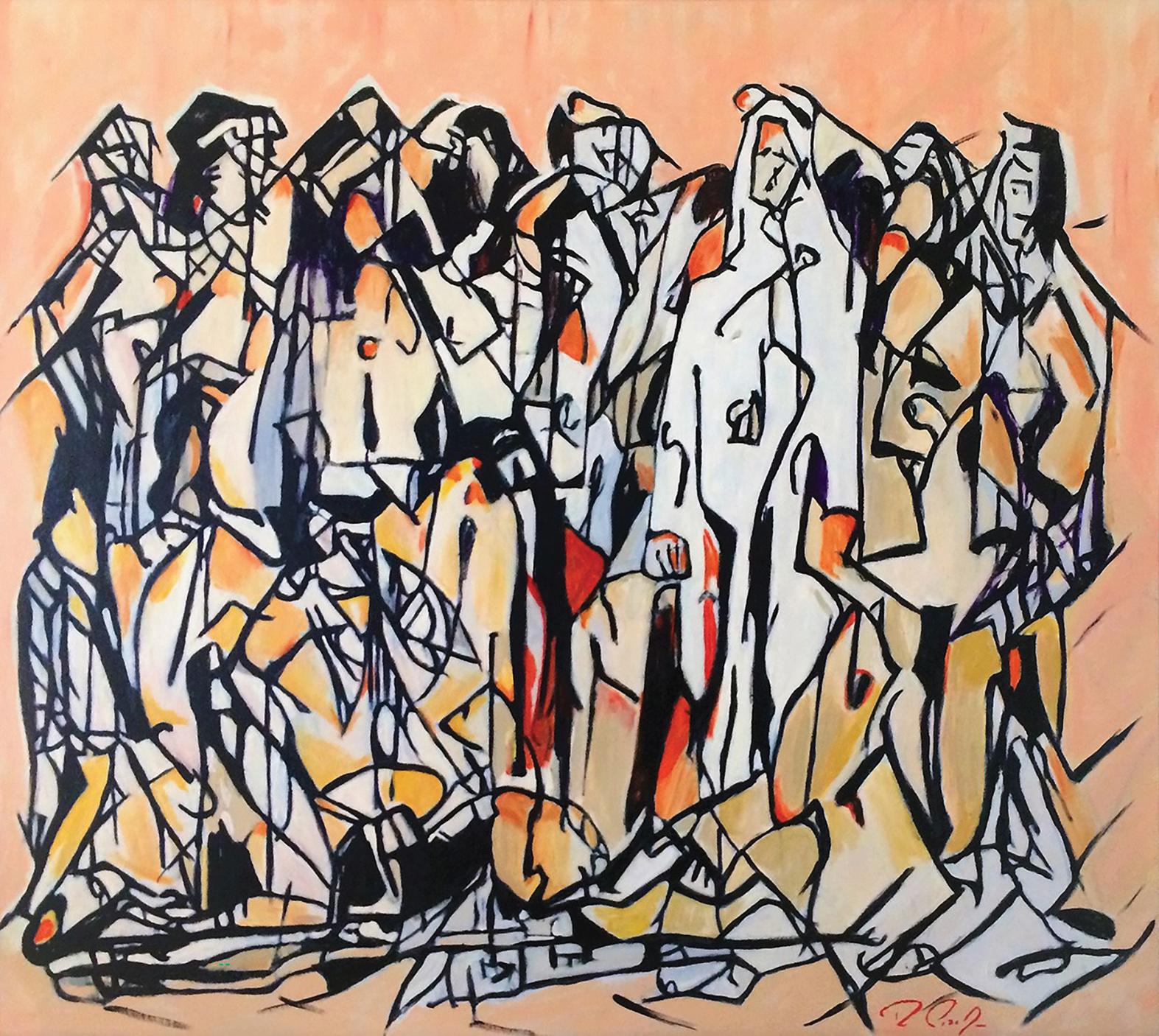 Picasso re-interpreted the Rape of the Sabine Women, a theme that was extensively explored by artists such as Rubens, Poussin, Luca Giordano and others. Michelangelo’s Battle of Cascina similarly portrays bodies amid huge human drama and turmoil. Whereas the above-mentioned artists documented mythological or historical events, you are docu­menting actual contemporary drama. Do you consider your paintings Banished from Syria as a continuation of these artistic conversations on human strife?

I also explored the Rape of the Sabine Woman and displayed it with success at the New York Art Expo. I also explored Leonardo’s The Battle of Anghiari. Human suffering is as close to my heart as my brushes are to my hands. Having undergone extreme situations in life myself (three near-death experiences), I guess that representations on human suffering come automatically as a major theme in my paintings. Banished from Syria is perhaps a culmination of this conversation topic as I could not stand there in my studio painting themes unrelated with suffering when thousands of children, fathers, mothers and grandparents had been banished from their homes and had to walk miles on end without food and water and with the fear of being macheted to death.

Banished from Syria is a monumental work of art (280cm x 100cm) that saw me feverishly carving out (with my brush of course) the figures of frightened human beings looking for hope and a promised land away from a certain death. One could detect outstretched arms, children, women and men. My only wish is to see this work in the foyer of an organisation that takes care of migrants, nationally or internationally. I donate it freely as a gesture of hope and of my prayers for the deliverance of these people and millions of others like them in many other places, including the migrants who are pushed back from Malta.

A Masque for Four Seasons contrastingly deals with movement in repose, a re-interpretation of a classical theme via Walter Crane. Your deconstruction seems to suggest a contemporary decay of iconic images, I’m not meaning this in a negative way. Does art have to follow the signs of the times or does it still perform its traditional role of an aesthetic expression of beauty?

To my mind, an expression of beauty per se can only appeal to a section of the public. If there is an embedded message with an aesthetic expression of beauty then the outcome can be more satisfying, wholesome and inspirational to a larger genre of people. It could be that neo-Romanticism appeals to a section of people. Like I said earlier, whatever art I see in front of me, my mind transforms it into another perspective, another reality which has meaning for me.

I have not studied history of art; I have only watched films and read books about the masters Modigliani, Picasso, Van Gogh, Klimt, Michelangelo and others.

The things I learned from them is how art was entwined with the fabric of their personal life. They died for their art. They strove to produce works of art in whatever form or shape and that is what matters. Inspiration is inspiration and it leads to something good. If one creates art for an end rather than artistic, then it’s a fake. The embedded meaning should be the motive force. The Masque for Four Seasons originally started a work for somebody, but I realised that my life was also undergoing ‘seasonal’ changes, so I kept it for myself.

We are on an eschatological journey with our lives, taking everything that is thrown at us but trying to learn from each experience that comes our way. In that way we become purer and aim towards reaching the divine.

The artworks discussed in this interview, and others, are currently exhibited at the Cavalieri Art Hotel.