Fleeing their home after the La Palma volcano erupted on September 19, one couple married nearly 60 years decided to seek safe haven aboard their tiny boat until the storm passed.

When the evacuation order came, neither Margaretha Straates, 80, nor her 90-year-old husband Luis Rodriguez Diaz fancied the idea of staying in temporary accommodation.

“It suddenly came to me, why don’t we try the boat? It’s only an old boat, but we could take a few things and settle in,” Rodriguez Diaz, a retired gastrointestinal surgeon, told AFP.

Just 6.4 metres long, the Hamurabi is a tough little boat that has only needed one engine change in 35 years, he says.

But it is big enough for him and his Dutch wife who sit with their backs to the volcano, which keeps up its endlessly explosive activity.

"Despite their situation, the pair are lively, chatty and in good spirits, perhaps helped by a lifetime of moving house"

Together, they pass the time on the boat’s tiny deck with a radio, her computer with Wi-Fi, a small fridge and an adopted cat they picked up while fleeing, and who bolts into the cabin when visitors arrive. 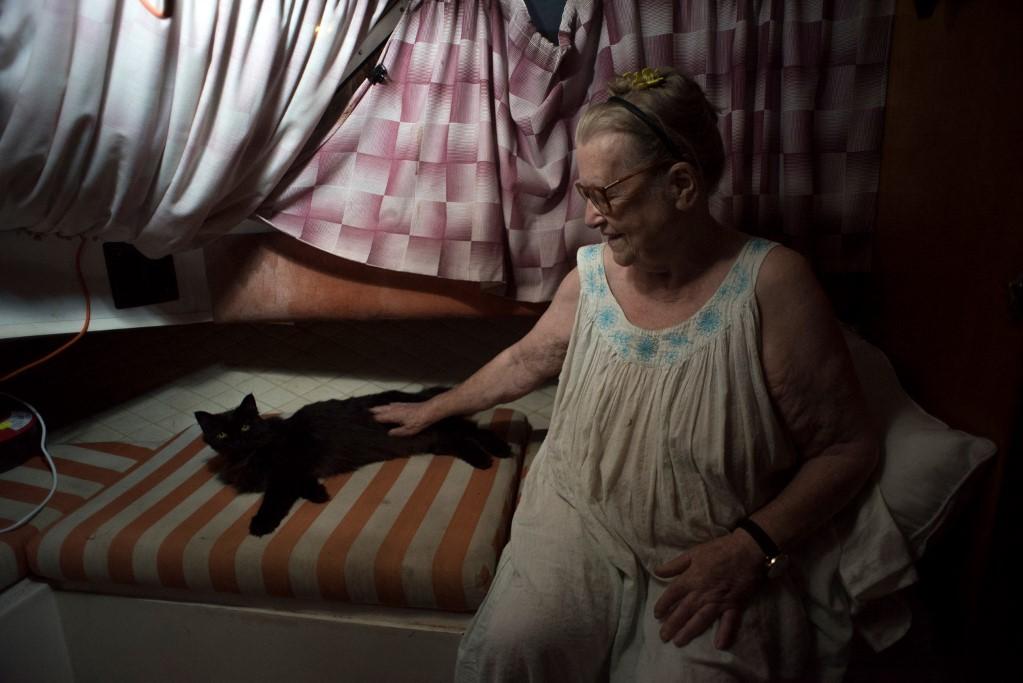 Margaretha Straates sits next to her cat on the boat.

The space is small and requires careful navigation, with Straates often forgetting to duck her head to enter the cabin.

The pair are residents of Todoque, a village almost totally wiped off the map by the lava.

When the order came, they had to leave very quickly.

“The Guardia Civil police came and told us: ‘You need to evacuate right now, very quickly’ so we left in what we were wearing,” says Rodriguez Diaz.

They never thought the eruption would be so violent and destructive, lulled into a false sense of security by the eruption of La Palma’s Teneguia volcano 50 years ago “which was a friendly volcano that didn’t do much damage”, says Straates.

Over the past 16 days, the erupting volcano has destroyed more than 1,000 properties, many of them homes.

On Sunday, they heard that their house was still standing but that was not enough to ease their distress. 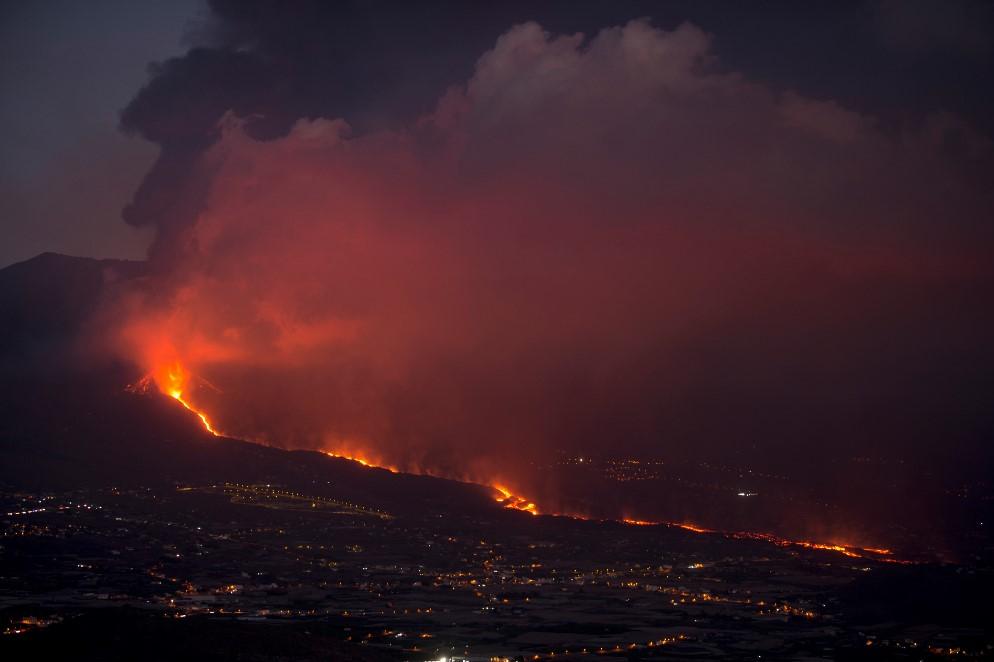 The Cumbre Vieja volcano, pictured from Tijarafe, spewing lava, ash and smoke, on the Canary Island of La Palma on October 5, 2021.

Despite their situation, the pair are lively, chatty and in good spirits, perhaps helped by a lifetime of moving house.

He is from the northwestern tip of Spain, while she hails from Amsterdam.

During the 1950s, Straates went travelling around Europe on a trip that was paid for by his sister after he passed his medical studies.

“I was in a park in Amsterdam with my best friend and we met the sexiest man I’d ever seen,” she recalls. She was 16 at the time.

They swapped addresses and got married a while later in Gibraltar because, at the time, only religious marriages existed in Spain.

They lived in London for a while then in the British colony of Rhodesia – later Zimbabwe – where Rodriguez Diaz held a very senior health role.

In 1977, they decided it was time to move back to Spain given the instability in the British colony, which would gain its independence three years later – and because the Spanish dictatorship had ended with the death in 1975 of Francisco Franco.

“Now that Franco’s regime has gone, it’s better to go back to Spain as I’m getting older,” Rodriguez Diaz told himself, fearing otherwise he would never go back.

After nearly 60 years of marriage, a volcanic eruption and two weeks cramped into a tiny living space has given rise to a few arguments, but nothing they have not been able to handle.

And their faces are well known at Tazacorte’s harbour, which has drawn dozens of visitors in recent days for its view of the volcano’s mouth, its lava flows and the place where the molten rock enters the sea.

At the port are showers, washing machines and restaurants, and although they can go up to their village, no one can say when they will be allowed to go home.

“No one at all,” sighs Straates.

"After nearly 60 years of marriage, a volcanic eruption and two weeks cramped into a tiny living space has given rise to a few arguments, but nothing they have not been able to handle" 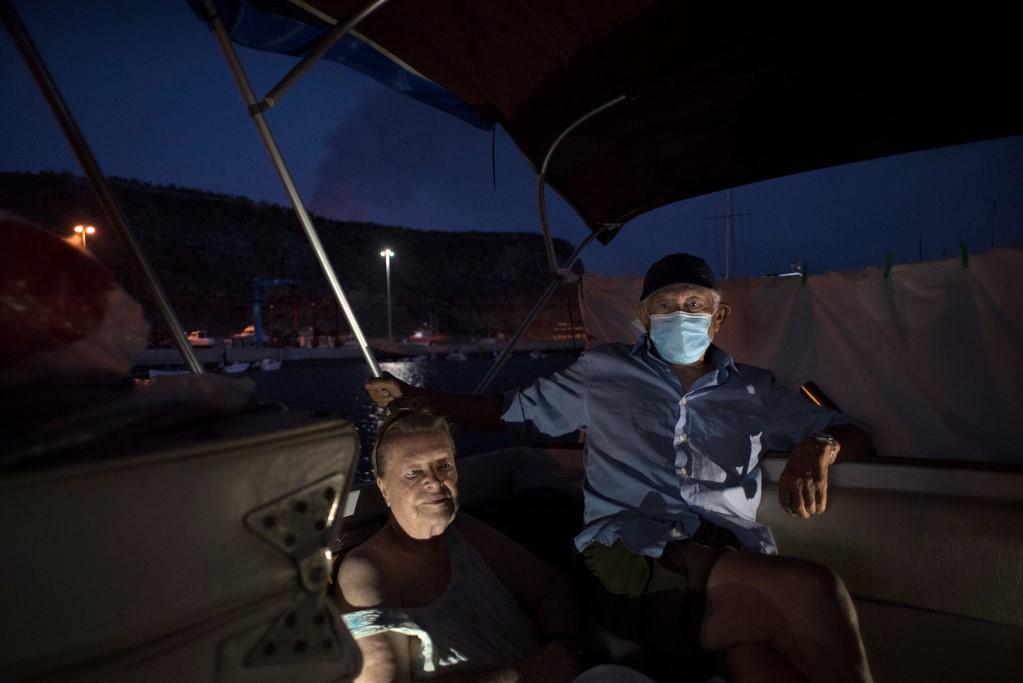