During a game against Msida St Joseph on Saturday, Toni Bonello, a 37-year-old veteran of 293 games, was joined on the pitch by his 17-year-old son, Damon, a youth player making his first ever appearance for the team. 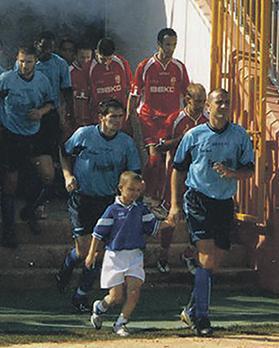 Tony Bonello stepping on to the pitch for one of his 293 career matches, accompanied by his son Damon, then still a child, as the mascot.

A father and son duo playing for the same team at once is a rare enough event, but what happened next was almost unheard of: a loose ball from a corner was enough for Toni to grab a goal, while a late penalty from Damon completed the achievement.

It was one of the first times ever that a father and son had scored in the same game anywhere in the world. Rivaldo, the World Cup winner, and his son Rivaldinho managed the feat last summer in the Brazilian second division, but there are no other recorded instances.

“When he scored, it was like my feet were stuck to the ground; it was very emotional,” the older Mr Bonello told the Times of Malta of Damon’s goal.

“It was always my dream to play on the same pitch as him, but I never thought it would happen. You try, in the moment, to see him as a teammate, but he’ll always be your son.”

For Damon, described by officials as one of the club’s most promising young talents, sharing the field with his father was also a special moment.

Having grown up watching his father from the sidelines in a long career spanning clubs across Malta’s top divisions, he said he always knew he would one day follow in his footsteps. The chance to do it before his father hung up his boots, then, was icing on the cake.

“I’m still at the start of my career, but I look at his achievements and I hope I can achieve the same thing; even if I don’t, I’m proud to say my father achieved so much,” Damon said. “It’s not only about this game. Even training with him is great. Obviously he gives me more guidance than the other players do; he helps me, he pushes me.”

It was always my dream to play on the same pitch as him, but I never thought it would happen

For Żabbar St Patrick, meanwhile, the pair’s one-off achievement was a vindication of a commitment to youth and community sustained throughout the club’s 104-year history, Damon having been part of the club’s nursery since he was four years old.

Nearly all of the first team squad are also nursery graduates, many are from the town of Żabbar itself, and the club also boasts the youngest squad in their division.

Bulgarian coach Atanas Marinov said feats like the one the club witnessed last weekend – already so rare – were only going to become less likely as the years go on, with new rules making it easier for clubs to abandon their home-grown roots in pursuit of a quick rise to glory.

But Mr Marinov was adamant that, as evidenced by the father and son duo, there was still something to be gained from a patient approach, with the community at the forefront of the sport.

“We didn’t engineer this for press attention, they’ve earned it,” Mr Marinov said. “This achievement will remain in the history of their family, of this club – even of Maltese football.”