Updated at 7.15pm with protest

A group of people this evening met in Valletta in remembrance of women who have been tragically killed by their partner.

“I cannot mention all the women who on a daily basis are being verbally abused and made to feel worthless…. They are too many. But together we can rise for them and bring a voice where there is none. All are too many,” family lawyer Lara Dimitrijevic, who also runs the Women’s Rights Foundation, said in front of Parliament. 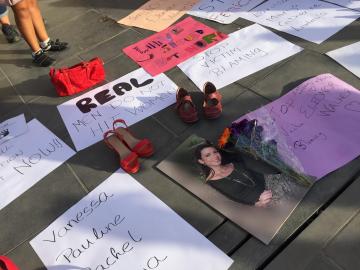 Some of those at the protest held up placards with the names of homicide victims, while others laid down red shoes - a symbol of the struggle for women’s rights and a reminder of femicide – in front of the Parliament building. Others wore orange, symbolising violence against women.

The One Too Many protest march was prompted by the murder of Eleanor Mangion Walker, mother of a nine-year-old girl.

Ms Mangion Walker’s corpse was found last week in a plastic bag in an unused Qormi warehouse after a close relative of her estranged husband reported the murder to the police.

Two days later, two 48-year-olds were released on bail after being charged over separate, unrelated incidents of domestic violence.

“We need to come together as a society to work towards ending violence against women and call on the government to stop delaying the implementation of the Istanbul Convention.”

Malta signed the Istanbul Convention in May of 2012.

It was ratified in July of 2014 and entered into force the following November. However, to date, it has still not been transposed into Maltese law.

Among other things, the convention calls for an authority to remove the perpetrator from the home. However, women and children in Malta still have to leave their belongings and their home and seek refuge elsewhere.

It also calls for a temporary protection order until a court hearing, but women in Malta are still being harassed and stalked by their former partners. Such a protection order would give some respite and a sense of safety to abused women, who might feel empowered to take action and start court proceedings, Dr Dimitrijevic explained.

Apart from being part of society themselves, men also have female relatives who could end up victims of violence. Men needed to show that they too were against violence, and they were obliged to speak up against violence against human beings, he added.