Daphne Caruana Galizia's family have accused an employee at the Office of the Prime Minister of stalking the late journalist one day before she was murdered.

In a criminal complaint filed late yesterday, the Caruana Galizia family said Neville Gafà "and/or a person known to him" followed Ms Caruana Galizia and her husband Peter around Floriana and took photos of them on the afternoon of Sunday October 15. 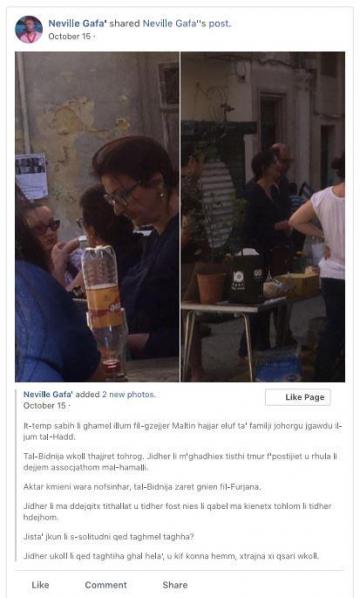 Citing Facebook posts and photos Mr Gafà uploaded to his personal profile as evidence, the Caruana Galizia family said that the behaviour qualified as stalking according to Malta's criminal code.

On the day, Mr Gafà had uploaded two photos of Ms Caruana Galizia, writing "earlier in the afternoon, the Bidnija woman visited a garden in Floriana. It seems she didn't mind mingling with people she would previously have never dreamt being seen alongside. Is solitude kicking in?"

In the criminal complaint, the Caruana Galizia family cited article 251AA of the criminal code, which lists offences that amount to stalking (see below).

According to local laws, anyone found guilty of stalking is liable to a six-to-12 month jail term or fine up to €10,000.

Ms Caruana Galizia was killed in a car bomb on the afternoon of Monday October 16.

Mr Gafà made headlines last year after a whistleblower alleged that he pocketed thousands of euros as part of a medical visa racket while working at the Health Ministry.

The claims were picked up by Ms Caruana Galizia, who in a series of blog posts accused Mr Gafà  - who has denied the allegations - of being "corrupt".

The case is currently before the courts.

Earlier this month, Times of Malta reported that Mr Gafà  had been given a position at the OPM's customer care unit while receiving a salary far higher than that of his colleagues.

What constitutes stalking according to local law?

Stalking was included as a specific crime in Malta's criminal code in 2014. Article 251AA, which deals specifically with it, state the following:

(3) The following acts shall be deemed to be acts of stalking:
(a) following a person,
(b) contacting, or attempting to contact, a person by any means,
(c) publishing, by any means, any statement or other material
(i) relating or purporting to relate to a person, or
(ii) purporting to originate from a person,
(d) monitoring the use by a person of the internet, email or any other form of electronic communication,
(e) loitering in any place, whether public or private,
(f) interfering with any property in the possession of a person,
(g) watching or spying on a person.

(4) A person guilty of an offence under this article shall be liable to the punishment of imprisonment for a term from six to twelve months or to a fine not exceeding ten thousand euro(10,000), or to both such fine and imprisonment:

Provided that the punishment shall be increased by one degree when the offence is committed against any person mentioned in article 222(1).