Facebook users are being bombarded with pro-government fake news propaganda, but the Office of the Prime Minister would not comment when asked on the matter.

Featuring photos of the Prime Minister and senior Cabinet members like Edward Scicluna and Konrad Mizzi, this ‘campaign’ has been going on for weeks. Its ultimate objective is to lure the Maltese to invest their savings in the high-risk bitcoin, cryptocurrency and blockchain technologies.

The timing of these “sponsored adverts” – the term used for formal advertising on social media – has fuelled confusion among Facebook users as it coincided with the government’s push for Malta to become the world’s “blockchain island”.

Last summer, the Maltese Parliament enacted three laws that established “the first ever regulatory framework”, which were hailed by the government as the first of their kind of the world.

The move was justified on the grounds that this would put investors’ minds at rest.

The government’s bold support for this emerging industry was on show last November during the Malta Blockchain Summit which attracted some 5,000 delegates and hundreds of investors.

That same month, however, sponsored adverts started appearing on Facebook, normally under the guise of a news story with sensationalist headlines, such as, ‘The government swears to boost the income of all citizens’.

Keen to lure potential investors, the publishers topped up the story with comments such as “All Malta citizens age 30-50 must NEVER miss this!”

All of these adverts converged to a common page, bearing the CNNtech logo announcing a “$500 million deal with The Bitcoin Revolution”. Apart from the fact that no such deal has ever happened, a closer inspection on the page’s internet address reveals that this is a scam as it has no relation whatsoever to CNN.

Yet, for those falling in the trap, the page would redirect them to another site titled “Bitcoin is making people rich” whereby one would be encouraged to enter personal details to receive more information. All this was packaged together with the logos of renowned internet security companies such as Norton, and McAffee to lead the user into believing the site was genuine and endorsed by these brands.

Times of Malta sought to clarify the matter with the government through a series of questions sent last week to the Office of the Prime Minister.

Apart from an official statement confirming that the government had nothing to do whatsoever with this scam, the Times of Malta asked what steps had the OPM taken in this regards, such as contacting Facebook to denounce these ads and possibly identifying who was trying to con Maltese investors. However, no reply was received by the time of writing. 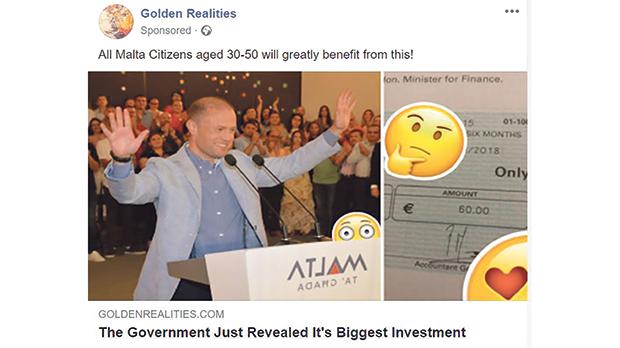