Following a two-hour court case, he lamented that it was unacceptable to have come to a situation where the Opposition leader had to go the magistrate with evidence rather than having the police commissioner investigate, even though he had been sitting on the evidence for several months.

Among other evidence, he said Nexia BT's Brian Tonna claimed that Mr Hillman was paid by Mr Schembri for editorial and publishing consultancy – even before Labour came into government, according to Dr Busuttil.

Dr Busuttil stressed that if the Prime Minister persisted in saying that the allegations were not backed up by proof, he would have no qualms about publishing the evidence he had just given the magistrate.

The Opposition leader claimed during a televised press conference last Wednesday that this was a "textbook case of bribes and money laundering".

Mr Schembri allegedly used bank accounts in Switzerland and Gibraltar, as well as the Ta' Xbiex-based Pilatus Bank, to pass the money to Mr Hillman directly or through his secret company Lester Holdings with the assistance of “the other accomplice” Brian Tonna, without any verification process. 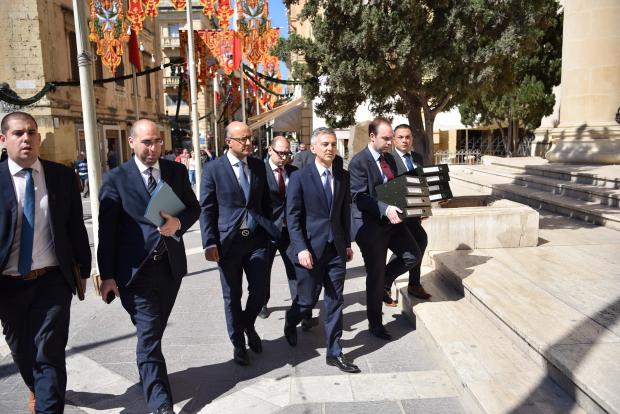 He insisted that the claims against Keith Schembri are related to his private business and his dealings with Adrian Hillman. It was duly investigated – Times of Malta found nothing wrong and they should publish the facts.

"It was duly investigated by Times of Malta which found nothing wrong... and they should publish the inquiry," he said.

He insisted that Dr Busuttil is riding on the crest of a lie where secret Panama company Egrant is concerned.

"Busuttil forced people to take to the streets, his claims hounded my family, and he will have to answer for that... It’s his problem, not mine."

Asked why he had still not chosen to appear in front of the Pama committee, Dr    Muscat replied he would appear once the magistrate's report is concluded

"I will attend the Pama committee to explain how the Opposition fanned this calumny against my country."