Opposition MPs walked out of Parliament on Tuesday evening after a request for a statement on allegations that Economy Minister Chris Cardona was seen drinking with one of the men accused of the Daphne Caruana Galizia murder was denied.

Speaking of a "culture of fear and silence", Nationalist Party leader Adrian Delia pledged to ask all the questions that the public was entitled to.

The walk-out came a few minutes after stories as part of the 'Daphne Project', an international collaborative journalism project including Times of Malta, were uploaded on Tuesday.

In making his request, Dr Delia called upon the Home Affairs Minister to deliver a statement on the allegations, asking whether Mr Cardona had in fact met the individual in question.

The people are asking questions about these serious allegations and the Government stopped short from providing any #answers. The people deserve the #truth! #justice @TheTimesofMalta @PNmalta

Government Whip Byron Camilleri pressed him to indicate under which paragraph of the standing orders of the House he was making his request. He then requested that Deputy Speaker of the House, Claudette Buttigieg continues with House business following the Opposition leader’s failure to indicate the above.

No ministerial statement was delivered.

While Democratic Party MPs did not walk out with the Nationalist Party, PD MP Godfrey Farrugia expressed his concern at the allegations, arguing that this was a “moment of truth” which needed to be addressed responsibly.

In a statement, the PN said a “serious, independent and credible” investigation into the claims, with no political interference, should be called immediately.

"The PN asks that the government comes clean with the truth to end the damage to the country’s reputation as a result of the government’s attitude of impunity," the party said, adding that all eyes were currently on Malta. 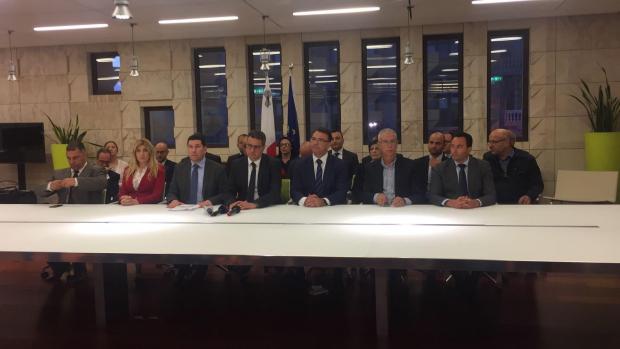 Adrian Delia addressed a news conference after the news emerged.

PL lashes out at Delia

The Labour Party said Dr Delia was forced to speak out so as to appease those who fail to recognise him as PN leader.

"If anybody has any information he should resort to the investigators, who have led three people to face charges in court. Justice is not served through speculation and vindictiveness."

Meanwhile, the PN leader should start speaking out about his "latest lie" related to his tax arrears totalling tens of thousands of euros.

Partit Demokratiku condemned the fact that the government was refusing to give a ministerial statement in Parliament in view of what was being published by the international media.

Although it condemned the government’s behaviour, it did not leave the room like the Nationalist Party did but opted to remain the people’s voice, it said.

Addressing a press conference this evening, Dr Delia said that the Opposition would not stop asking questions, even if the government actively tried to shut it up.

“We are here to make pertinent questions. Is it true that Chris Cardona had spoken with the accused? Is it true that the Prime Minister was aware and if so, why didn’t he speak up?” Dr Delia asked.

He went on to call for political responsibility over the murder of Ms Caruana Galizia, insisting that this was the case everywhere in the world except in Malta.

Dr Delia also accused the government of constantly trying to spin information so that people only heard of the good news, pointing to economic success as an example.

“Is everything business as usual, as was the case in parliament this evening?
Government speaks of surplus but not of the moral deficit because we think that people depend on what is handed to them by the government,” Dr Delia went on.

He also reiterated calls for the removal of the Police Commissioner, insisting that he was the Prime Minister’s “puppet”.