Orchids are a family of plants that are considered among the most evolved in the kingdom of plants. They are thought to have been descended from the family of lilies, which had evolved very quickly to become among the most adapted and diverse flowering plants in the world.

The odd names of some orchids, such as the Flying Duck orchid, the Naked Man orchid, the Holy Ghost orchid and the Octopus orchid witness with some imagination the diversity of this family. 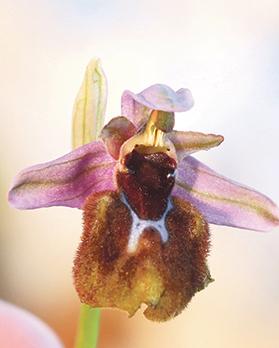 Ophrys gaulosana is characterised by pink sepals and a very small shiny patch originating from one parent (Sawfly orchid).

The way orchids evolved allowed them to grow on tree branches in tropical forests rather than in soil, although in Europe all orchids are terrestrial. The morphological evolution of orchids is mostly manifested in their flowers principally to over compete other neighbouring flowering plants for attracting pollinators towards them.

Some orchid flowers evolved to have trapping chambers or love cages such as in the Lady Slipper orchids (e. g. Cypripedium species). Other groups of orchids called the ploughshare orchids (Serapias species) provide a warm shelter to attract them during adverse weather conditions.

Still, the most amazing strategy to attract pollinators is that found in the bee orchids (Ophrys species) where the shape, colour and scent of their flowers mimic female insects, primarily bees or wasps to attract specifically males and luring them to copulate, so as to carry out pollination, hence the transfer of pollen from one orchid to another.

Some 20 bee orchids occur in the Maltese islands of which three are reported to be found only in Malta and hence termed as endemic.

The Maltese spider orchid (Ophrys melitensis) and the Maltese pyramidal orchid (Anacamptis pyramidalis subsp. urvilleana) are both well-known species for those who enjoy walking the rocky parts of the Maltese countryside.

During my research about orchids, working at ecoGozo (Ministry for Gozo), I encountered a very rare orchid known as the Sawfly orchid in Gozo.

However, the exciting news was still to come when another orchid spotted in the vicinity of the sawfly orchid was not familiar. This became more interesting when after studying all the morphological characteristics of this individual, it did not match out with any described orchid.

This became more interesting when after studying all the morphological characteristics of this individual, it did not match out with any described orchid

Further studies made it evident that this orchid is a hybrid between the endemic Maltese spider orchid and the Sawfly orchid, both growing together. I published a scientific paper to formally describe the new orchid from Gozo and which I named  for the island using the botanical name Ophrys gaulosana, attributed for the old name used for the island of Gozo – Gaulos.

It is the first time that a scientific name alluding to Gozo is validly given to a plant; indeed most endemic plants bear the name ‘melitensis’ (belonging to Malta). The common name for this orchid is the Gozo Spider Orchid (or Gozo Bee Orchid) or in Maltese Brimba t’Għawdex.

Only one plant has been found in Gozo and it is currently reckoned as an endemic to Gozo. The rarity of one parent (the sawfly orchid) in the Maltese islands and the endemism of the other parent makes the Gozitan Bee Orchid as one of the rarest terrestrial orchids.

The orchid is characterised by pink sepals and a very small shiny patch originating from one parent (Sawfly orchid); shaggy long hair and a lance-shaped upper petals inherited from the other parent (Maltese spider orchid) and a mixture of yellow and brown hair considered as an intermediate state from both parents.

Overall the orchid has a unique light brown colour with mauve sepals and a bright, small horseshoe-pattern at the centre. The directorate of EcoGozo within the Ministry for Gozo is delighted that the research invested is giving such important results for our local biodiversity and the environment.

This is a Times of Malta print opinion piece