Fusing two nouns as a symbolic representation of two strands within an artistic family, V O/E Racity – A Dialogue showcases Paul and Thomas Scerri’s individual, artistic approach to the plight of our environment. Review by Joseph Agius.

Families of artists are an interesting, though not uncommon phenomenon, in the art world. There are a number of them in the history of Maltese art. The Schranz, Busuttil, Calì and Caruana Dingli families boast a number of artists that have been of considerable importance in the development of a national art that, although rooted in the aesthetics of overpowering neighbours, held its sway and was worthy of ecclesiastical, aristocratic, and alternative patronage. 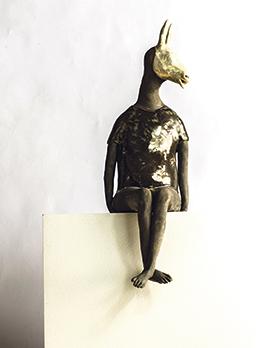 The birth of Modernism in Malta and its aftermath produced a number of artist families who were enriching and conducive to an intimate exchange of ideas within these families themselves.

In Malta’s 21st-century scene, Paul and Thomas Scerri steal the limelight, with the former being one of Malta’s foremost sculptors and the latter successfully following in his father’s footsteps. The exhibition held in Gozo is a celebration of this familial relationship.

The title of the exhibition gives the game away – a combination of two directions and two different conceptual origins is evident in its choice. The vowels ‘e’ and ‘o’ are interchangeable. One is justified if one experiences some hesitation and head-scratching while coming to terms with this orthographical ménage. The dual meaning illustrates a divergence of concepts. It seems as if the elimination of one vowel in favour of another is enlightening towards one artist at the expense of the other at some biased level.

The art of father and son originates from an ache, a marked awareness that the natural environment in the Maltese Islands is exploited, milked dry

Paul is ‘veracity’ while Thomas is ‘voracity’. The fusion of these two nouns acts as a symbolic representation of two independent strands within an artistic family that come together for this exhibition in a hybrid-like form, complementing each other while maintaining a detached individuality. It is a display of cross-fertilisation without any sign of an overbearing paternal influence.

Paul’s significant fame as one of Malta’s most important contemporary sculptors arises from a repertoire of very successful solo exhibitions that struck an anthropological chord and intelligently asked very relevant anthropocentric questions. 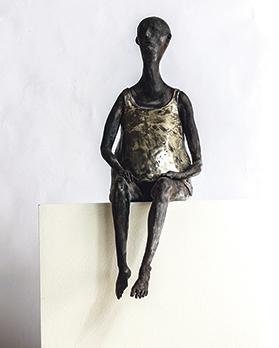 His subjects are anonymous characters representing members of a society that is uneasy, judgmental, unpleasant, apathetic, and – in some cases – at the end of its tether.

Jamie Wyeth, the artist son of Andrew Wyeth, claims that: “People I pick to paint –it’s not their physiognomy but what they’re about. You have to know everything about them. Otherwise, it’s just skins.”

I believe that this is also true of Paul’s art. The anonymous facial features are so deftly given an identity that immediately categorises them together in view of their psychological states.

This small crowd of individuals meets together in the exhibiting space and one would expect them to exchange pleasantries, swear at each other, discuss politics and football, and painfully co-exist.

Paul’s intention is not to mock with caricature. These are silent folk who experience life, assess it, and finally don’t give two hoots if it stagnates, deteriorates, or disintegrates. Scerri chooses diligently, captures the essence, and recreates a likeness that is more than skin-deep. He represents them as blind, blindfolded, or as pushovers – which is a cruel but honest comment on how blinkered and easily manipulated contemporary society can be.

The art of father and son originates from an ache, a marked awareness that the natural environment in the Maltese Islands is exploited, milked dry, and shortsightedly regarded as the fastest lane towards financial success.

Here, the infrastructure of the island cannot support the number of vehicles on the roads. The widening of the roads network is seen as the obvious treatment to an ailment for which there is no cure, as there is no inclination towards implementing a drastic solution.

The first victims of this are the trees themselves, which are uprooted to accommodate a lazy population and a fetishist necessity to own a car.

In an unfortunate accident early this year, some tourists lost their lives and the scapegoats were the trees themselves. An infantile programme followed, as a result of which a number of trees were summarily butchered instead of being pruned for safety.

The road-widening projects contributed to more trees being chopped up. Thomas Scerri collected some of these fragments, these relics of human disregard, and incorporated them into his pieces.

The German philosopher Martin Heidegger postulated that “nature is a ‘standing reserve’. It’s seen as a resource ready to be exploited for the benefitof humans.”

This reserve of dead wood that has undergone terminal exploitation found its way into the form of Thomas’s sculptures, whose very nature is organic. They serve as a testament that unyielding metal and pliant wood can hauntingly recombine into something beautiful.

The metal of heavy machinery destroyed the tree in its prime. Thomas uses metal to act as crutches, prostheses to these limbs of martyred flora.

The titles of the works evoke a sense of irrevocable loss that one finds in the aftermath of a war, in the tang of a dirge, and in the silent uselessness of a wake.

The branch relic of Difnuhom 1 is of indeterminate shape. A metal sheath covers it protectively, creating a phallic proboscis. The wheels of the walking frame deliver it from impotence and the immobility of death.  This deus ex machina is ready to exact some sort of revenge. 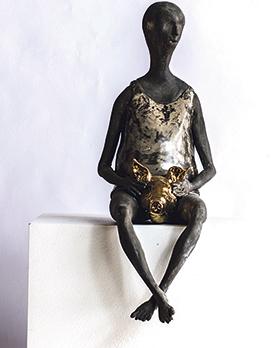 Keffnuhom 1 hints at a metamorphosis – the transformation of the wood relic into an insectile species whose metallic exoskeleton is menacing and ready to voraciously pounce on prey. Meanwhile, the dendritic relic of -aafnuhom 2 roots the sculpture steadily into the ground.

It supports the segmented metallic worm-like twin projections that flail heavenwards – like tentacles of a sea anemone.

All of Thomas’s sculptures are menacing, and they demand retribution as nature defends, reinvents, and transforms itself.

His work has an accidental component – that of the intrinsic natural form of the tree specimen. On the other hand, the metallic component shows restraint, technical bravura, and a clinical dexterity similar to that which is present in his father’s work.

Paul does not leave much to chance. Although an admirer of the output and spontaneity of the ceramic sculptures of Gabriel Caruana, Paul’s approach is alchemical and disciplined, and one that prohibits accident in the execution of his pieces. He is a master of the medium and he scientifically controls the creative process along the way.

The personages that make up Paul’s exhibits in V O/E RACITY have a common predecessor in a Żurrieq native who used to go for a walk in the neighbourhood of the Scerri household. His idiosyncracies attracted Paul’s interest while he was sculpting his first figure after years of abstraction. This epiphany resulted in Paul’s representation of the humanity that surrounds him at different times of the day. One human form was the template for the crowd that came forth along the years.

All of Paul’s works in this exhibition are at ease, sitting down or resting. They appear to be comfortable in their own skin.

All the characters display a quiescent attitude, which seems to suggest that there is a readiness in being listeners, but not necessarily in heeding advice. They seem to be set in their ways and are resistant to changes in their opinions and beliefs.

A number of them are at peace and complacent with their vices and shortcomings, holding emblems like medieval saints as tokens of their identifying attributes.

The subjects of the sculptures titled The Offer and The Dead Bird could be members of FKNK who employ rhetoric to justify the ‘necessity’ and tradition of their blood sport. They hold avian trophies that empower them as men, and their reckless disregard for a fellow creature’s pain is a mere trifle. Any control over their ‘hobby’ would emasculate them. 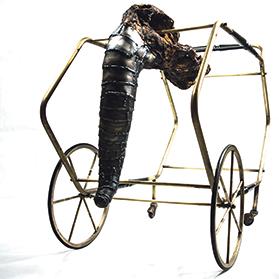 Apathy so eloquently portrays contemporary society’s behaviour and its reaction to the environmental mess that surrounds us. A general malaise in contemporary society, apathy sees us passing the buck, feeling helpless, and doing nothing to overcome this sense of worthlessness.

This increases the necessity for role models to decide everything for us and dictate our thoughts. In J.K. Rowling’s words, “Indifference and neglect often do much more damage than outright dislike”.  This particular Paul sculpture artistically evokes this very state of emotionless lassitude.

Depicting a subject with his feet crossed over one another and sitting on his hands, Ignorance is, perhaps, the senior artist’s strongest work. The comfort of hiding behind an asinine mask justifies any inanity or stupidity as the dehumanisation of the individual is complete.

Trolling behind a false identity is a convenient platform one can use to voice outrageous opinions that are not necessarily one’s own. Behaving like a total ass has its benefits, after all.

Avarice and Greed both lovingly cradle a golden animal’s head as an escutcheon that becomes self-explanatory in their hands. Blind Man’s Dream and Deciding What to See are complementary to one other. The blind man yearns to recover his sense of sight so that he can objectively experience the world around him, while his companion blinds himself in a deliberate act of denial.

This exhibition at Victoria Gozo’s Lazuli ART Gallery merges the veracity of Paul’s social commentary and the voracity of the heavy machinery that reduced healthy trees to Thomas’s mere relics. This father-son dialogue highlights contrasting views in concepts and their execution in a thematically unified whole.

Quoting T.S. Eliot: “We are being made aware that the organisation of society on the principle of private profit, as well as public destruction, is leading both to the deformation of humanity by unregulated industrialism, and to the exhaustion of natural resources, and that a good deal of our material progress is a progress for which succeeding generations may have to pay dearly.”  This is what this exhibition is all about.