When the Frendo family received news that 19-year-old Jerome had cancer for the third, and tragically, last time, Kenneth handed over his cheque book to his son.

"I told him: ‘It’s a matter of time – I promise you that we will make the best out of the time we have left together. Here you go, buy and do whatever you want’."

"I was lost for words. I didn’t know what to say or do, and that is the only thing that crossed my mind," Mr Frendo recalls one year after Jerome died.

Jerome just pushed back the cheque book, looked his father in the eye and said: ‘This is not what you taught me. We will enjoy whatever time remains’.”

Jerome died 16 months later, outlived by his inspiring messages, some of which he scribbled on pieces of paper that his mother Josette has hung up around the house.

The conversation that followed his third diagnosis brought to mind another one that no parent is ever prepared for. Jerome was 16, when in 2013 he was told he had a malignant and rare cancer, Ewing’s Sarcoma, which targets bones and soft tissue. 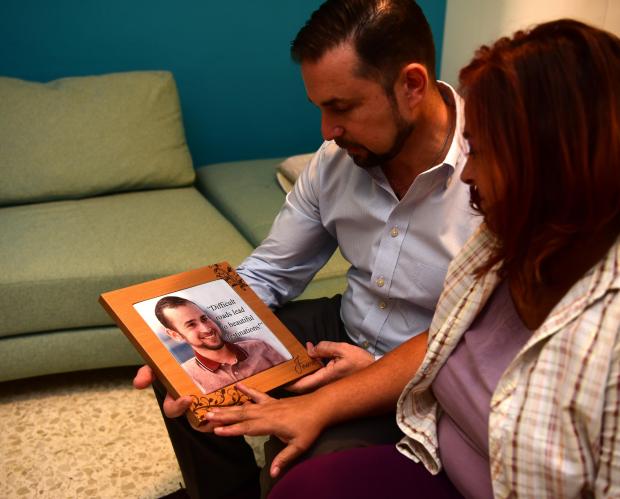 “I cannot describe what I felt. Jerome just turned to me and asked: ‘what are we going to do pa?’ I told him that we will do whatever it takes, even if we have to canoe it to the US,” Kenneth says.

“When he relapsed in 2015, he asked the same question and I told him that we’d have to go on an inflatable water bed. The third time around, in 2016, we tearfully decided that we would swim it. No matter what we did, we could not stand still. We had to move on.”

Jerome’s persistence shone through his ordeal, and he passed his driving licence and the post-secondary and first-year university exams by studying remotely from home.

The Frendos explain that no parent will ever accept the death of their children.

"Despite doing your best, you feel that you cannot forgive yourself. And once they pass away, the pain continues to grow," Josette says.

Before he died, Jerome asked his mother to support others in their same situation

"One year on, the gap that he left is bigger. We see other youths his age finding a job and settling down. While they are writing wedding invitations, we are writing memorial invitations."

Her husband adds: “It is not a matter of healing – it is a matter of adaptation – we learnt to live with it.”

No words, including ‘rest in peace’ bring comfort to them, but setting up the foundation Smiling with Jerome has in a way helped them keep the memory of their son alive.

Before he died, Jerome asked his mother to support others in their same situation, rather than return to work.

With the help of various sponsors, the foundation supports those who require financial help or those who need someone to talk to but do not know where to start. Among others it provides support to parents who lost their children – whether through miscarriage, stillbirth, sickness or an accident – also through psychologists and counsellors.

The foundation organises events free of charge, for patients and their families, providing some much-needed respite. Smiling with Jerome also supports families of children with various conditions or disabilities.

How did they come up with the name for the foundation?

Jerome had just died and with his body still in the hospital bed, the family started receiving messages from people whom they had never met. They all had one thing they remembered most vividly about the young man: his smile.

“With tears in our eyes, we decided there and then that we would kick off some initiative to extend his smiling legacy,” his father said.

The very first event of the initiative was a trip to Albania, where Kenneth’s uncle, Mgr Ġorġ Frendo, is based as Archbishop of Tirana.

The day following the funeral, Josette uploaded a Facebook post asking if anyone had any stationery items which they could take with them for those in need.

They received so many items – from new clothes and carpets to food – that they had to transport the whole lot in a 20-foot container. Luckily, the container, made it to Albania soon after the country had flooded, and the items providing relief to those who had lost everything.

The Smiling with Jerome foundation is calling for a young adults’ section at the oncology hospital. This is a common practice abroad, but in Malta once youths turn 16, they receive treatment with adults.

Jerome received his initial treatment at Sir Paul Boffa Hospital, surrounded by patients well in their 70s. This is not only difficult for parents, still coming to terms with their children’s diagnosis, but especially for the youths themselves, finding themselves surrounded by people who have lived much longer that they could hope for.

Look up the page Smiling with Jerome on Facebook or send an e-mail to smilingwithjerome@gmail.com for more information.