The Planning Authority has issued an order for the removal of yet another gate blocking a public pathway in the countryside, this time leading to Blata tal-Melħ, a scenic spot on Baħrija’s coastline, popular with hikers.

The gate, which was spotted by hikers last week, required a permit to be installed.

A spokesperson for the PA confirmed the structure had been put up illegally, adding that “the contravener has been instructed to remove the gate.

“Further action will be taken if such instructions are not complied with,” the spokesperson added.

There has been growing public attention lately to illegal gates blocking off access to public pathways. A recent example was a metal gate that had closed off access to the secluded beach of Fomm ir-Riħ, which sparked an outcry before it was removed.

The Ramblers Association first flagged the structure at Baħrija last Wednesday, saying that “someone simply placed a gate there and decided to close off access”.

“The passageway that the gate blocks leads to a scenic spot known as Blata tal-Melħ, a popular area with ramblers,” association president Ingram Bondin stated when reached for a comment.

“This passageway is also the main access point used by the general public to reach this place from a public road,” Bondin added. 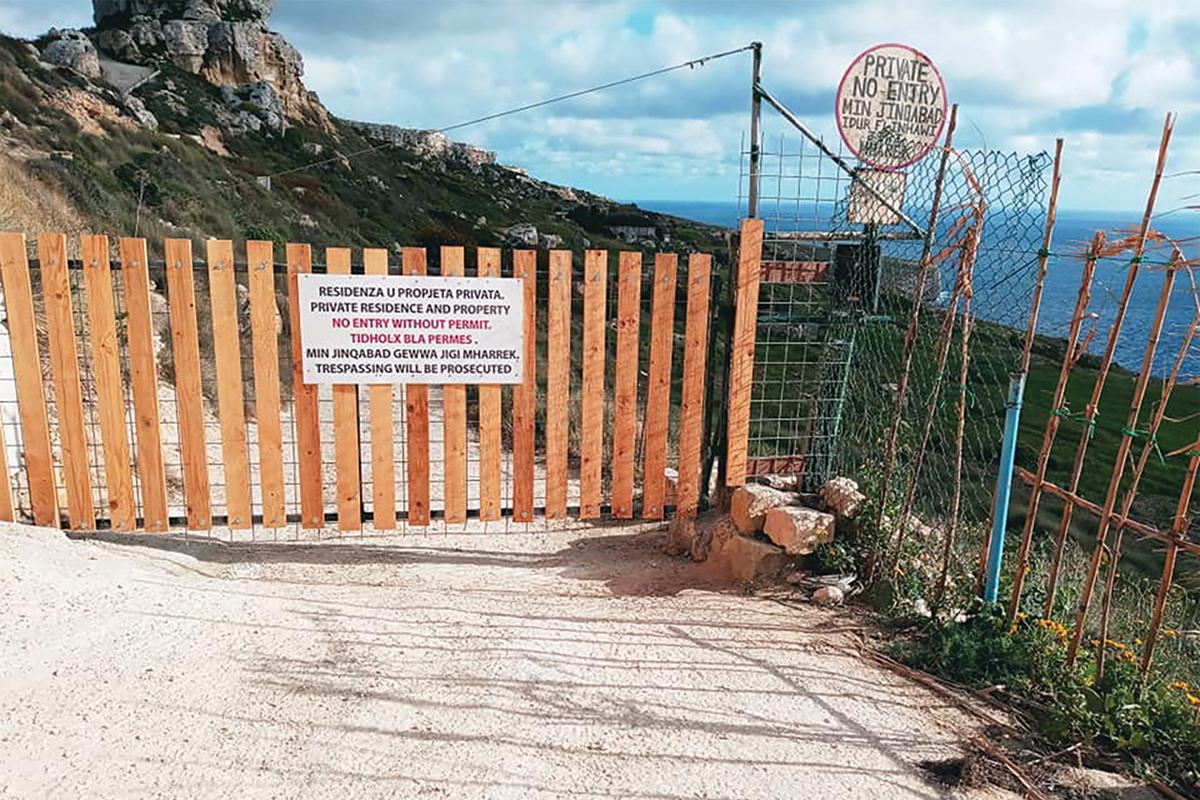 Blata tal-Melħ is considered a historically-important landmark due to salt pans in the area, its quaint natural beauty and a unique stairway leading into the sea that was once used by workers who would haul sacks of salt onto boats.

“The planning authority needs to protect public access to the open countryside and coastline. This is even mentioned as an objective in the highest planning instrument in the land, the strategic plan for environment and development (SPED),” Bondin said.

The gate, composed of a metal frame enforced with chicken wire and bamboo to prevent access from all sides, “is clearly illegal” as it does not comply with the requirements of the rural policy, Bondin added.

“Recently, timber strips were added to the contraption to give it the appearance of a legitimate gate as stipulated by the PA’s rural policy, which states that any similar gate would have to blend in with the aesthetics of the area.”

On Thursday, the NGO issued a public statement announcing their official request to the PA to remove the gate.

“If the gate comes back with a planning application, we will be there to contest it every step of the way,” the statement reads.

The original Facebook post that flagged the gate garnered attention, including from a person who claims to be one of the landowners in the area.

Contacted for comment yesterday, Paul Azzopardi said he wanted to meet next week to show all the damage done by trespassers.

In a public group administrated by Din l-Art Ħelwa, he said they “do not want people in our private land to spoil the surroundings, cause damage and make loud noise”.

In the Fomm ir-Riħ incident, the owner of the land was revealed to be the president of the Malta Developers’ Association, Sandro Chetcuti.

The environment ministry has said it is in negotiations with him but that the gate would eventually reappear if the owner decided to formally apply for it.

Chetcuti has said he wants to make sure the public has access to the beach but wants to reduce the possibility of injury as the path is in a dangerous state.