The Planning Authority has failed to explain the presence of heavy machinery and truckloads of construction material being deposited almost every day on a large tract of farmland on the outskirts of Nadur.

Times of Malta is informed that, for the last few weeks, a large area close to the scenic Kennuna Tower in Gozo has been invaded by construction workers, mostly migrants, building rubble walls and dividing the area into smaller patches.

Pictures show construction trucks owned by Gozitan construction magnate Joseph Portelli depositing rocks on the fields while heavy machinery, of the type used on construction sites, move soil and earth across the fields.

Asked what is going on and whether the works are being carried out under a planning permit, the Planning Authority has so far ignored the questions, despite several reminders over the past week. 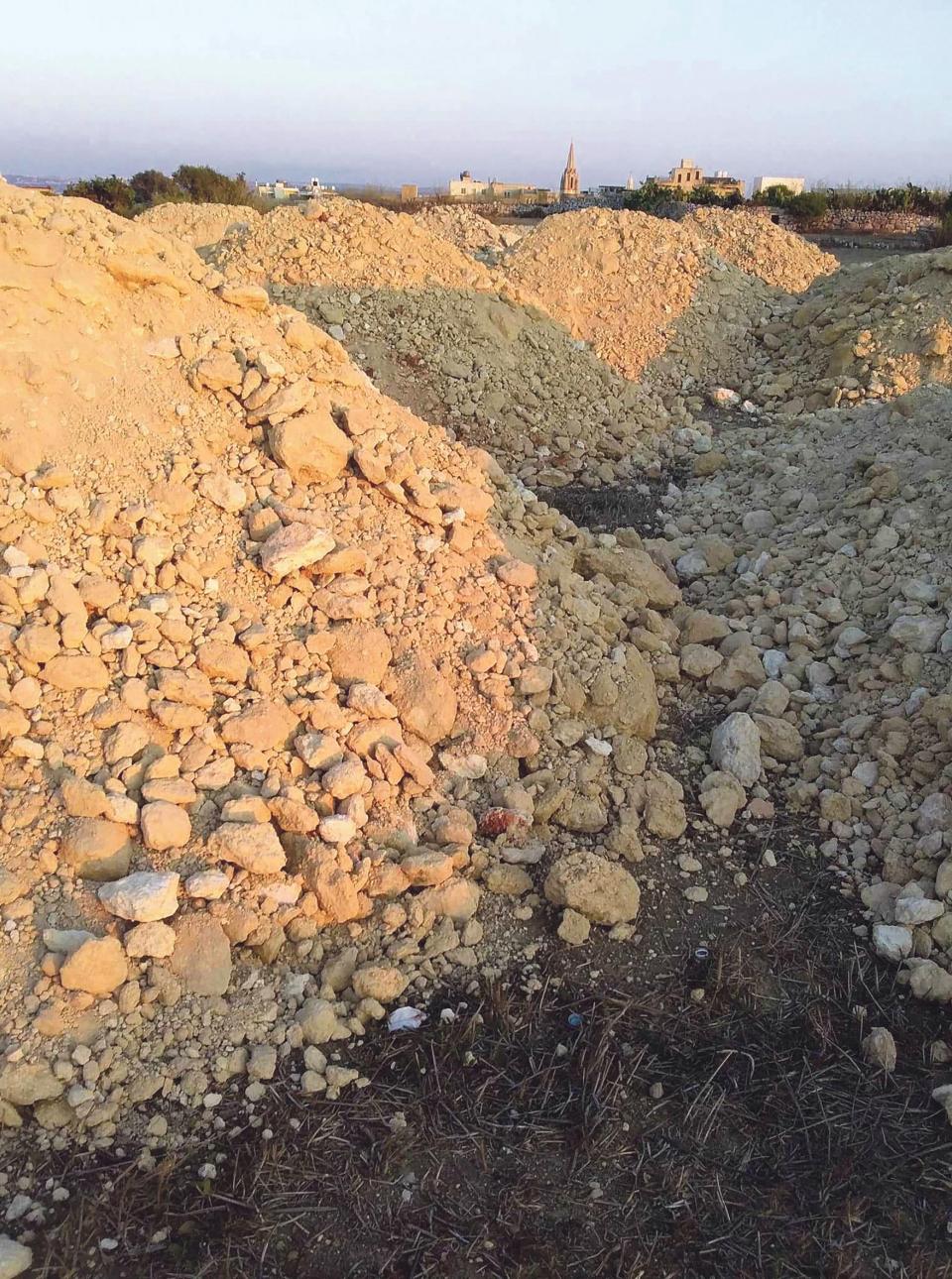 Research by Times of Malta shows that in 2018, Mr Portelli, of Joseph Portelli Projects, applied to repair and restore rubble walls in the area, which is the size of seven football pitches.

Declaring that he was the sole owner of the area, Mr Portelli withdrew his application just a month after filing it.

However, Mr Portelli’s children, Tristen and Chloe, filed identical applications, through architect Melanie Spiteri, for the restoration of dry rubble walls on the same plot, this time divided in two between them. Both also declared they are the sole owners of the massive plots of farmland.

The Planning Authority gave them a permit to carry out the work, through a Development Notification Order a few days after they filed their applications.

However, Nadur residents who contacted Times of Malta have described the intervention as “much more than just the restoration of rubble walls”.

A 65-year-old farmer said the area never had any rubble walls to begin with so he could not understand how the PA had issued a permit “to restore something that never existed”.

Other residents raised eyebrows over the fact that a leading developer like Mr Portelli was involved and expressed concern that the building of rubble walls could hold a surprise development down the line.

Joseph Portelli, a Canadian-born Gozitan, has become one of Malta’s most active construction businessmen over the past few years.

Now associated with the controversial Mercury Towers in Paceville, he is said to be involved in hundreds of construction projects that include turning old houses and dilapidated areas into apartment blocks.

In recent weeks, he hit the headlines because of the construction of an illegal concrete batching plant in a quarry in Kerċem, an application to turn a rural room on the outskirts of Qala into a sprawling villa and the proposed demolition of an old townhouse in Sannat to make way for a block of flats.

In May, Times of Malta reported that PA CEO Johann Buttigieg had recused himself from a vote on an application to build a new hotel in Mellieħa, citing a conflict of interest “in view of allegations made towards him by the applicant”.

Mr Portelli is one of the developers involved in that project, together with Mark Agius and Daniel Refalo.