The medieval cathedral of the Civitas, as the Mdina Citadel was known at the time, was damaged by the earthquake that devastated southeastern Sicily in 1693.

Although it is now thought that the damage was not severe enough to warrant complete demolition, the old cathedral was pulled down, the earthquake serving as a good excuse to have the cathedral rebuilt in the new Baroque style being adopted by the Knights of St John in Valletta.

Many artifacts from the pre-1693 cathedral survived the earthquake and were reused to decorate the new cathedral, while others are housed in the Mdina Cathedral Museum, including the magnificent St Paul Polyptych altarpiece and the recently restored Triptych of the Madonna del Soccorso by Antonio de Saliba. 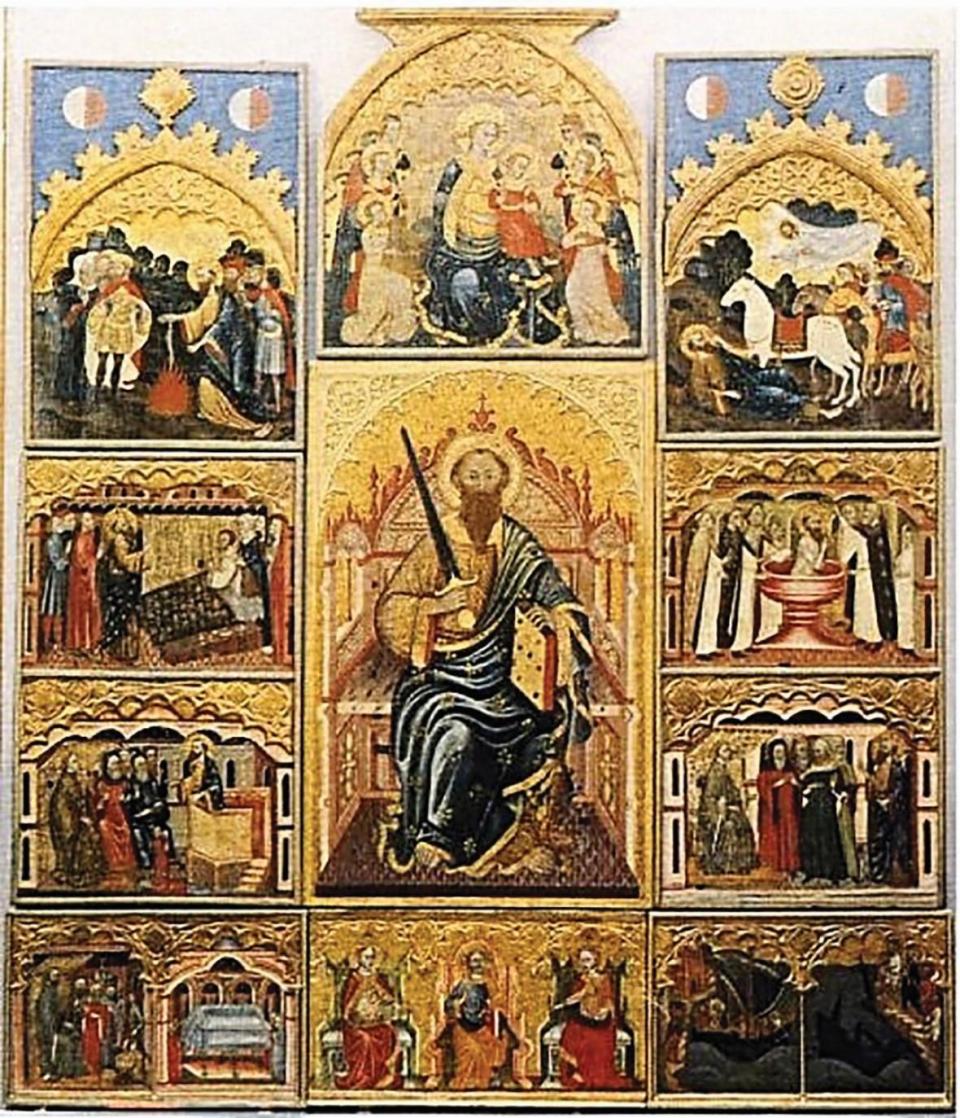 The design of the new cathedral was entrusted to Lorenzo Gafà, who had already been tasked with the design of a new choir prior to the earthquake. Work started in 1696 and the cathedral was consecrated by Bishop Cocco Palmieri on October 8, 1702; it was totally completed three years later when work on the dome was finished. For nearly a century, the interior decoration of Gafà’s masterpiece was held in abeyance until 1790 when the Palermitan artist Antonio Manno (1739-1810) was commissioned to paint the entire vault and the interior of the dome in the fresco technique.

Manno, together with his younger brothers Francesco, Vincenzo and Salvatore, ran a flourishing bottega in Sicily. The vault frescos consisted of a cycle depicting episodes from the life of St Paul; the dome fresco, representing a Paradiso or ‘Glory of Saints in Heaven’, was completed in 1794 by Francesco, based on preparatory sketches by Antonio. The bozzetti of the dome fresco, extant at the Mdina Cathedral Museum, show that the Paradiso included the Holy Trinity accompanied by the Blessed Virgin, sainted bishops, apostles and angels, as well as founders of religious orders, St John the Baptist, female saints and angels.

In spite of several vicissitudes, including water infiltration, lightning strikes and a minor earthquake in 1846, this Paradiso was to continue adorning the inside of the cathedral dome until 1856 when two strong tremors shook the island, causing considerable damage to property but fortunately no deaths. The Mdina Cathedral was one of the several churches that were badly damaged. The Procurator, Canon Pietro Xerri, immediately engaged an architect and a master mason to assess the damage and recommend what measures were necessary to effect the necessary repairs.

In their report, they advised that the dome required partial demolition and rebuilding. This drastic recommendation was not well received by the Cathedral Chapter, who sought a second opinion from the architects Giuseppe Bonavia and Paolo Attard, assisted by two master masons. This latter consultation was instrumental in saving Lorenzo Gafà’s cupola, which was later successfully repaired under the direction of Bonavia himself. Manno’s Paradiso, however, was damaged beyond restoration. 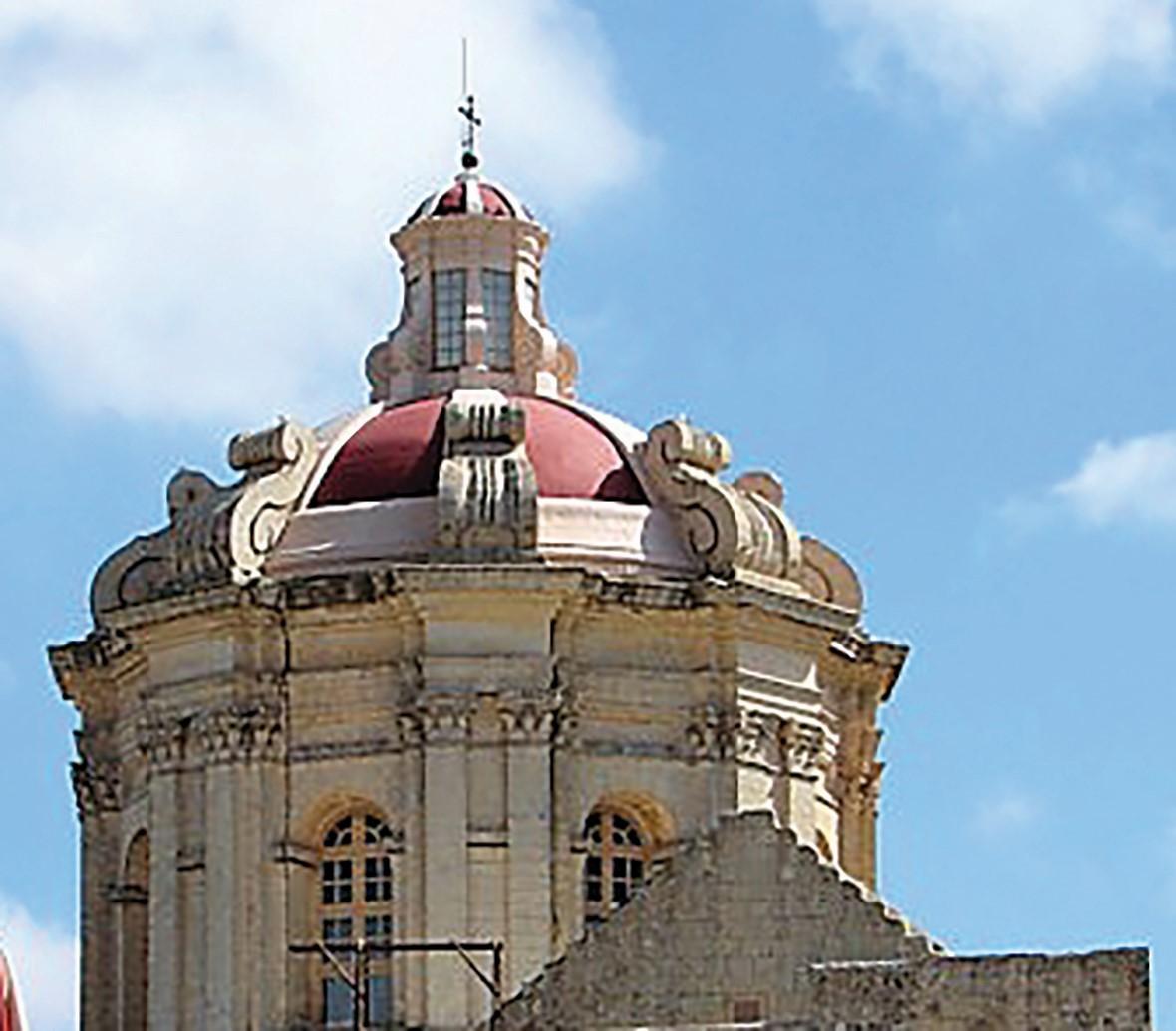 It was proposed by Canon Giuseppe Bellanti that it should be replaced by simple and plain decoration so as to prevent future regrets over the destruction of an important work of art.

Rev. Francesco Schembri, another member of the Cathedral Chapter, however, disagreed. He opined that the cathedral deserved a more grandiose project which would uphold its dignity, namely another fresco in the style of the rest of the vault paintings. Eventually, after much debate, the chapter appointed a committee of four canons to consider the matter in consultation with the renowned Nazarene artist Giuseppe Hyzler. 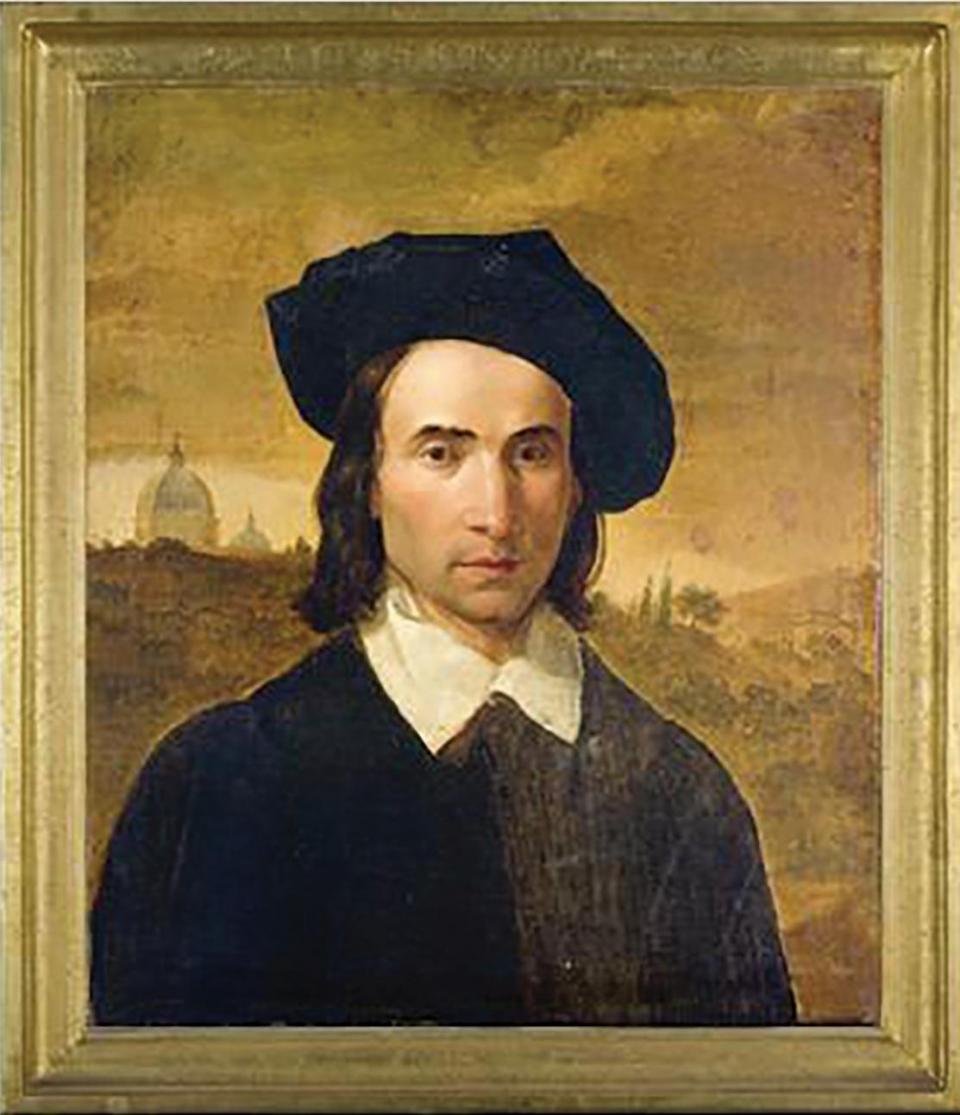 A self-portrait of the Maltese Nazarene artist Giuseppe Hyzler who was consulted on the repainting of the dome interior, but who died before he could tender his advice.

The chosen four were reverends Emanuele Rossignaud, Francesco Schembri, Michelangelo dei Baroni Galea and Pietro Xerri. During their deliberations, Hyzler passed away, and it was therefore necessary to find another qualified consultant. They advised that it was impossible to find such a person locally, since Maltese artists were not conversant with the fresco technique, and it was decided to appoint an Italian artist.

While preparations were being made to contact a Roman artist, an Italian painter resident in Malta, Giovanni Gallucci, offered his services, an offer that was gladly accepted, but which was to lead to much disagreement within the Cathedral Chapter.

Gallucci was born in Ancona in 1815; like several other artists then active in Malta, he was a pupil of Tommaso Minardi, then considered the most influential painter in Rome. He arrived in Malta via Tripoli in the late 1840s and established a studio in Valletta.

After inspecting the remains of the Paradiso, Galluci proposed that it be repainted, either according to Manno’s original or as a completely new composition which he was ready to undertake. He further undertook to execute a number of samples on stone slabs for testing by a competent arbiter, who was duly selected in the person of Tommaso Minardi.

Before these samples could be dispatched to Rome, however, canons Rossignaud and Galea informed the chapter that they had already consulted Minardi, and the latter had rather arrogantly declared that no painter who had not been to Rome could possibly be a competent fresco painter. Frustrated by this turn of events, Rossignaud resigned from the dome committee and Canon Paolino Ellul took his place. The chapter, at its congregation of January 26, 1859, came up with the unexpected suggestion to forget having the dome interior painted in fresco, and instead have it painted in oils, completely disregarding Gallucci’s proposal.

A visiting artist, Nicola Consoni, who was in Malta to survey the Preti vault paintings in the Conventual Church of St John, was roped in to give his opinion. Consoni was a pupil of Minardi, and he unsurprisingly proposed a fresco, but unlike Minardi, he stated that anybody could carry out the commission as long as Manno’s bozzetti would be followed.

Local artists were by this time beginning to take an interest in this affair. Three Maltese painters, Paolo Cuschieri, Giuseppe Bonnici and Antonio Falzon, together with the aforementioned Gallucci, decided to enter the fray, requesting that they be considered for the dome decoration in separate petitions to the Bishop of Malta, Gaetano Pace Forno, who duly forwarded them to the Cathedral Chapter.

All four were very eager to secure this important commission, as evidenced by the contents of their letters to the bishop. Except for Bonnici, whose missive was short and unpretentious, the other three dwelt at length on their training and achievements. Cuschieri mentioned that he was a pupil of Tommaso Minardi, and enclosed a letter of recommendation by the Roman artist, who intimated that he was ready to teach Cuschieri the fresco technique and assist him in the preparatory work.

Apart from Minardi, Cuschieri also had a local champion, Canon Francesco Schembri, who was known to have a marked desire that the dome should be decorated by a Maltese artist.

Antonio Falzon offered to undertake the commission using oils rather than fresco, adopting a method that would ensure compatibility with the rest of Manno’s vault frescoes.

In his short letter, Bonnici also mentioned his training by Minardi and declared that he was ready to carry out the decoration in either oils or the fresco technique. 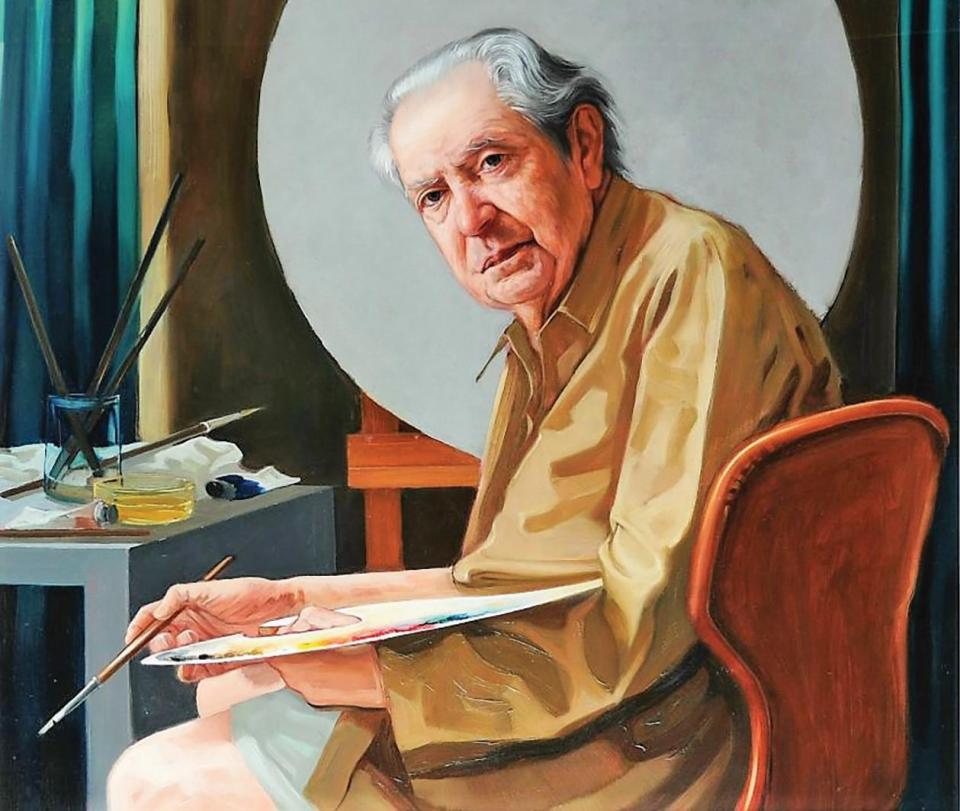 A portrait of Mario Caffaro Rore by his pupil Gianni Pelassa. Caffaro Rore was commissioned by Archbishop Michael Gonzi to paint the cathedral dome interior in 1954.

Gallucci’s letter differed from the other three in that he dwelt at length on his dealings with the Cathedral Chapter, complaining to Bishop Pace Forno about his treatment by the canons and about the decision to have the dome painted in oils. Although he suggested a competition in which the contenders would reproduce to scale a small part of Manno’s bozzetto, he also pleaded with the bishop to grant him the commission directly. His entreaties were successful, for on September 7, 1859, Pace Forno wrote to the Cathedral Chapter, directing them to award the contract to Gallucci for the decoration of the dome interior fresco following Manno’s bozzetto. Remuneration was to amount to 3,000 Maltese scudi in monthly payments of 50 scudi, starting from the signing of the contract. Gallucci was bound to finish the job in one year.

Canon Schembri, however, was not prepared to take this lying down, and he declared that, in spite of his previous opinion, he now preferred oils as a medium, and he considered fresco unsuitable, dangerous and costly. The bishop, however, proceeded to endorse the contract on October 8, 1859, and Gallucci started work immediately, completing the fresco in seven months on May 16, 1860. The finished work was received with mild enthusiasm by the local population, with little or no comment in the press. Nevertheless, Gallucci continued to pursue a lucrative career in Malta.

By 1885, Gallucci’s dome paintings were already showing signs of deterioration, and Giuseppe Calì, who had assisted Gallucci in 1860, was asked to effect some restoration. Fast forward to 1926, and the dome was again in danger: Prof. R.V. Galea inspected the cupola and concluded that it should be demolished and rebuilt.

In a repetition of the mid-19th century controversy, the future of the dome’s decoration became the subject of protracted negotiations with several Italian artists

In a ‘history repeats itself’ moment, the Cathedral Chapter did not accept this and appointed two other architects, Emanuel Borg and Gustavo Soler, to give a second opinion. They duly contradicted Galea and recommended repairs which, however, would mean the destruction of the fresco. Heated arguments followed, but the chapter eventually voted in favour of repairs. And that was the last of Gallucci’s dome decoration.

In a repetition of the mid-19th century controversy, the future of the dome’s decoration became the subject of protracted negotiations with several Italian artists, including Achille Casanova. The haggling continued for years until 1938 when Casanova was metaphorically shown the door, the chapter asking him for a final invoice covering his preparatory sketches. 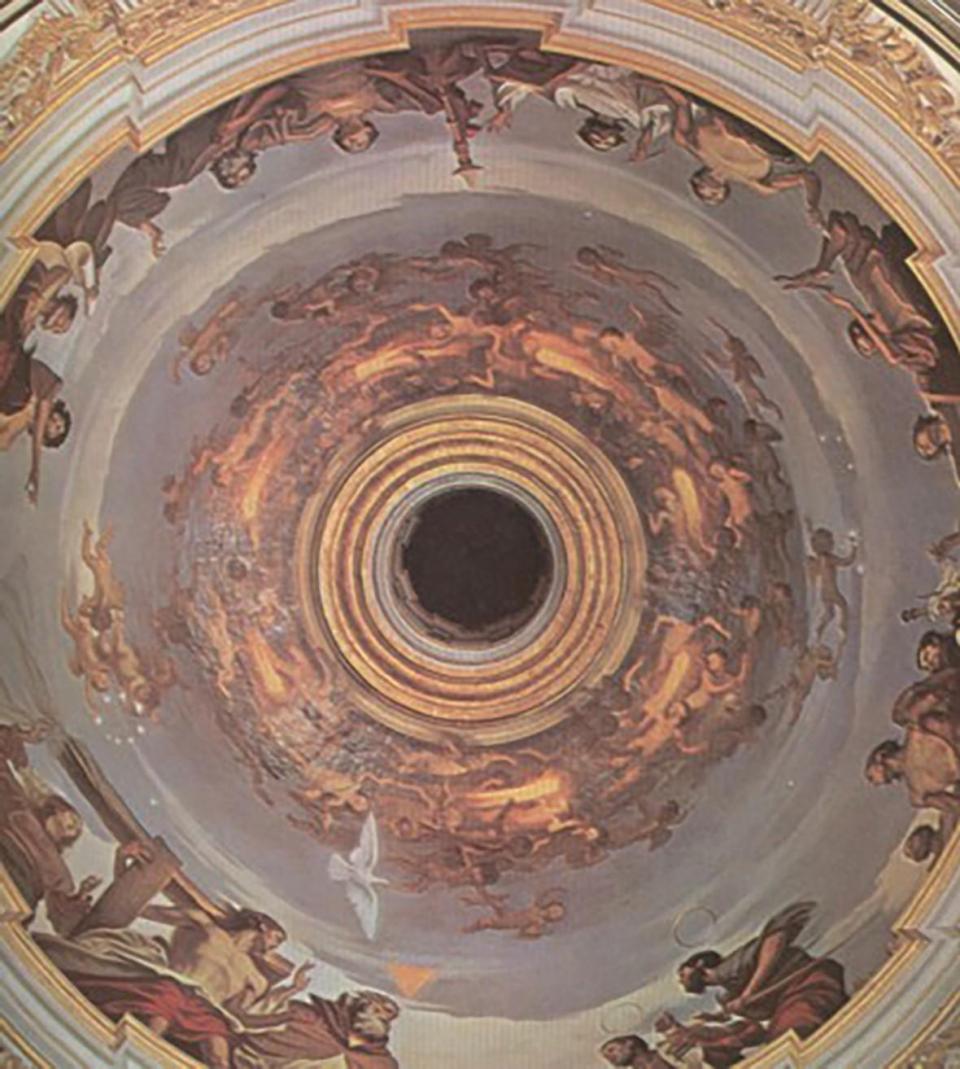 The interior of the Mdina Cathedral dome as painted by Mario Caffaro Rore in 1955 and considered to be his greatest work. (Paradiso, olio su intonaco)

World War II then interrupted any further attempts, and it was only in 1955 that the dome’s interior was repainted. It was another Italian artist, Mario Caffaro Rore, who was asked to undertake the job by Archbishop Michael Gonzi. Caffaro Rore accepted, and completed the work in eight months. During his stay in Malta, Caffaro Rore executed many other ecclesiastical works, notably a cycle of oil paintings on the Life of the Virgin at Stella Maris parish church in Sliema. The subject of the dome painting was again a ‘Glory of Saints in Heaven’, or Paradiso; this time the medium was oils on canvas pasted to the masonry of the cupola, described by the painter’s daughter Adriana as olio su intonaco. The work was hailed as Caffaro Rore’s greatest opus.

Thanks to Dr Charlene Vella who kindly read the first draft of this article and made many valuable suggestions. The article is based on the extensive paper by Antonio Espinosa Enriquez in Proceedings of History Week, 1986, published by the Malta Historical Society.