A parcel deliver scam has taken on a new twist with scammers sending out personalised messages to their potential victims.

One reader sent a screenshot of a purported message from DHL, in which the scammers addressed her by name in a bid to solicit payment for a phantom parcel delivery.

Over the past month, police have been receiving up to 20 reports a day from victims of convincing emails and text messages about parcel deliveries that are actually scams to defraud people of up to €5,000.

The initial parcel delivery scam has been around since April but intensified in recent weeks with messages being sent in Maltese and English and purporting to come from a range of delivery groups including MaltaPost and DHL.

The new scam now being reported also contains the name of the intended victim, in a bid to make the messages more convincing. 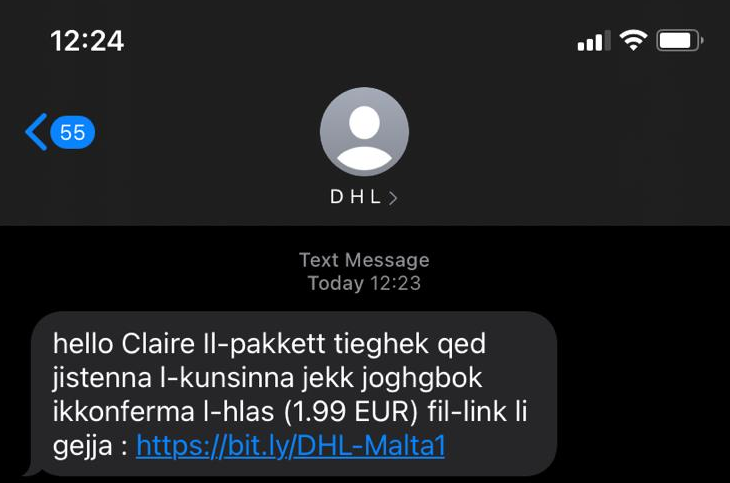 Warnings have also been issued about another scam whereby the caller claims to be a member of the police.

Over the past month, several people have reported receiving calls with a recorded message in English telling them about suspicious activity related to their e-ID account, or that an arrest warrant in their name had been issued.

They are then referred to a number and asked to supply personal information.
One reader on Tuesday received four such calls in the space of 40 minutes, from different numbers.

It was also revealed in May that several people had fallen victim to another scam where they received a text message that appeared to be from MaltaPost asking them to click a link to arrange for a parcel delivery and asking for the payment of a fee.

MaltaPost had issued two warnings about the scam. The police had received more than 200 reports and more than €100,000 were believed to have been stolen in this way.

The year of the scam

In March, GO reported that scammers are using technology that allows them to display a legitimate number on people’s phones.

The scam, known as ‘number spoofing’, means the actual number is masked by a fake one on the caller ID display, leading the customer to believe that the call is from a trusted source.

Claiming to be GO representatives, the scammers then ask receivers to download software or provide personal, banking or PIN details, information that the company never asks for over the phone.

Back in February, the Central Bank of Malta has warned the public to be on guard saying it has received several reports from residents who received scam calls via Viber.

It said that the caller profile shows up as the "Central Bank of Malta" and even includes a photo of the bank’s premises – even though the number is not linked at all with CBM, may not appear, or may be a foreign number.

The recipient is told that their “account number or other personal information are needed” to solve some problem – in particular linked to a threat to block credit cards.