When, aged 67, Anthony Agius discovered he had Parkinson’s, his initial reaction was fear that the life he led and loved was over.

Now, two years down the line, Mr Agius has discovered a new lease of life, made new friends and regularly attends dance therapy classes with his wife. 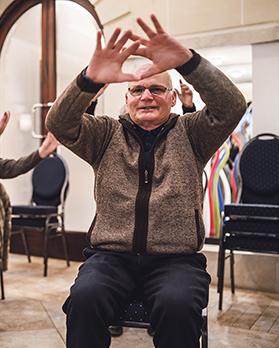 He attributes this newly-found optimism and energy to Step Up For Parkinson’s, a voluntary organisation set up with the intention of improving the quality of life for people with the disease and their carer through what they refer to as “creative movement classes”.

“Since my daughter discovered the association through social media, I have become a regular at these classes, which are held weekly,” Mr Agius said, adding he noticed an improvement in his movement and coordination.

The condition is, in fact, characterised by stiffness of muscles, tremors and speech difficulties.

Admitting that, upon first discovering he had the disease, he was not well-equipped to face his new reality, he recounted how, since becoming involved with StepUp for Parkinson’s, there appeared a silver lining.

“Dance therapy has increased my fitness levels and made me more energetic. I am also glad these initiatives have helped raise more awareness about the condition,” he said.

He added how, finding support from others who had the same condition as his was also a game-changer, inspiring him to learn more about the condition and how other people coped with it.

When I was first diagnosed, everything was difficult

“There is no shame in asking for help. When I was first diagnosed, everything was difficult. I even needed help getting dressed everyday. Today, I have learnt to live with it, thanks to the support of my family and Step Up for Parkinson’s,” Mr Agius said.

He stressed the importance of asking for help within the community, especially through organisations and speaking to others who also had the condition.

The dance movement classes have turned out to be highly popular, so much so that a new series is set to kick off soon at the primary school in Mellieħa, the senior citizens premises in Floriana and St Antide primary school in Gudja.

All classes are free of charge and led by two qualified instructors.

The organisation will also be hosting a teacher training course for those who have a background in dance and would like to work with those who suffer from Parkinson’s, rheumatism, Alzheimer’s and dementia.

Details on classes and courses are available at http://stepupforparkinsons.com/classes