Watching Promesas by Alegria Flamenco was a great pleasure. It provided a much-needed deviation from local current affairs and the materialistic impulses associated with the festive season.

Having been welcomed in the foyer with a typical Andalucian sherry tasting and a colourful display of art by the talented Josette Fenech for the appeal for Organ Donation, I knew I was in for an eventful evening.

The show kicked off with a simple yet striking setting: two groups of four women sitting on a bench with their back to the audience facing a projection of a medieval stained glass window. This immediately provided the context for Maria (played by Justine Lanzon, whose enticing presence was constant throughout the show) and her reality. The sound of sombre bells was immediately contrasted with the fun ‘alegrias’ in the tavern. Maria could be seen carefully listening and longing to join the merry-making at the neighbouring tablao from her convent room.

The narration, (which helped audiences understand the story) that followed confirmed the setting of the plot, based on S.W. Aguis’s short story Sovilgliana from 1932.

Maria’s internal conflicts were brought to life with the powerful ‘Cana’ where dancers representing nuns portrayed a ferocious boldness of percussive footwork. The crescendo of this piece came to a captivating end with the choreographic use of the sign of the cross. 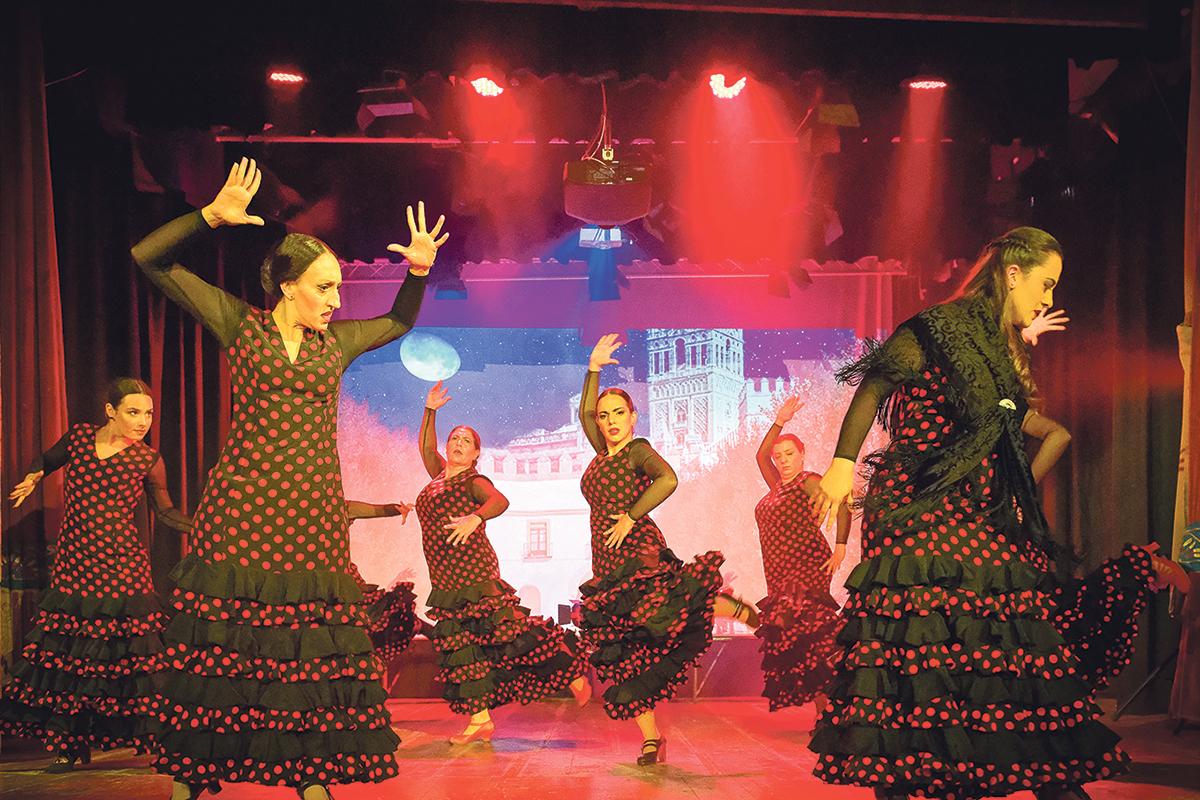 An intense, powerful and precise performance of high-voltage dancing

Meanwhile, Maria’s in­tense angst was mirrored by the ensemble’s rhythmic phrases and the strict vertical corkscrewing tension of their upper bodies as they represented the police force. The combination of the tailored uniform jackets with the frills of the flamenco skirts was an interesting combination and was just one example of the fine tailoring of all costumes throughout the show.

Shortly after parents’ mobile phones were set to record their daughters’ or granddaughters’ short, sweet and bold appearances, mischievous Juan, played by Anthony Tomaselli, showed off his poise. The teens were next, where the interesting choreography and playfulness masked the self-consciousness of some of the performers who could not resist biting their lip while ensuring that they gave a good performance.

Sarah Spiteri and her violin accompanied Maria’s encounter with fun-loving Juan ‒ a welcome contrast to the strong flamenco music feel. The first act came to an end with an intense, powerful and precise performance of high-voltage dancing with a spiralling crescendo that conveyed Lola’s anger, jealousy and thirst for revenge. It was a pleasure to have live flamenco guitar from Alejandro de Chacon and flamenco singing from Mara Delgado. 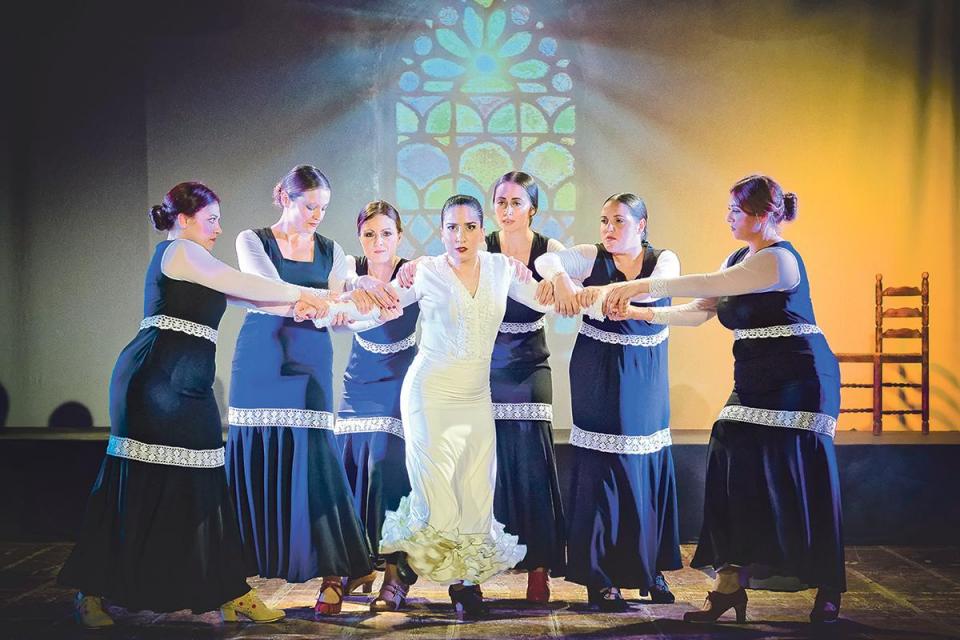 The thick white rope, used to portray the frictions between ex-lovers Juan and Lola (played by the strong Marina Joy Azzopardi) could have been used to create a more dynamic duet. What followed was an interplay between foreground and background. Maria, under crisp white light at the back of the stage took the foreground, while Lola, at the front, was dimly lit to create a special emotional dimension.

The stunning effects of contrast from a single, gliding legato, apparently suspending time, with a robust but playful intensity, was accompanied by the touching voice of Delgado and by the strumming of de Chacon’s able fingers. Maria’s conscience in the next piece allowed the audience to assume that the three women represented Maria’s past, present and future. On the other hand, Maria’s stillness spoke a thousand emotions.

Finally, Lola surrendered and presented the love of her life to Maria, creating a visually dynamic verve. Although happy, Maria did not shy away from portraying her fears. The show came to an uplifting end with a fiesta full of cheerful “óles!”

Promesas not only showcased brio, sensuality and technical mastery, but also gave the opportunity to youngsters to experience the stage and hopefully enticed them to strive for technical brilliance. Choreography by Estelle Bonello Sant, Ema Marie Attard, AnnaMaria Espinosa Rodriguez and Nicola Henson was impeccable and clever, especially considering it was all original.

Ingrid Sciberras’s passion and drive, which has led Alegria Academia and Algeria Dance Company for the last 10 years, was transmitted from every performer to the audience through the tasteful production and organisation of the whole event.

It also inspired confidence that in years to come, flamenco in Malta will continue to grow, and in Sciberras’s words, may it continue to provide a “safe haven [for participants: whether amateurs or semi-professionals] to release emotions […] of sadness and happiness that can be transformed and released through the beautiful art of flamenco”. 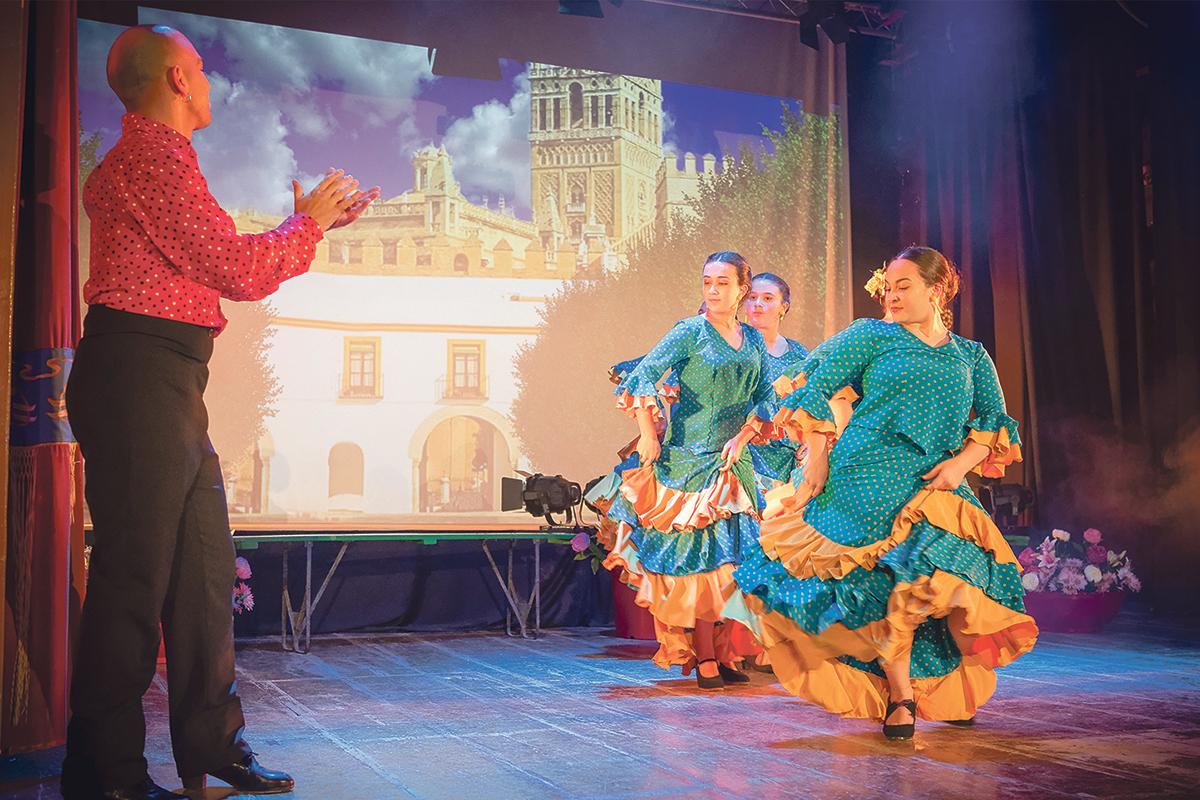