Maltese agents for the controversial passports-for-cash scheme have been filmed boasting of their warm relationship with senior government ministers, in a French news programme which branded Malta “corruption paradise”.

In an episode of Enquête Exclusive (Exclusive Inquiry), a Maltese agent of the Individual Investor Programme describes his friendship with both Prime Minister Joseph Muscat and Parliamentary Secretary for Citizenship Julia Farrugia.

The programme was aired on Sunday evening.

In the exposé, the journalist for French TV channel M6 poses as a representative of African clients seeking a Maltese passport.

The agent from the law firm Chetcuti Cauchi Advocates was pitching his services to sell Maltese passports to potential wealthy African clients.

He said that Julia Farrugia, the parliamentary secretary currently in charge of the programme, was "a childhood friend of my wife". He added: "It's good to have a wife with such friends ..."

On Dr Muscat, the agent boasted of how they were at school together.

"We were invited to our respective birthdays," he said.

He also named Justice Minister Owen Bonnici as someone they know, adding that he had even worked at their law firm at one time.

Identities of the Maltese agents are not revealed and their faces are blurred in the programme.

“As a law firm, we benefit from professional secrecy, so everything your clients say will be kept confidential…And we are one of the only passport agencies with a 100 per cent success rate,” one of the agents says.

The secret of this success is an intimate knowledge of the selection criteria, “and the best ways to get around them”, he says.

In another scene at the law firm’s head office, another agent jokes about the room being the setting for “passport parties” when clients are successfully approved by the authorities.

The lawyer also claims to be able to get a second chance for passport buyers that have been turned down, adding that this was possible when ministers “turn a blind eye”.

The news programme says that all the ministers involved were later contacted for a comment and all of them said they had never intervened in any applications. The law firm in question has also denied trading in influence. 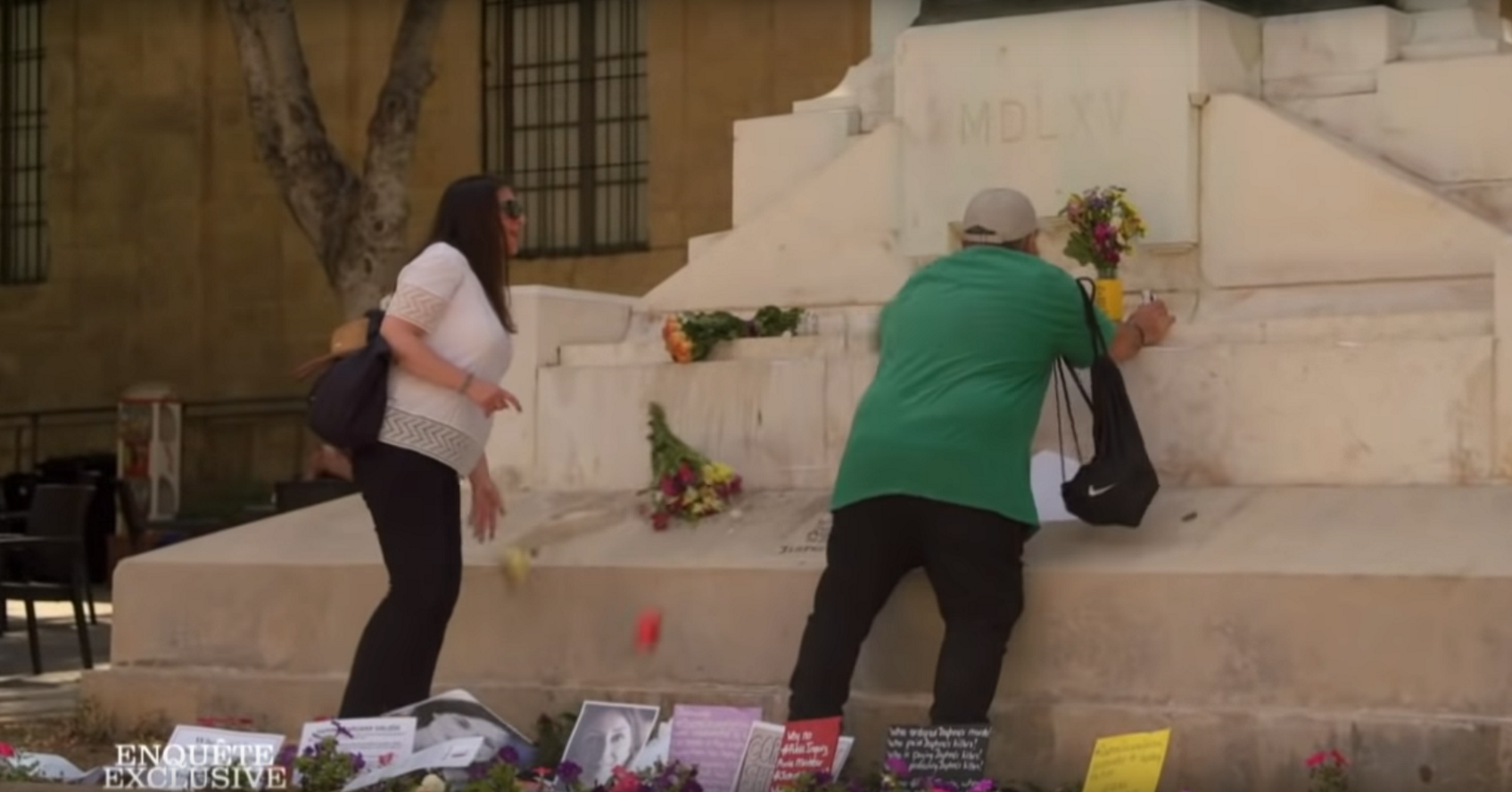 A man is filmed violently destroying a memorial to Daphne Caruana Galizia as her sister looks on in disbelief.

The hour-long episode also shines a spotlight on the trials and tribulations of the family of murdered journalist Daphne Caruana Galizia as they campaign for justice.

In one dramatic scene, the TV crew record the memorial to Ms Caruana Galizia being destroyed in broad daylight as has been happening on a regular basis just across the street from the Valletta courthouse.

Although the murdered journalist's sisters and other horrified on-lookers try to put the flowers and candles back, they are quickly cleared away again by the men who shout at the film crew.

And, in another segment of the episode, the son of the late Paceville entrepreneur Hugo Chetcuti, Luke, is also caught boasting of how he urged a government minister to intervene after one of his competitors got a beach-front concession.

While being filmed discreetly by the film crew the 26-year-old can be heard talking to a third party and complaining about a competitor’s beach concession on St George’s Beach.

“Last week I was having dinner with Chris (Cardona), the minister for the economy…
And he texted the tourism minister (Konrad Mizzi) saying: we must help the Chetcuti family. They have always helped us. The other minister replied saying the beach was quite small but he would see what he would do, if it could be enlarged,” Mr Chetucti is heard saying. 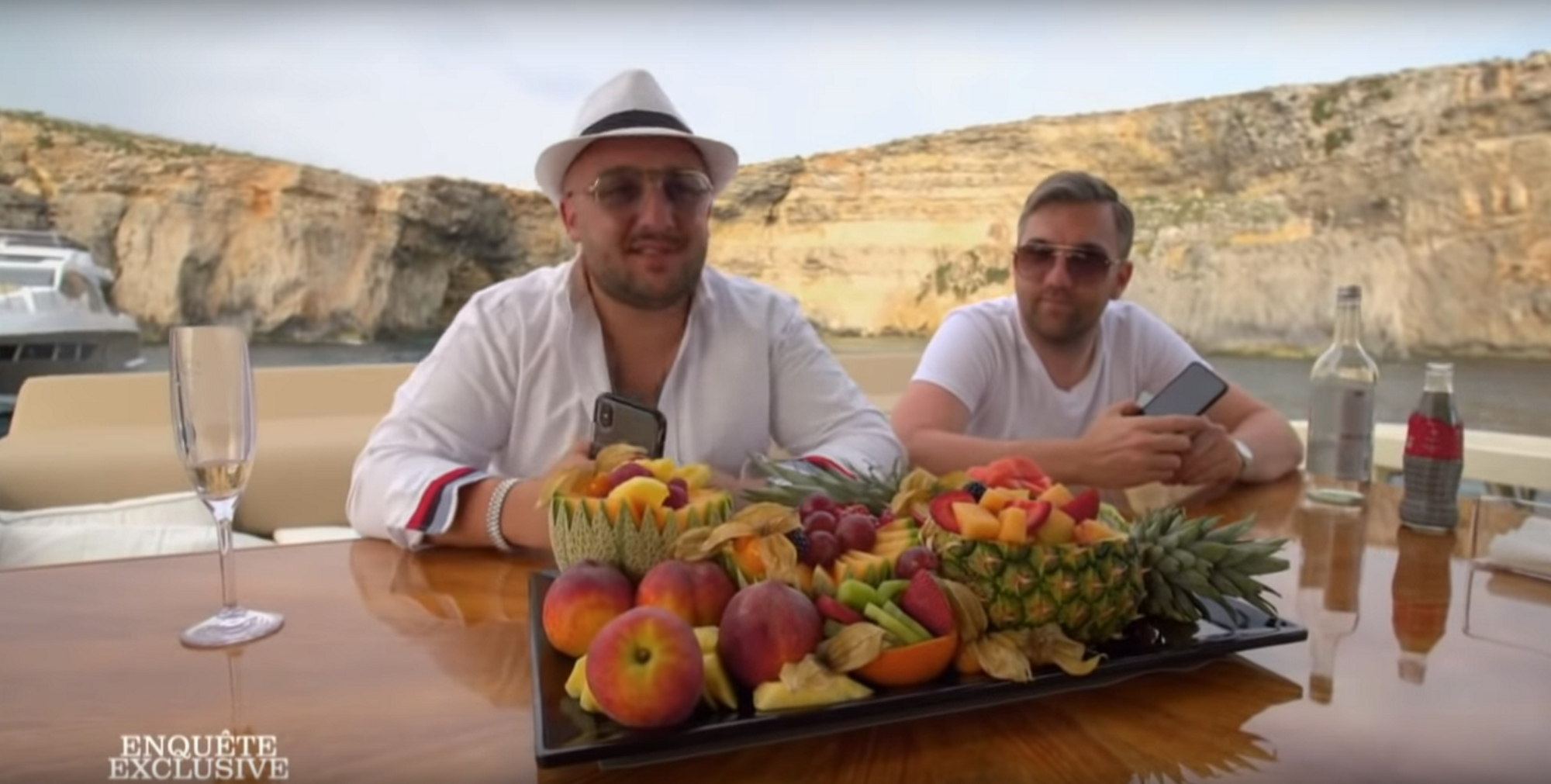 Luke Chetcuti on board a luxury yacht.

Contacted by the programme, Mr Chetcuti said the footage had been taken out of context.

On board his yacht, Mr Chetcuti brags of owning luxury cars and talks about his lifestyle at the helm of a business empire.

Mr Chetcuti took over his father’s Paceville business empire after he was murdered last year.

In its reaction, the government refuted claims that “eyes are closed” at any stage of the IIP process.

It confirmed that the Malta Individual Investor Programme Agency (MIIPA) had suspended the agent licenses of the law firm mentioned by the French TV programme M6 “given the dissemination of misleading information”.

The government said politicians could not interfere with the IIP process, which had a transparent audit trail and thorough due diligence system.

"Any impression that any agent enjoys a special treatment is completely misleading, it added."

Justice Minister Owen Bonnici had never been employed with or been associated with the firm, the government said.

Parliamentary secretary Julia Farrugia Portelli knew a partner of the firm when she was 10-year-old child, and Prime Minister Joseph Muscat's acquaintance also dated back to his childhood.

The government said French journalists requested an interview with Maltese government officials last month, claiming that a partner in a law firm had made claims of association with members of government.

During the 16-minute interview, Parliamentary Secretary Farrugia Portelli was not asked any question about this allegation.

With regard to claims about alleged misconduct by the Economy Ministry, it said Economy Minister Chris Cardona had countless meetings with potential investors, established enterprises and all relevant stakeholders.

It also said that the claim of political influence relating to a beach concession at St George’s Bay was totally unfounded since the Tourism Ministry did not award land concessions. The existing concession was awarded by a previous administration, it said, as it welcomed any investigations by Commissioner for Standards in Public Life on any of these claims.