All producers working on current affairs shows airing on the national broadcaster's channels are to "obtain approval from the PBS management" before moving forward with topics for programmes, according to a memo sent by chairman Mark Sammut.

Seen by Times of Malta and dated October 4, the memo was sent by Sammut to all producers, informing them that "with immediate effect" they must inform PBS management of what is to be discussed on the programmes.

"In this regards, the management needs to be informed 15 days in advance with the topics which are going to be discussed in their respective programmes and relative guests. 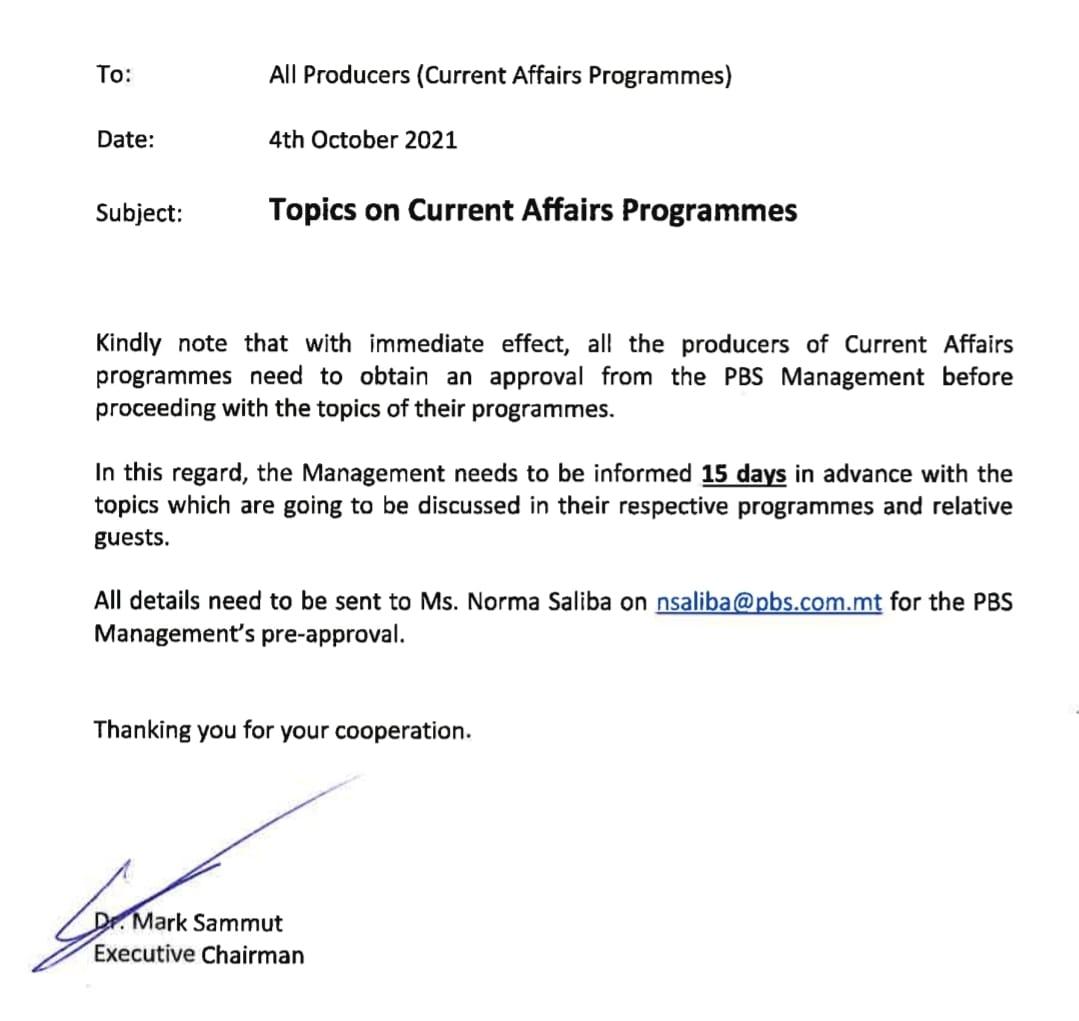 The memo sent to all producers.

"All details need to be sent to Ms Norma Saliba on nsaliba@pbs.com.mt for the PBS management's pre-approval," the memo reads. Saliba is TVM's head of news.

Sources told Times of Malta that previously, producers of current affairs programmes had to inform PBS of topic subjects a few days ahead of broadcast.

Those rules started being tightened last year, after Saliba was made head of news, sources said, when PBS started telling producers that topics had to be pre-approved.

The leaked memo published on Tuesday formalises that requirement, while including a 15-day minimum notification period.

Requiring topics to be pre-approved by management opens up the public broadcaster to accusations of censorship, while the requirement to submit topics 15 days ahead of broadcast makes it impossible for shows to focus on breaking or topical news issues.

Sammut, however, insisted to Times of Malta that the memo was only sent out so topics can be included "in our schedule" and to providers of "EPC [electronic program guide] TV guides".

"Topics would be obviously subject to change," he said.

The memo was sent out on the same day that the minister responsible for state broadcasting, Carmelo Abela, slammed Opposition leader Bernard Grech’s claims that the public broadcaster is under control by the Labour Party and government.

In a recent interview with Times of Malta, Grech said that the party’s message was not reaching people because PBS has been ‘captured’ by the Labour Party and Castille.

The PN has for months argued that under a Labour government, a career in public broadcasting was the prerogative of people at Castille, who directly chose who could join PBS, securing its grasp on all the information issued by the newsroom.

Upon taking office in January 2020, Prime Minister Robert Abela had pledged he would reform the national broadcaster.

Since then, however, popular shows like the long-running Xarabank were taken off the air and several journalists left the newsroom.

In August, it also emerged that journalists who work for TVM are allowed to do little “proper” journalism and are discouraged from pursuing stories that could potentially embarrass the government.

Meanwhile, on Tuesday, PN deputy leader David Agius said that since flagging the issue of imbalance that favours the government, the national television station continued to give more coverage to the Labour Party in comparison to the PN.

He once again appealed for the Broadcasting Authority to carry out its responsibility to ensure impartiality in public broadcasting and called on PBS to give more balanced coverage of the news.

The party said that in three days last week, between 40-50 per cent of the evening news was dedicated to government proposals while the most space given to the PN was 11 per cent.