John Zammit, 66, had a pleasant surprise last August when his bank account was credited with almost €3,700 in pension arrears.

The deposit and subsequent letter from the Social Services Department informing him of a higher weekly pension rate signalled the end of a six-year battle against injustice.

Mr Zammit’s story featured in the Times of Malta last year. The story recounted how a decision to become self-employed after taking early retirement from HSBC bank in 2001 had penalised him upon his  retirement 10 years later.

His pension was worked out based on the last 10 years of his self-employed working life, which gave him a pension that was almost half what it would have been had he simply sat out the period to retirement age.

READ: 'I would have been better off if I stayed home and did nothing'

Mr Zammit had made 32 years of national insurance contributions before retiring from the bank, where he had worked as a security manager.

The important thing is the injustice has been fixed

“This was more than enough, but these contributions were ignored. It was an injustice, because people like me who opted to continue working rather than depend on government handouts until retirement had to contend with a lower pension,” he said.

The injustice was finally fixed in the last Budget. He got assurances from Mark Musù, the permanent secretary at the Social Solidarity Ministry, that the situation would be rectified. 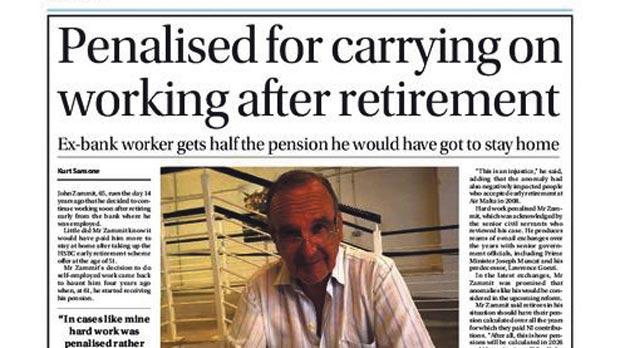 Months rolled by, until finally, on August 27, Mr Zammit’s bank account was credited with the arrears covering the period between January and September of this year.

His pension rate was adjusted – backdated to January 2016 – to a new, higher rate in line with his earnings and contributions before he was self-employed. From October, the monthly pension deposit will reflect the new rate.

Mr Zammit now receives €230 per week, a substantial difference from the €133 he was receiving before the change.

“I was cheated out of €30,000 over the past six years, but the important thing is the injustice has been fixed and it is a relief,” he said.

The legal changes to rectify the situation had a positive impact on around 300 other people, who faced situations similar to Mr Zammit’s, according to Mr Musù.

He explained that in such cases, the better pension of the two – one calculated on the years worked as a full-timer and the other on the self-employed years – would be credited to the individual.

The only condition is that the individual has worked as an employed person for at least 20 years and switched to self-employment in any time in the last 15 years before retirement age.