Try acting with a mask and singing aloud without spreading droplets… performing arts students are having to hone new skills and face some quirky COVID-19 challenges as they enthusiastically return to their extracurricular activities after a long absence.

Projection, diction and facial expressions in the performing arts have taken on a new – and harder – dimension as they grapple with masks, while romantic scenes are proving rather challenging.

This is the back-to-extracurricular-activity reality in COVID-19. But dancers are not put off by no contact whatsoever, not even in contemporary dance, and no pas de deux in ballet; while budding sopranos are singing ‘behind the screens’.

These are among the adaptations, beyond the measures of the health authorities, for what, in many cases, has been the first physical return to studios and workshops since they closed in the partial pandemic lockdown and opted for online tuition.

Schools are characterised by the now-familiar floor markings dotting the dance floors, smaller groups in spacious classes and staggered starting times so students do not mix.

Dancers in masks – only removed during high-intensity exercises in some instances – are sanitising their hands on entering the premises and again before entering studios, halfway through class and before leaving.

Lists of protocols for parents have been drawn up in long documents to show how extracurricular activities can happen in a safe environment.

At the Brigitte Gauci Borda School of Dance, in Sliema, the ‘big job’ of creating a COVID-19 safe environment was worth it because students and parents are feeling less worried thanks to regimental precautions.

So much so that some parents of children aged between four and 10 have opted to send them to dance classes instead of school, said the principal, Brigitte Gauci Borda.

“They feel it is safer, with smaller groups and bigger social distancing for less hours a week.”

Apart from zero contact between them, dancers are not using equipment either, with sanitising before and after use being too time-consuming.

Attendance has been poor in some extracurricular classes for the younger age groups in particular. But Luxol football club brought its own student population down to 550 from 670 to be able to manage the situation better, opting for an even stricter approach due to the reopening of schools, said its technical director Pippo Psaila.

The club has set up its own contact tracing and communication network, suspending friendlies until a vaccine is available and employing COVID marshals to ensure adherence to its protocols.

Adapting drama teaching for social distancing has been a challenge, with the discipline intrinsically involving both physical and verbal communication.

First the essential and then the extracurricular

But rather than approaching this as an obstacle, Lorraine Aquilina, director of projects at the School of Performing Arts, (SOPA) said the idea was to use the health protocols as a teaching and learning challenge.

Since drama is all about facial expression and communication, students have been asked to wear clear-fronted masks. 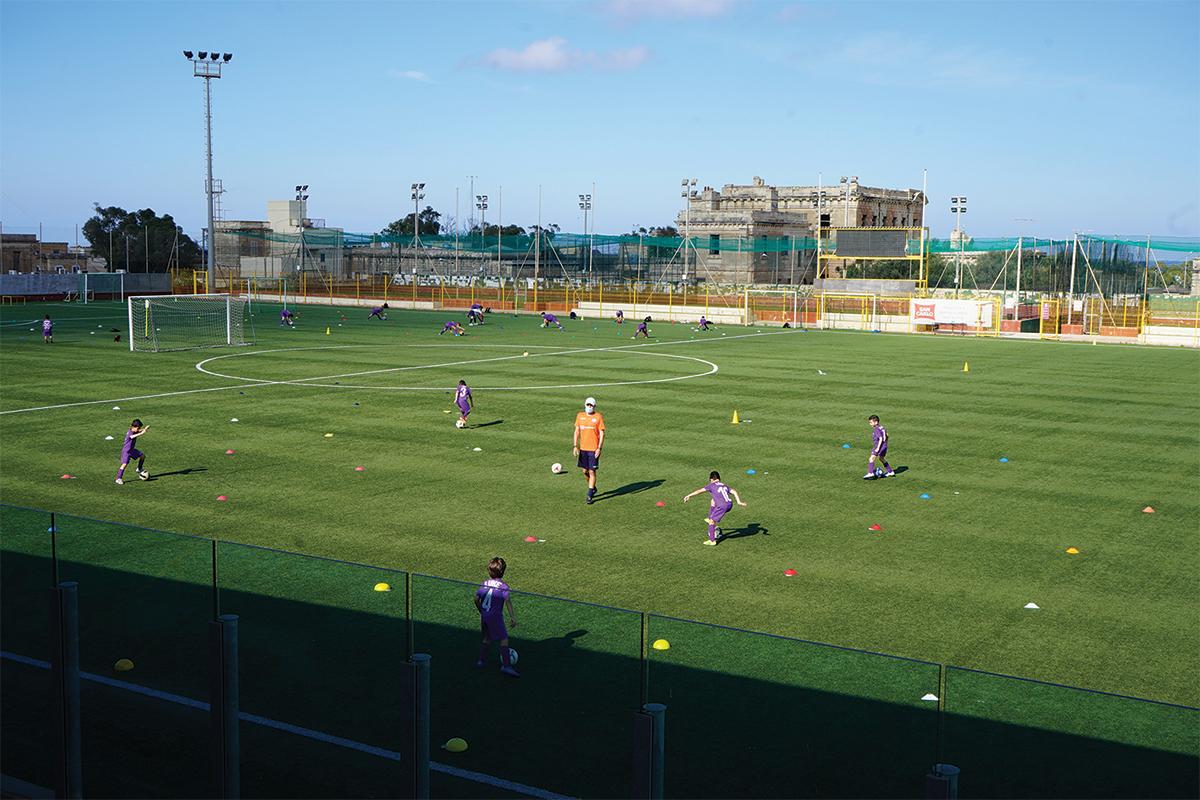 They are being trained to sanitise any props used and avoid face-to-face communication.

“On stage, actors should speak facing the front, or the diagonal, so tutors are using this important acting skill to prevent students from facing each other,” Aquilina pointed out.

“Our younger students have become superheroes and fairies, and we have turned each personal space into a flower, or special superhero situation, which they are eager to protect from intruders,” she said, highlighting the importance of making them remember the new rules with enthusiasm.

SOPA intends to tackle the issue of romantic scenes by challenging students to come up with the most innovative way of showing affection without contact. Singing is another test as social-distancing measures are stricter. But the introduction of roll-up screens has solved the problem, while protecting the tutors.

These have also put timers on their watches to remind students to sanitise their hands every 15 minutes.

“Performing arts are about creativity, enjoyment, technique, but mostly discipline.

“These protocols have merely imposed some more, which, if approached and supported correctly, may also help develop certain skills,” Aquilina said.

Hugging is not allowed at Masquerade – “a new normal for drama students”, according to Veronica Bezzina, the head of the performing arts school that opened its doors again last weekend. 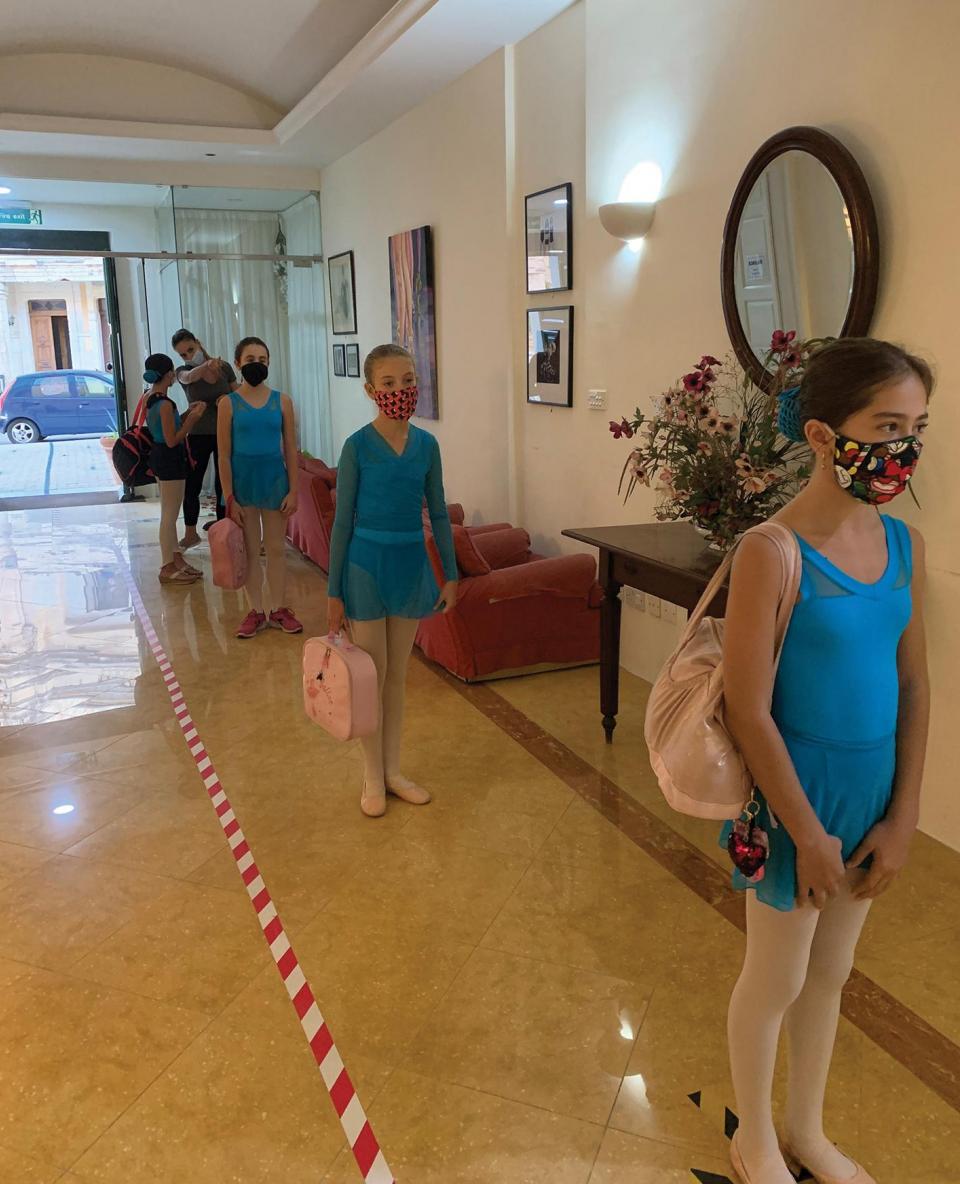 Spaced out: Ballerinas at the Brigitte Gauci Borda School of Dance.

Inside a drama class, physical games are tweaked to suit this new normal too, with lots of work done in a circle and more focus on solo abilities, voice clarity and projection – through a mask.

Students have an earlier start on Saturdays, with timetables shifting to avoid clashes between groups, and parents are getting used to waiting outside the premises.

“But we were amazed at how cooperative and keen to return to the studios our students and parents were,” Bezzina said.

‘The show must go online’

International acting, singing and dance exams at the School of Performing Arts will be held online for the first time this term, meaning that they will be filmed and sent to examiners overseas.

Performances are also going virtual, with a piece, The Show Must Go Online, written specifically for online performance this summer, said Aquilina, who believes film needs to be looked into as a performance platform until normality resumes.

“Although nothing beats the thrill of live performances, filming them is a new experience for students,” she acknowledged.

But not everyone is ready to go for it, and Liliana Fleri Soler, from Creativity for Life, is biding her time after a summer that saw her continue with art lessons but lose money, saying she is “a bit fearful” of opening just yet.

“We were really strict and had no repercussions, with a bubble system that grouped friends and families and kept others in tight cohorts,” she said, adding “it is now wise to do things step by step”.

“First the essential and then the extracurricular,” she said.

She also acknowledged that arts students would not necessarily lose their momentum if they stopped for a while, unlike dancers, for example.

As a chemistry and biology tutor, she has also adopted the wait-and-see approach and is still undecided as to whether to offer online private lessons, or not.

“The more we open up, the riskier it is,” Fleri Soler said, pointing out that COVID-19 is a cheeky virus that gave a false sense of security.