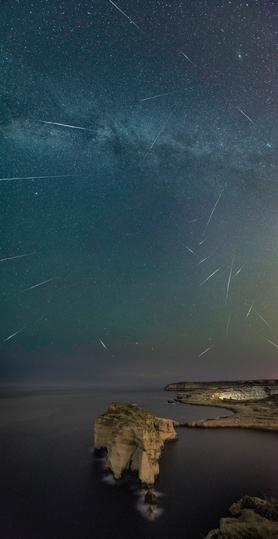 Perseids meteors over Dwejra Bay and Fungus Rock, Gozo. A composite image of 24 meteors captured over a period of 90 minutes on August 14, from the collection Starscapes of Malta, a series of landscape astrophotography images by Gilbert Vancell. http://gvancell.com

The Perseid meteor shower reached its maximum intensity on the night of August 12 to 13. Many people all over the world, including Malta, saw them with their naked eyes. These shooting stars are popularly known as the ‘Tears of St Lawrence’ – a Christian deacon said to have been martyred by the Romans in AD 258.

Every year between July 17 and August 24, the Earth intersects the path of comet Swift-Tuttle, which leaves scattered dust and debris during each of its passages around the sun. Upon entering the Earth’s atmos­phere at over 200,000 km/h, the particles heat up until they become incandescent and disintegrate. This is what also makes the air around them glow briefly – and we call them shooting stars or meteors.

The comet was discovered in 1862 and last returned in 1992. Computations of its orbit indicate that it might come close to the Earth and possibly collide with it, some day. Because of its relatively large size (it is more or less the size of Malta) it has been described as the single most dangerous object known to humanity.

One could see Perseids during the entire period in which the Earth crossed the orbit of the comet, but the night of August 12 to 13 was the most favourable for their observation. This is because the cloud of cometary particles is not homogeneous, and that night, our planet passed through the most densely-populated part (ice and small mineral particles), so the amount seen outnumbered that on other nights. However this year the peak happened to occur in the evening hours. At that time over Europe the sky was still too bright to hope to see any shooting stars.

The best instrument to observe shooting stars remains the naked eye, because these ephemeral stars occur randomly in any region of the sky. We must therefore try to cover the largest possible field of view with our gaze. For this, it is best to sit back in a deck chair or lie on the floor and wait.

But to make the most out of it one should ideally move away from light sources such as street lights, car headlights and floodlighting to fully enjoy the show. Light pollution is one of the greatest factors working against meteor astronomers. Wasted light creates the familiar yellow/white skyglow we see in the night skies.

Perseid meteors are often short and fast – a few of them, usually the fastest, can even leave a lingering trail behind them that can be seen to change shape over a period of a few minutes as its shape is changed by high-altitude winds. The next major meteor shower appointment is the Geminids on December 14.

In September only the planet Saturn will be easily visible in the evening sky, low in the southwest as darkness begins, in the constellation Libra. Mercury should also be visible, but with difficulty, at dusk during the first week or so of September in the west-southwest. Use binoculars to find it in the constellation Virgo.

The brighter planets Venus, Jupiter and Mars can all be found in the dawn skies during September. Rise early, before dawn, to observe this dance of the three planets low in the east. Venus reaches greatest brightness on September 21.

During the early hours of September 28, the full moon will cut through the Earth’s atmosphere for sky watchers in the Americas, Europe, part of Africa and the Middle East, in a lunar eclipse.

The darker part of the eclipse (umbral) will begin at 3.07am with the moon becoming totally eclipsed at 4.12am. It reaches its darkest stage at 4.48am, which is also the instant at which full moon occurs. It will then start moving off of the Earth’s shadow at 5.23am. The eclipse will end at 6.27am and sunrise occurs shortly after at 6.53am.

Lunar eclipses are easy to watch with the unaided eye, requiring no eye protection. Any pair of binoculars will offer superb views of this event.

Post your images of this eclipse shot with your zoom camera or even your smartphone on our Facebook page.

Tuesday – Neptune opposition at 4.12am.

Saturday – Last quarter moon at 11.54am; Moon close to Aldebaran in Scorpius.

Alexei Pace is president of the Astronomical Society of Malta.