The head of the Nationalist Party's media company, Pierre Portelli, resigned on Monday night as he launched a scathing attack on members of the parliamentary group, although he stopped short of naming anyone in his resignation letter.

The letter, dated June 14, was made public in a Facebook post in which Mr Portelli announced he was stepping down.

Mr Portelli, former editorial director of The Malta Independent, is widely believed to be the man who had encouraged Dr Delia to stand for the PN leadership contest two years ago.

He was then appointed head of Media.Link by Dr Delia.

Mr Portelli said that while he was resigning from his job at Media.Link, he would be keeping his seat on the party's executive committee.

Some MPs... who went as far as sustaining and aiding criminal activity by third party simply to get you out of the way."- Pierre Portelli

Mr Portelli said he had initially offered to step down last week but had stopped short of doing so after speaking to Dr Delia.

He returned to that initial decision following an executive committee meeting held on Monday evening, he said in his Facebook post.

In his letter to Dr Delia, Mr Portelli said that persevering in his role would not bring further changes "due to the constant and coordinated attacks on the party and its media by some of your MPs within the parliamentary group, who went as far as sustaining and aiding criminal activity by third party simply to get you out of the way".

Some within the party, he added, “insist they have a divine right to lead and control the party and its media platforms”.

Mr Portelli said he would return to the private sector, but would continue to support Dr Delia in his resolve to push a new way for the PN.

"The reality that surrounds us today demands of us to take serious action and cleanse the party from people who continue to stall the PN in bad faith.

"Our vision was to open up the party and its media to new ideas, new people and new solutions for our country. Unfortunately, I came to realise that that dream needs to wait the revolution to take place, one that draws up new rules of engagement that are clear to all those seeking office under the PN brand," Mr Portelli said. 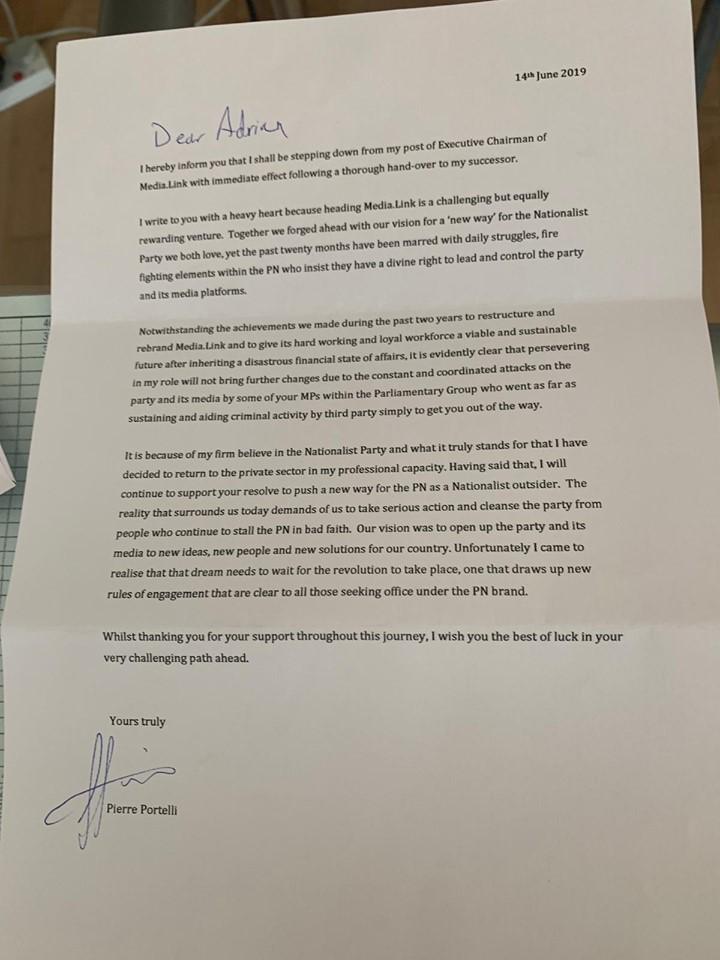 Mr Portelli made his Media.Link resignation public late on Monday night, once the PN executive committee meeting had ended.

Members of the PN executive appeared angry and irritated as they exited the party headquarters late in the night, with sources saying Mr Portelli had ended up railing against perceived enemies of the party, including the Times of Malta, in an speech which turned sour.

“He blamed MŻPN, #OccupyJustice, the Times, and last but not least and worst of all, Daphne [Caruana Galizia],” a source who was at the meeting said.

Mr Portelli said Ms Caruana Galizia had set out to destroy Dr Delia even before he was made PN leader, people at the meeting claimed.

His reference to the late journalist who was murdered 20 months ago incensed many people in the room, sources said.

"It descended into a shouting match," one person at the meeting said.

'I'm attacking you, not her'

Another person in the room who is closer to Dr Delia said Mr Portelli's point was that some MPs were using the memory of Ms Caruana Galizia to gain their own political mileage.

"He told them, 'I'm attacking you, not her'," the source recalled.

Tensions had been rising throughout the meeting, another said, with Mr Portelli having failed to impress attendees with a list of 10 points to move the party forward, which included more meetings with party members and social media rules for party officials and MPs.

The resignation comes as Dr Delia is expected to convene his parliamentary group on Tuesday evening.

The Sunday Times of Malta reported that the PN’s parliamentary group is expecting Dr Delia to relay a decision about his future after having given him a “few days” to reflect, consult and decide.

Mr Portelli was appointed chairman in November 2017, shortly after Dr Delia was elected PN leader of the PN. The party has since been rife with internal fighting, culminating in an electoral thumping in the European and local council elections.