Pietro Paolo Azzopardi was a gifted 19th-century wood carver – or sculptor – who made a number of wooden processional statues, including titular statues and five Holy Week effigies that are still regularly carried in procession these days.

Azzopardi was born on April 20, 1791, at Valletta. Christened Salvator, Joseph, Petrus, Paulus and Jeremias in that order, he was the son of Antonio and Maria née Camilleri. However, he was known as and always signed his name “Maestro Scultore Pietro Paolo Azzopardi”, indicating also that he was proud of his craftsmanship. It seems that in an age when illiteracy was widespread, even among respected craftsmen, Azzopardi received, at least, an elementary schooling. 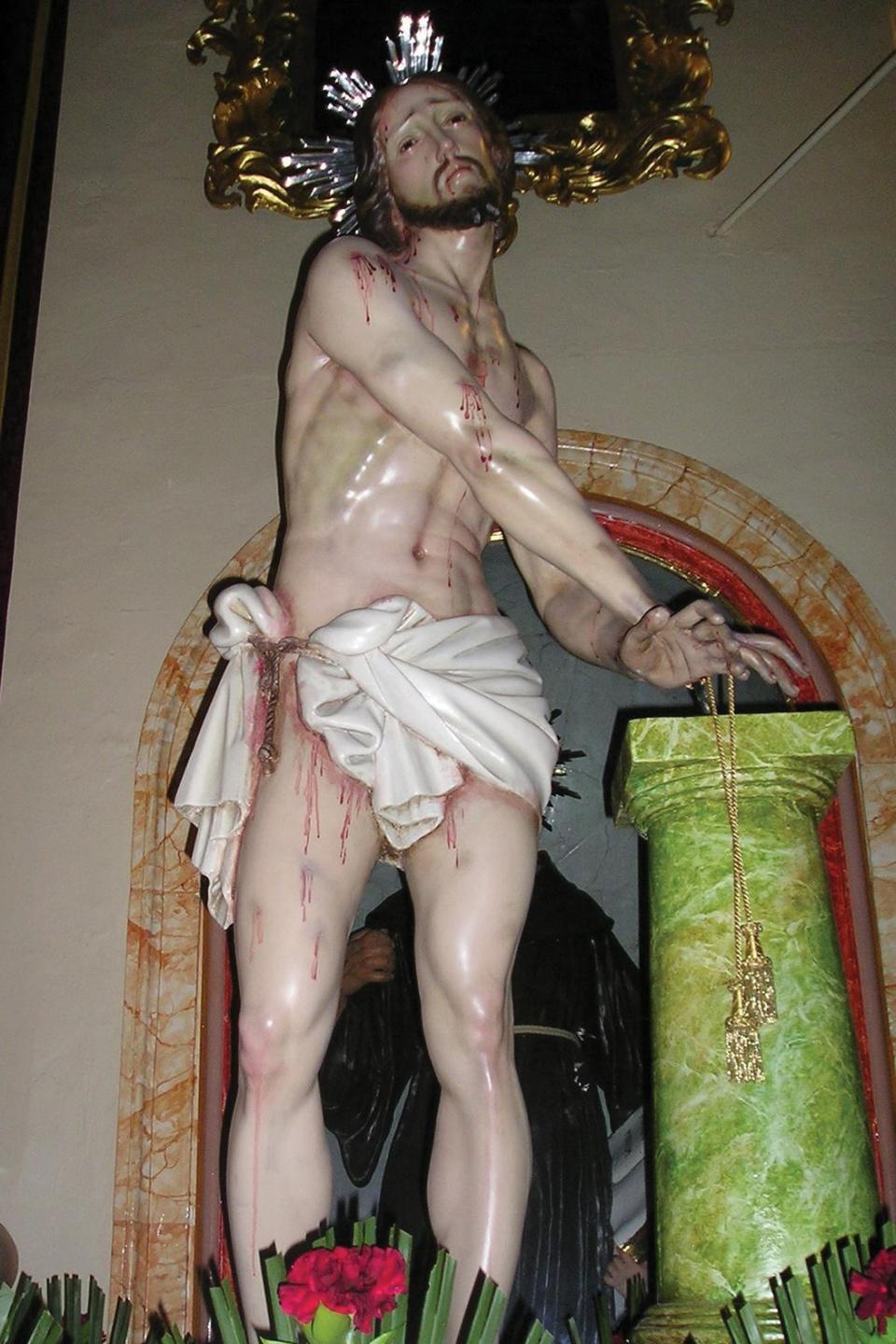 Scourging at the Pillar, sculpted for Valletta in 1834.

His father passed away in 1808, when Azzopardi was only 17 years old but this early loss and future family tragedies only seem to have strengthened his determination to succeed as a craftsman. Actually, his first known work is an 1808 stone statue of Christ the Redeemer.

In 1833, Giovanna died and, three years later, he married Antonia Attard, this time in Valletta. This happy but childless marriage endured till 1864 when Antonia passed away. They lived at 7, Strada Ponente, Valletta, where Azzopardi had a casa-bottega. His last-known carving, or sculpture, was executed in 1865 and his demise occurred of celebrite cronica at his son Giuseppe’s residence (123, Strada Forni, Valletta) on October 24, 1875, aged 84 years. He was buried at Tarxien parish church.

Although very little is actually known of his life, he must have been very interested in the Maltese artistic milieu because he was a member of the Corpo delle Belle Arti del Disegno.

In 1836, he voted in the election of Michele Cachia, an architect, and Pietro Paolo Caruana, a painter, who represented the Corpo  before the Royal Commission sent to inquire into the affairs of Malta.

In essence, Azzopardi was a wood carver. Such artisans carved (or sculpted) and polychromed wooden effigies to be carried in religious processions. 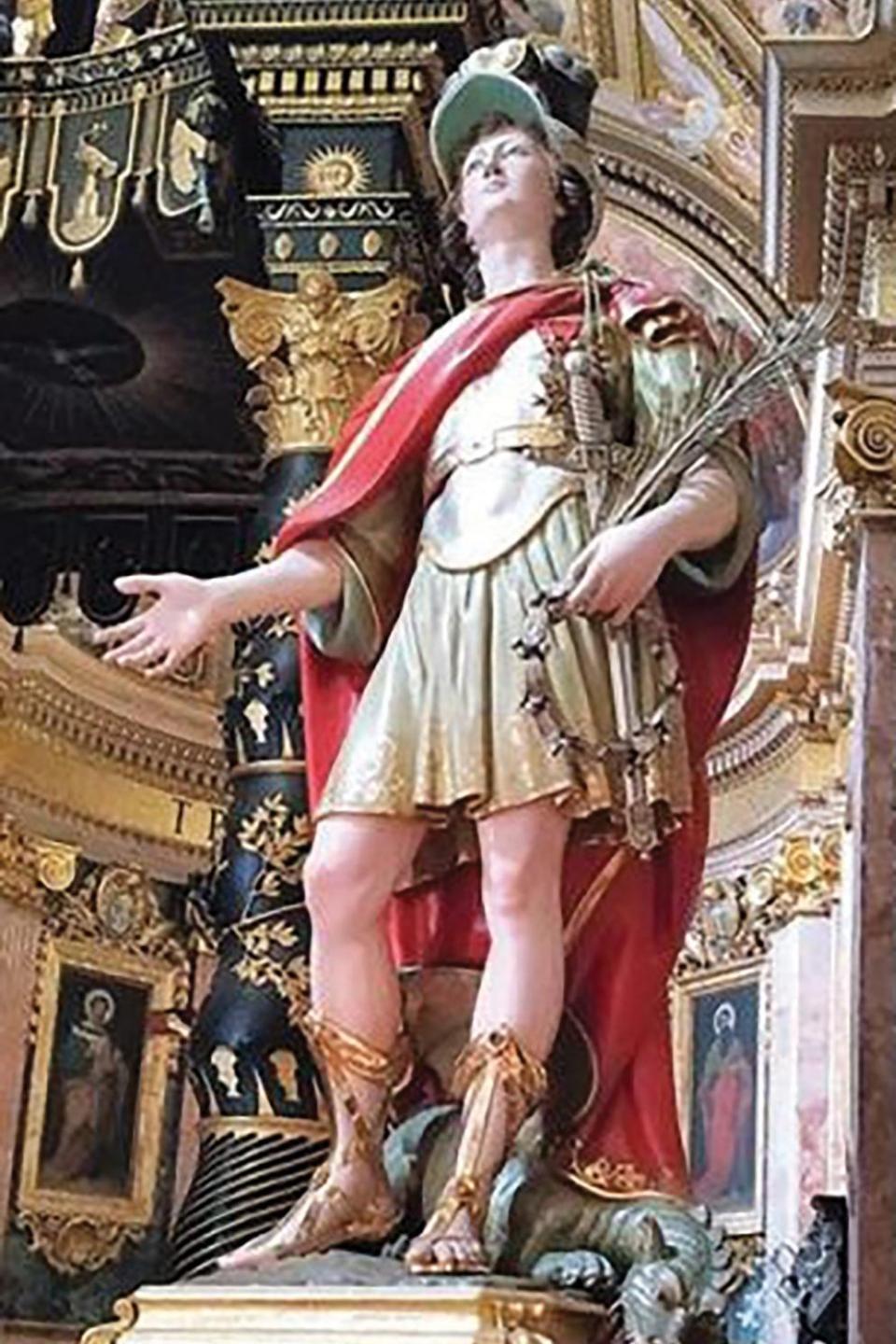 The titular statue of St George of the parish at Victoria. It was sculpted by Azzopardi in 1839 and was probably an ex-voto. It was the first titular statue commissioned for Gozo.

He was one of the last 19th-century carvers to chisel statues that today constitute a sizeable part of Malta’s sculptural heritage in wood. Pietro Paolo Castagna states that Azzopardi was one of Mariano Gerada’s pupils and what he termed “a sculptor by appointment to King Ferdinand II” of the Kingdom of the Two Sicilies.

However, there is no documentary evidence to substantiate and corroborate these assertions, though it is more than probable that Gerada taught him the elements of figure sculpture. After all, Gerada and Azzopardi were contemporaries.

His first works were stone effigies representing Christ the Redeemer (as already stated) and St Catherine. In 1824, he probably completed Gerada’s unfinished processional statue of Our Lady of Graces for Żabbar and, in 1828, he sculpted his first major work: Our Lady of the Holy Rosary for Cospicua. To earn a living, Azzopardi also carved various wooden figureheads (puleni) for sailing ships and also other ornamental furniture.

His last-known carving was executed in 1865

No fewer than five Holy Week statues were carved by Azzopardi. The first one was The Scourging at the Pillar, in 1834, for the Valletta Good Friday procession, an exquisitely-carved figure that has been described as one of his “most stirring works”. In 1841, the Cospicua procession was enriched by two of his carvings featuring another Scourging at the Pillar and an Ecce Homo (or The Crowning with Thorns) after they had been commissioned in 1838. The latter’s bozzetto is still extant in the chapel of the crucifix in the Cospicua parish church. A poignant wooden Crucified Christ for the statuary group of The Crucifixion (popularly known as Il-Vara l-Kbira) was completed in 1848 for St George’s parish church (now a basilica) of Victoria.

However, his last Passion effigy involved him in a legal wrangle at the law courts, which shows Azzopardi as a man who stood up for his rights. The statue in question was that of Jesus Carrying the Cross (Ir-Redentur), commissioned for the Cospicua Good Friday manifestation in 1855 but carried in procession for the first time in 1858. 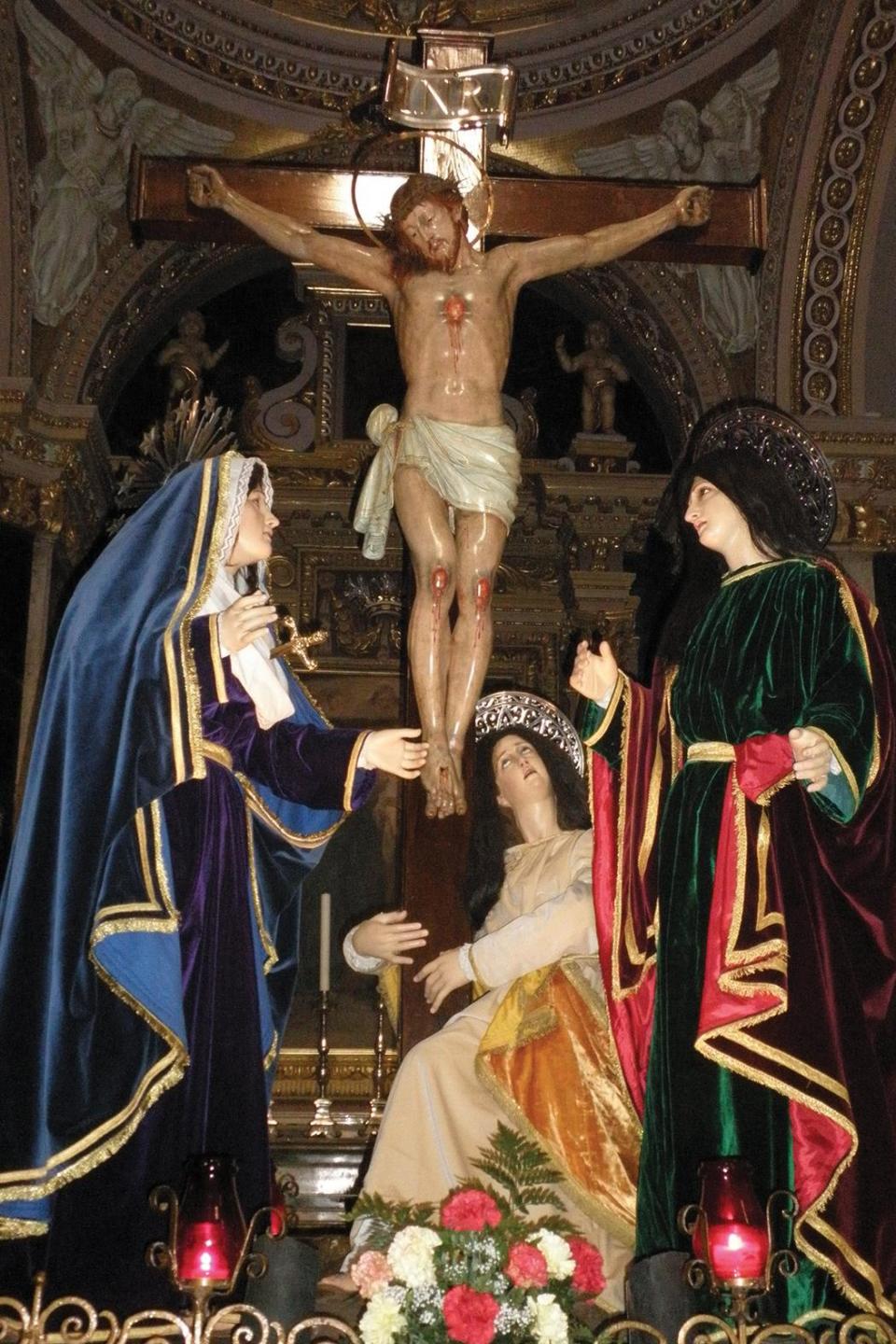 The statuary group featuring The Crucifixion of Victoria, parish of St George. It includes the Crucified Christ sculpted by Azzopardi in 1848.

The Holy Cross Confraternity refused to pay Azzopardi the agreed amount of money, mainly because they contended that the finished product did not conform with the agreed model. However, a panel of experts that was appointed by the court found in favour of Azzopardi, who also won the appeal, with all costs having been borne by the confraternity.

Azzopardi was the first sculptor to carve the first titular effigy for Gozo when, in 1839, he delivered and was paid for the statue of St George for the parish church (now a basilica) at Rabat (now Victoria), which, apparently, was commissioned as an ex-voto effigy in 1838.

The year 1845 witnessed the inauguration of another of his titular carvings, that of St John the Baptist for Xewkija.

In 1853, a private patron commissioned the half full-size wooden statue of Marija Bambina for Mellieħa.

Azzopardi was a gifted sculptor who certainly gave a very valid contribution to Malta’s artistic heritage. His surviving works are very fine examples of traditional woodcarving and have been described as being “a living witness to the special cultivation of handcraftsmanship” in the Maltese islands.