Pilatus Bank’s directors are taking legal action against the financial services watchdog in a bid to take back control of the bank, just a month after the authorities placed tough sanctions on it, The Sunday Times of Malta has learnt.

The bank’s move has raised concerns within the Malta Financial Services Authority that money held by the bank could potentially be moved if the attempt is successful, according to a source at the MFSA. Other sources said it might have implications for an ongoing investigation of the bank’s servers being conducted by the MFSA and the Financial Intelligence Analysis Unit.

The regulator will fight back, the MFSA source said.

Pilatus Bank has been at the centre of a political storm on the island, with a whistleblower claiming Prime Minister Joseph Muscat’s wife Michelle held an account there which received graft from Azerbaijan’s ruling elite.

The bank has also been tainted by FIAU reports, claiming evidence of money laundering by the Prime Minister’s chief of staff and flagging up serious compliance shortcomings in anti-money laundering procedures. More recently it was revealed the bank acted as a conduit for Azerbaijani millions making their way into  Europe.

Back in March the financial services watchdog had issued a number of sanctions against the beleaguered bank after its Iranian chairman Ali Sadr Hasheminejad was arrested in the US for alleged sanctions busting and money laundering.   Although the alleged offences occurred before the bank was set up, the chairman was made to step down and was replaced by a competent person who is trusted by the authorities to watch over it.

The MFSA then issued another round of sanctions, effectively seizing all the bank’s operations. “The bank was put in a straitjacket with these sanctions and it cannot operate. We seized it entirely,” one high-ranking MFSA official said.

He said the bank’s directors were arguing this was too harsh and that the MFSA was disproportionate in its actions, but the regulator will be defending those decisions. 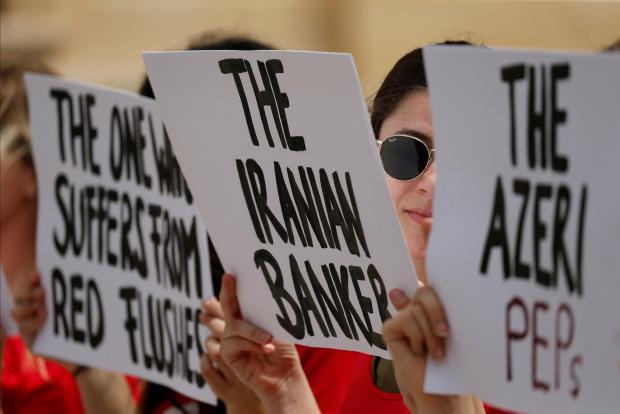 Pilatus and its director Mr Sadr have been high on activists' list of concerns. Photo: Darrin Zammit Lupi

In an appeal filed with the Financial Services Tribunal, seen by The Sunday Times of Malta, the bank’s six remaining directors argue that the sanctions are, among other things, “manifestly unfair”, “disproportionate” and “abusive”.

The directors, through their legal representation Deguara Farrugia Advocates, are also insisting that the MFSA did not apply the law correctly, ceasing the banks operations entirely. Asked about this, the same MFSA source conceded the watchdog had been hard but the positions were well thought out and the sanctions had only been issued after lengthy consultation, including with the authority’s legal team.

The MFSA has until Thursday to submit its reply to the appeal and will then head to the Malta Arbitration Centre, where the tribunal, which functions as a court, will deliberate.

The tribunal is headed by Pierre Lofaro, a lawyer and husband of Magistrate Abigail Lofaro. Its other members include former Malta Stock Exchange director Joseph Azzopardi and David Fabri, the head of the Department of Commercial Law at the University of Malta, among others.

Meanwhile, questions have been raised about Mr Hasheminejad’s claim in a US court that the Ta’ Xbiex bank was “winding down”.  The MFSA source told The Sunday Times of Malta that this was impossible under the current sanctions.

“For the bank to wind down, it would need to be able to operate – which it currently cannot.” The bank could not wind down of its own accord. And the authority planned to keep the bank in lock-down until a thorough investigation of its servers was completed, he said.

“The MFSA’s and FIAU’s investigation would need to be concluded before such action could even be considered,” the source added.

The MFSA is not excluding the possibility of issuing further sanctions against the bank if the investigation uncovers any other irregularities.

On the rumour that the bank had already wound down its London premises in preparation for a similar move in Malta, the source said the office in London Mayfair was not operational. It was closed down by the competent person appointed to watch over the bank, and this to cut costs and not as a result of regulatory actions by UK authorities.