The Nationalist Party has made inroads into Labour’s massive majority, but Robert Abela’s ability to lead Malta as its prime minister has risen over the past month, a survey commissioned by Times of Malta has indicated.

These results suggest Abela has widened the gap between himself and his direct rival to just under 33 percentage points from the roughly 27 registered in a similar survey in July.  While Abela appears to have strengthened his position among voters, the PN appears to have managed to claw back voters over the past month.

Survey data indicated a shift of three percentage points in the PN’s favour, with analysts predicting 44.91% of respondents would vote PN if an election were to be held now, versus 53.81% for Labour. In July, that split stood at 41.8% (PN) to 56.9% (PL).

That predicted swing must be interpreted with caution, however, as it falls within the poll’s +/-4% margin of error.

The survey, commissioned by Times of Malta and carried out by market research group Esprimi, surveyed 600 members of the public between August 9 and 25. It used quota sampling techniques to ensure a representative spread of age, gender and geographical distribution.

Calculations about people’s voting intentions were made by Esprimi’s sister company Lobeslab using machine learning techniques to narrow down the share of respondents unwilling to clearly state how they intend to vote.

Almost one in every four res­pondents – 24.8% – either refused to disclose their voting intention or said they did not know who they would vote for.

Support for third parties such as ADPD remained negligible, while 19% claimed they would not vote at all. Voter turnout at the 2017 general election topped 92%.

What is motivating voters’ choices?

More than one in every three Labour voters said they liked all the party’s policies, with many others also citing the national health system, the economy and the party’s handling of pensions and employment as motivating factors. All these factors were largely unchanged from one month previously.

PN voters, on the other hand, cited the party’s anti-corruption policies as their main voting driver (31.9%), while many said they would vote Nationalist because they wanted to see a change in the party in government (25.5%, up by 15.4 percentage points).

That line of argument has been pushed by the PN’s new strategist Christian Peregin, who has said that he quit journalism to join the party because of the widening democratic deficit between the Labour and Nationalist parties.

PN consolidates its base

While shifts in people’s voting intentions are hard to predict with accuracy as they are within the poll’s margin of error, the data suggests that the Nationalist Party is consolidating its base vote.

The Labour Party’s support among its base remained constant, with 75.5% of its 2017 voters saying they will vote PL again in the next election.

Those who voted PN in the 2017 general election appear to have grown more confident in assessing the current government’s performance than they were just one month ago. Back then, 17.6% of them said they did not know whether it was doing well or badly. That figure now stands at just 6.3%, with more than two out of three (67.7%, up 9.4 percentage points) saying they think the government is doing a bad job.

That group was significantly more likely to pinpoint corruption (65%, up by 13 percentage points) as a primary reason they believe the government is performing poorly. 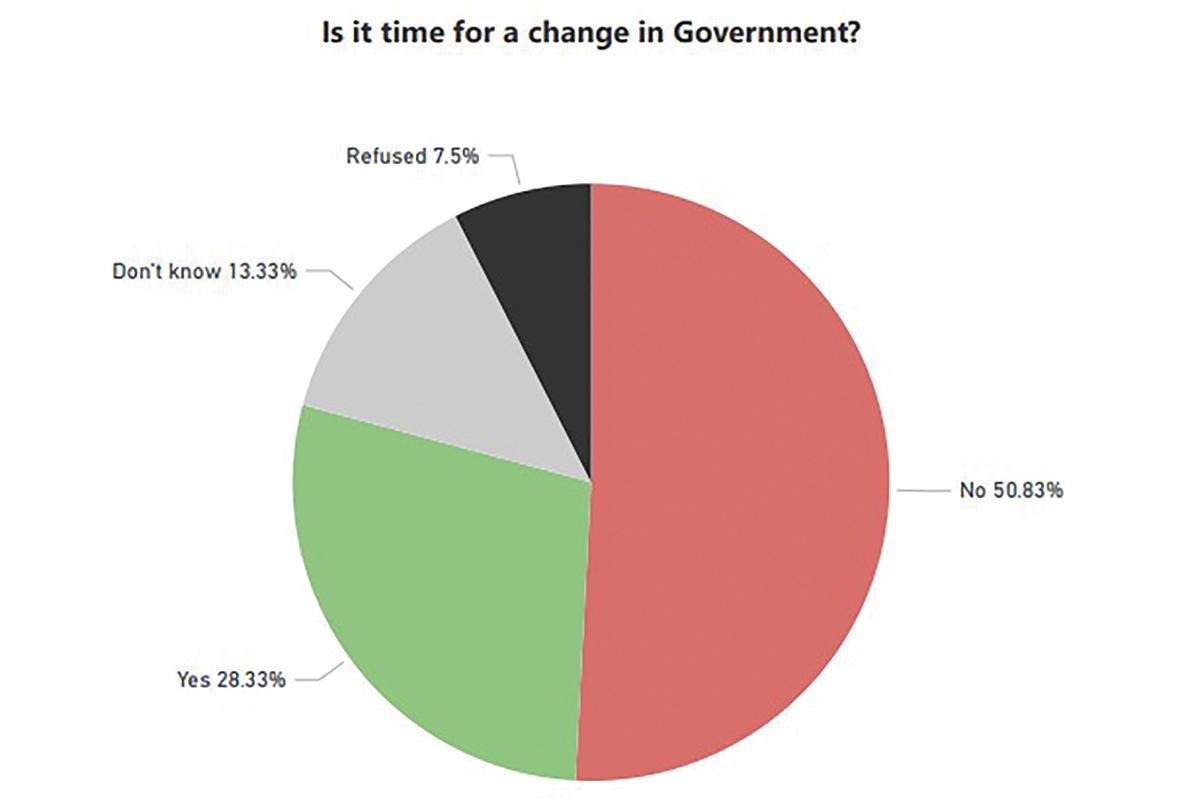 Respondents were surveyed in the weeks after a public inquiry into Daphne Caruana Galizia’s ass­assination found that the state bore responsibility for her death.

When asked whether the government has done enough to address problems flagged by the inquiry, respondents were split almost equally down the middle, with 19% saying they don’t know.

A closer look at those figures reveals that Labour voters are the only voting cohort in which a majority of people think the government has done enough to address problems. 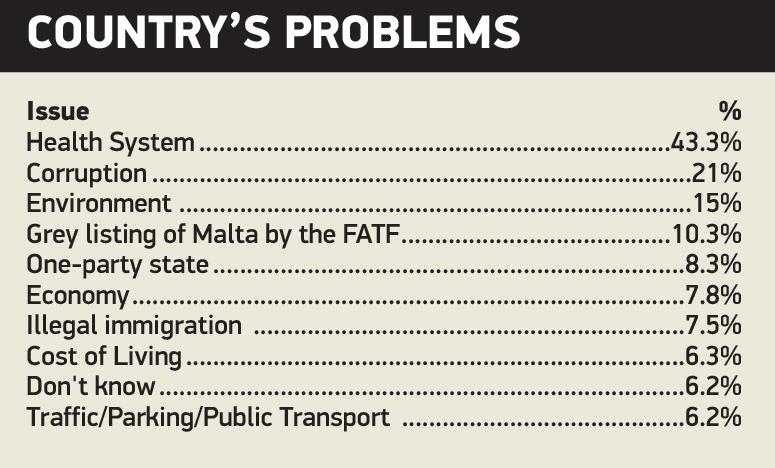 Public disillusionment with political parties rose over the past month, and almost 39% of people believe no political party is best suited to solve the country’s problems – an increase of 8.3 percentage points over the previous survey.

Despite that general lack of trust in the political system, a significant majority of people continue to believe that the government is performing well (56.8%, up by 2.7 percentage points), with many of those citing its handling of the COVID-19 situa­tion as a primary reason for that belief. Gozitan residents and those in southern harbour localities were the most upbeat about the current government’s performance, while dissatisfaction was highest in western district localities, as was the case in July.

People’s economic forecasts for the next 12 months were significantly sunnier than they were one month previously when the FATF greylisting was still fresh on people’s minds.

Conversely, the share of people who expect things to get worse for themselves, their family or the country was down.

The steepest decline was registered among those who expect the economic situation in Malta to get worse (18% of respondents, down from 29% one month ago).

What are voters worried about?

Voters’ concern about the national health system plummeted by 18.8 percentage points, but it remains the biggest single concern on people’s minds, with 43.3% citing it as a national problem.

Worry about the environment, on the other hand, rose by 6.1 percentage points over the month to reach 15%. It is now the third-biggest concern on people’s minds, after corruption (21%).

Meanwhile, it appears respondents grew more comfortable with the idea of being on the FATF grey list.

While in July just over 16% of people cited it as a national problem, in August that figure fell to just over 10%. 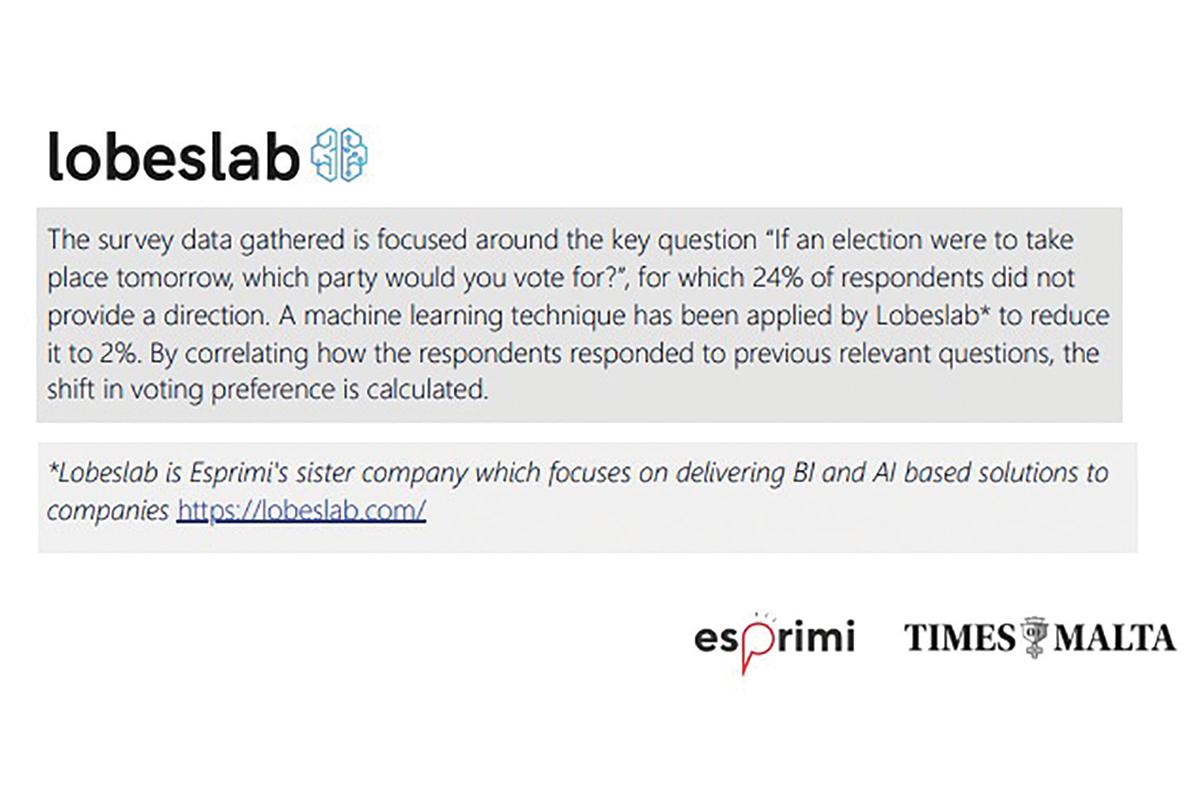 In a post on Facebook, Bernard Grech welcomed the survey saying the people are showing that the country needs change as soon as possible. They were seeing the PN as the positive force which can bring this about.

The PN, he said, is willing to continue changing for the country to reach its aspirations.