Embattled Nationalist Party leader Adrian Delia has not yet called a meeting of his parliamentary group despite the fact that the House of Representatives will return to business on Monday with a heavy legislative agenda after the Christmas recess.

Amid increasing pressure on Dr Delia to step down, following a raft of serious allegations about his private and public life and clear indications that he does not have the support of the majority of MPs, Dr Delia is delaying calling a meeting of the group, fearing a “showdown” with MPs.

“Until now [Friday evening], despite the fact that we start discussing important legislation and need to have a position by Monday, the parliamentary group has not yet been called,” one PN MP said.

Another MP added: “It is now clear that Dr Delia does not want to discuss his personal issues, which have spilled onto his public life and are damaging the party. He is clearly fearing that such a meeting will result in a vote of confidence in his leadership, which he seriously risks losing."

Times of Malta is informed that more than half of the PN’s parliamentary group have agreed that they will be in favour of adding their signature to calling on Dr Delia to step down as leader of the Opposition if he asks for a confidence vote.

It is also informed that other MPs are also likely to vote against him in a secret vote.

Also, two MPs from the Democratic Party and who also form the Opposition in Parliament, Godfrey and Marlene Farrugia, have already declared publicly that they have no confidence in Dr Delia. 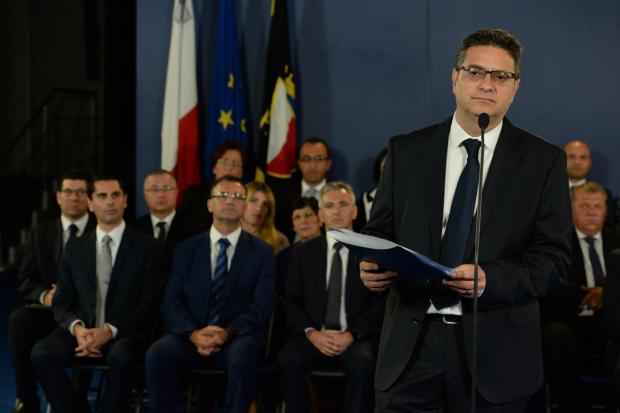 Does Adrian Delia have the support of his parliamentary group?

Asked on Friday to state when Dr Delia is calling a meeting of the parliamentary group, a PN spokesman did not reply.

On Thursday evening, during a reception at the PN headquarters, termed as a show of force in Dr Delia, the majority of PN MPs were conspicuous by their absence. And on Friday night, the Nationalist Party’s Sliema sectional committee  rejected a confidence motion in favour of leader Adrian Delia by 10 votes against three.

An attempt to test the waters prior to calling a parliamentary group meeting, which he needs to do for the PN to function in Parliament, Dr Delia on Friday started calling MPs individually in order to assess their opinion.

“I am informed that a number of MPs he met already told him straight and plain that he needs to make way if the PN aspires to be a credible Opposition,” a veteran MP said.

PN sources said that despite Dr Delia and his advisors, mainly general secretary Clyde Puli and his media head Pierre Portelli, are all conscious that he does not enjoy the confidence of many of his MPs, he is resisting resigning and turning the issue into some kind of plot against him by “the old guard”, referring to former PN leader Simon Busuttil and his former deputies.

However, various MPs said this is no longer about Dr Delia’s future as a party leader but about the existence of the PN.

“Unfortunately, it is clear for all those who want to see that with Delia at the helm and all the allegations he is facing, the PN can never be in a position to garner enough confidence among the electorate to win an election,” an MP said.

“The PN is there to offer an alternative. If with Delia it can’t be in a position to do this, its game over for us [PN] and for Malta’s democracy,” he said.

Resignation by Adrian Delia? Then what?