PN MP Hermann Schiavone this week endorsed a pitch by the Malta Developers Association (MDA) to have one of their members appointed on the board of the Building Construction Authority.

Schiavone, who serves as the PN's spokesman for construction and real estate, made the proposal during a parliament discussion this week about the draft law to set up the authority.

The Opposition MP proposed an amendment to the draft law allowing both the MDA and Chamber of Architects and Civil Engineers to be able to appoint a member on the authority’s board.

“I know that I am making a proposal that needs discussion, but I want you, minister, to consider them having a seat”, Schiavone told Environment Minister Aaron Farrugia at the end of the committee meeting.

Environmentalist Arnold Cassola has decried the appointment of an MDA member on the Authority’s board as an inherent conflict of interest.

Schiavone’s proposed amendment mirrors that of an internal document drawn up by the MDA about proposed changes to the draft law. 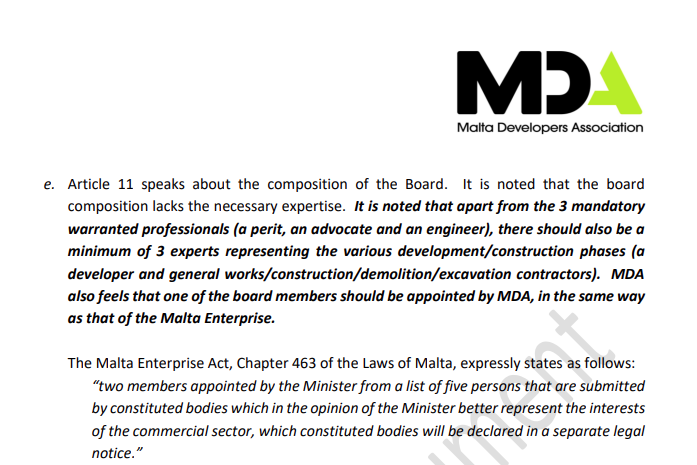 The MDA's proposal as seen in an internal document.

Last month, the Opposition MP stood up in parliament to praise the MDA, singling out its president Sandro Chetcuti and its director general Marthese Portelli, formerly a PN MP, for their work.

Schiavone told parliament last month that people "think the MDA is the regulator".

“They are giving a good service to the industry,” Schiavone said, adding that it was unfair how all developers were portrayed in a bad light.

“I know the majority of MDA members are serious people, people of integrity who do a lot of good for the country and employ many people. It is not fair that incidents like last year’s see the whole industry being blamed”.

Miriam Pace was killed in a house collapse linked to adjacent construction works last year, leading to a fresh push for better regulation of the sector.

Schiavone also reminded parliament that the MDA is not a regulator, but an association that safeguards its members’ interests and proposes ways to improve the sector.

His proposal this week will give the MDA a seat at the regulator’s table.