Independence Day celebrations in Valletta got off to a rocky start yesterday as the Nationalist Party found itself facing criticism over the decorations and street furniture rolled out for the occasion.

Over the past few days, the PN set up food stalls, tables and chairs in De Valette Square as well as goalposts and basketball hoops in front of the parliament building. 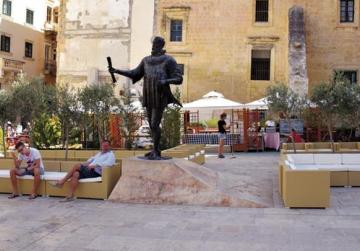 The lounging area surrounding the statue in De Valette Square.

Unfortunately for the party, the set-up brought to mind the harsh criticism that followed the setting-up of a single food kiosk in De Valette Square for carnival last February. On that occasion, the PN was quick to join the chorus of disapproval, which led to the Arts Council ordering the removal of the kiosk.

The party was also involved in widespread criticism of plans to move the monti stalls to Ordnance Street, which, it said, would cause an “eyesore” due to the proximity to the new parliament building.

Culture Minister Owen Bonnici, who had intervened personally to have the offending kiosk removed, appeared to be among the critics of the Independence Day set-up yesterday.

On Facebook, he posted several links to media reports of the street furniture with the comment: “Aħjar nigdem ilsieni” (“I’d better bite my tongue”).

When contacted, Dr Bonnici refused to clarify what he meant, saying only that people were “free to decide on whether some quarters in the political field should practise more what they preach”.

Responding to the criticism, a PN spokesman said: “We have developed a concept whereby we have brought the inside of our homes outside, with properly-organised spaces, decorations, lounging areas, a library and an environment that appeals to all those who attend the organised events.”

The spokesman said the decision to move the festivities from their traditional home on the Granaries, in Floriana was made in response to “an overwhelming desire to bring something new to this year’s celebrations”.

He described the new location as “the gem in the crown of a long series of achievements of Nationalist governments over the years: the Piano project, in a place restored to the glory it deserves, our capital city Valletta”. 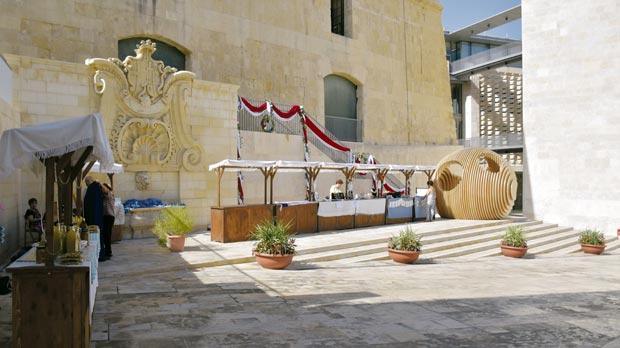 Stalls have been set up behind the parliament building.

“The outstanding differences from previous years reflect the continuous changes, the dynamics and achievements within the party.”

The incident has once again raised questions on additions to the area surrounding the multi-million euro regeneration project at Valletta’s entrance.

After the uproar on the kiosk in De Valette Square, the Arts Council pledged to introduce aesthetic guidelines for temporary cultural festivities to prevent a repeat. However, when contacted yesterday, a spokeswoman said the guidelines were merely an “an internal procedure for cultural events relating to the council”.

“Arts Council Malta does not have the jurisdiction to ensure that all events adhere to a specific policy on street furniture or decorations,” she pointed out.