Wreaths were laid this morning on a small memorial at Fort St Elmo where some of the first bombs were dropped on Malta in the Second World War.

A short, poignant ceremony was held by the Grand Harbour Regeneration Corporation for ex-servicemen and war veterans on the memorial to six Maltese soldiers killed exactly 74 years ago – June 11,1940 - hours after Italy’s Benito Mussolini joined Germany in the war against Britain.

An AFM trumpter sounded the last post and those present stood to attention, medals gleaming on their chest and colours lowered as memories floated back to those troubled times on the sun-baked fortifications. 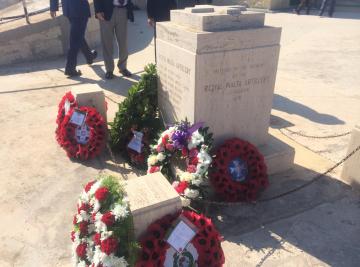 Those who had a narrow escape during that air raid included former President Censu Tabone, then a young military doctor at Fort St Elmo.

The events of that day are recalled in Dr Tabone's biography - Censu Tabone, The man and his century. The author, Prof Henry Frendo, wrote:

"No sooner had the night passed that the enemy planes struck...Censu hurried out of bed. He quickly dossed short and trousers, no time for epaulettes, and rushed to his post at the medical inspection room in the yard. Just them the bombs started dropping on and around St Elmo. Six bombs exploded. It was 'an earthquake'. The bombs fell in a straight line. Between the fifth and the sixth bomb his own room missed a direct hit. As soon as he strayed in the direction of his action station, the MI Room, he was stopped in his tracks by news that people had been killed. Having been assured that there were no wounded persons, he remained on call at his action station..."

"Soon after this, Censu was faced by an enormous queue for the sick parade. Usually he would have three or four persons reporting sick. In the army, you knew if a doctor was worth his salt when he had short rather than long sick parades. Long parades meant that the doctor pampered the would-be patients. On June 11, 1940, queuing up before Censu for inspection, there was 'three-fourths of the regiments'. They were all reporting sick, to go away to hospital.

"Censu went to the door and addressed them in these words: 'Friends, everybody is frightened. Look at my face. I am as frightened as you are. But our place is here. Those of you who are ill and wish to stay, do so, the others, go back to your duties.  One by one they started retreating until they all went back to their posts. Those few words from the heart, not a lot of shouting, worked. A bond of respect was strung which would last a lifetime. They were all terrified at this first encounter with death. But not one remained for the usual sick parade, not one."