The police have dropped charges against Birdlife activist Caroline Rance after an inspector admitted she was charged by mistake in a case instigated by the hunting federation.

The police charged Birdlife activists Fiona Burrows, Nicholas Barbara, Caroline Rance and Rupert Masefield for the possession of protected bird species after they appeared in a published photo holding dead birds as part of their work to highlight illegal hunting. 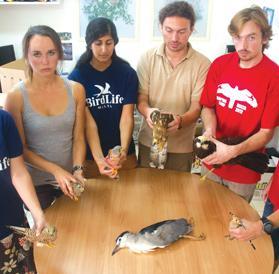 When the case continued today, police Inspector Jurgen Vella  admitted that Ms Rance, who is now Birdlife's public relations officer, was charged in error because she was not in the photo. The charges were withdrawn in the sitting.

Taking the witness stand, FKNK CEO Lino Farrugia said he could not identify all the activists in the photo but knew Nicholas Barbara, Birdlife conservation manager, and Rupert Masefield, who was a spokesman.

Mr Farrugia said it was the police's job to establish the identities of the Birdlife activists in the photo.

FKNK president Joe Perici Calascione testified as to why he felt he had to institute these proceedings.

“We felt there was a disparity in the way justice was being administered. If I was found in possession of a protected bird, irrespective of how I came into possession of it, I would be prosecuted," he said.

Asked by Birdlife defence lawyer if he could tell if any of the birds in the photo were alive, Mr Perici Calascione said there was the possibility that some of the birds were alive but he did not carry out an investigation into the birds.

Lawyer Stephen Tonna Lowell is appearing for the Birdlife activists. The case is being heard by Magistrate Anthony Vella.