A note addressed to St Philip was found inside the crucified cat on Monday written in a wretched and self-pitying tone, bemoaning the neglect its author suffered, Times of Malta has learnt.

The bloodied note was inserted in between the cat’s outer skin layer and its muscular layer as it hung from the statue of St Philip on the parvis of the Mosta dome.

The contents of this note, as well as of two others that had been attached to the crucified cats found in 2012 and a fourth that was attached to a dog that was also found crucified in 2011, were divulged to this newspaper.

The author of all four notes draws on circumstances that would bring to mind the case of Franġisku Buhagiar, 83, who had shot dead his sister, Maria, on February 16, 1999, following an argument over burnt toast and a jersey that needed mending. He was sentenced to 10 years in prison.

The house where the first puppy was found, back in 2011, was the place where the murder had occurred.

The police had interrogated Mr Buhagiar over the spate of animal killings and he insisted he was being set up.

I was left tormented by a demon of a woman, neglected by God and tortured with the venom of people’s tongues

The rather lengthy notes are written in a Maltese dialect, with sources confirming that the calligraphy of all four were extremely similar to each other.

The most recent note speaks of the 48 years that have passed since the perpetrator was still a young man, hoping to find a woman who would love and care for him and who would give him children who would look after him.

Instead, the note continued, everything turned out the other way round, with the perpetrator being left tormented (imsallab) by a demon of a woman, neglected by God and tortured with the venom of people’s tongues.

This woman dragged him through hell, the perpetrator lamented, causing him continuous pain.

Whenever he asked her to do something for him, she would purposely do things badly and carelessly to spite him. Her careless work, the note rambled on, meant that his clothes would rip apart when the author was in front of people, providing them an opportunity to make fun of him.

The woman was disgusted by him and even treated him worse than she would an animal, the author wrote.

The self-pitying tone is prevalent in all four notes but the 2011 one reeks of anger and revenge.

It curses Maria, the woman whom the author claimed he loved, yet, who insulted him and abandoned him.

The author curses a doctor named as Joseph Cassar, accusing him of taking his money only to depict him as a stupid and crazy man.

He also damns the police for arresting him, the Attorney General, lawyer Gianella de Marco, whom the author accuses of taking his money but still allowing him to end up in prison, and Judge Joseph Galea Debono for being merciless.

The 2011 note mentions columnist Daphne Caruana Galizia, saying she spewed venom about him in the papers.

He cursed all those who enjoyed his predicament and those who, through their words or actions, made him suffer.

In one of the 2012 notes, the author prayed to St Joseph that the person he engaged to hang the crucified animals would spend the money he paid him on drugs and alcohol.

He hoped that the cross placed upside down would curse his accomplice so that he would not return for the rest of the money the author had promised him in return for hanging the crucified animals.

The author wanted the people to express compassion towards him, hoping that this would lead him to finding a woman who would care for him and pamper him.

He dreamt about getting along with the sister of the sacristan. He would bequeath his wealth to her rather than to his cursed relatives.

If St Joseph granted his wishes, he would restore the saint’s statue rather than that of his namesake, St Francis.

Mr Buhagiar had helped restore the statue of St Philip.

In the second note written in 2012, the author lamented that God still abandoned him to his current misery. If God didn’t pity animals, how could He be expected to pity the author, the note adds.

People were quick to make a big a fuss over an animal, the author writes, but no one felt anything for him. His conclusion therefore was that he was worse than a beast because no one pitied or understood him.

The police yesterday issued new footage taken from three cameras showing the Mosta animal killer. The footage, too distant for the man to be identified, shows him carrying a crucified cat as he walks onto the church parvis and hang  it below the statue of St Philip. Other footage shows him hanging a dog below a lamp post.

Both animals are believed to have been dead when they were nailed to their crosses.

The police called on whoever has any information, regardless of how insignificant it may seem, to contact them  in confidence, on telephone numbers 119, 2122 4001 or 2294 3551 or any other means they deem most convenient.

The police have been carrying out intensive investigations, including searches in several houses and farms. It is understood that footage from two other cameras was recovered after this week's case. 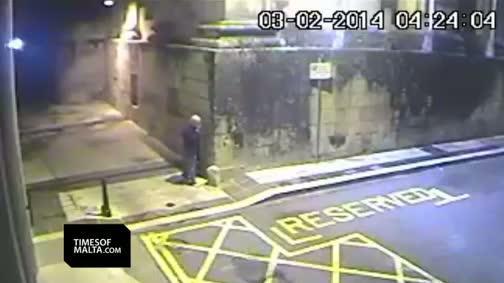 A still shot of the same man from another video camera.