Investigations into the explosion which two days ago left a 35-year-old Qormi haulier fighting for his life are focusing on the possibility that the car bomb attack was linked to his line of business. 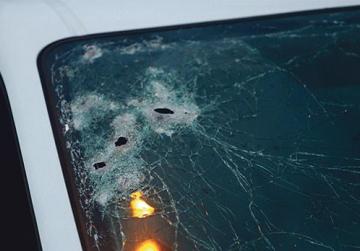 Damage from what sources called an “improvised device” placed under the driver’s seat of Mr Cassar’s van.

Josef Cassar, the sole director of S&T Services Ltd of Marsa, suffered grievous injuries when a bomb was placed underneath the driver’s side of his Ford Transit van. The bomb, which sources described as an “improvised device”, exploded during the afternoon rush hour at about 6.15pm in Aldo Moro Street, Marsa.

Mr Cassar, who is still in intensive care, suffered injuries to both legs and had to undergo urgent surgery on Monday night.

The blast sent the van crashing into a lamp post, injuring a 37-year-old motorist from Żabbar who was driving close by in an Opel Zafira. Fortunately, a 45-year-old man from Naxxar who was a passenger in the van emerged relatively unscathed and suffered only slight injuries.

The victim could have been targeted due to his business activities

Though the possibility of an accidental blast was initially not ruled out, the gaping hole in the vehicle’s floorboard under the driver’s seat left no doubt that Mr Cassar had been targeted.

Police sources told the Times of Malta that the case was being treated as an attempted homicide.  However, they pointed out that the victim, who owns a company specialising in haulage services, customs clearance and warehousing, was not known to the police.

“One possible motive which is not being ruled out at this stage is that the victim could have been targeted due to his business activities,” the sources said.

Monday’s car bomb was the second such attack this year. In January, Martin Cachia, 56, was killed when a bomb destroyed his car while he was driving on the Marsascala bypass. Mr Cachia had a pending court case in connection with human trafficking.