Thousands of protesters demanded justice in the aftermath of Daphne Caruana Galizia's murder and called for the immediate resignation of the Police Commissioner and the Attorney General.

In a statement read out in the end, the protest organisers demanded that a new police chief and AG are elected by a two-thirds parliamentary majority. 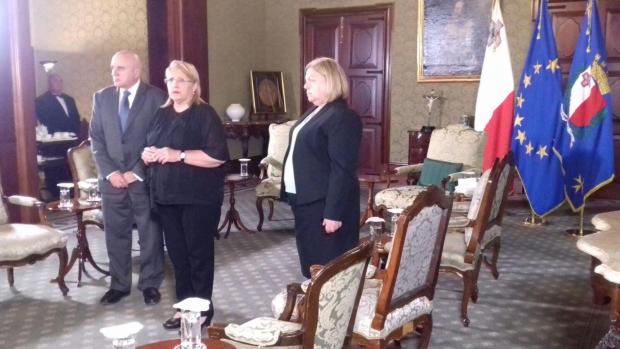 The demands were made by protest co-organiser Michael Briguglio and were then presented to President Marie Louise Coleiro Preca, who was at one point also seen at the demonstration.

She told the organisers at the Palace in Valletta that the murder was a cowardly and obscene attack on Ms Caruana Galizia, her family and the State. It tried to instil fear in the people which had to be overcome with courage.

The President appealed for compassion and solidarity and said the country had to work to strengthen its institutions so that everyone could have peace of mind. The people should have confidence in their institutions and democracy, she said, as she called on the people to do away with partisan politics.

The manifestation, organised by the Civil Society Network, was supported by political parties and also included the participation of MPs from both sides of the House.

Police Commissioner Lawrence Cutajar was at the centre of attacks with participants calling for his resignation. 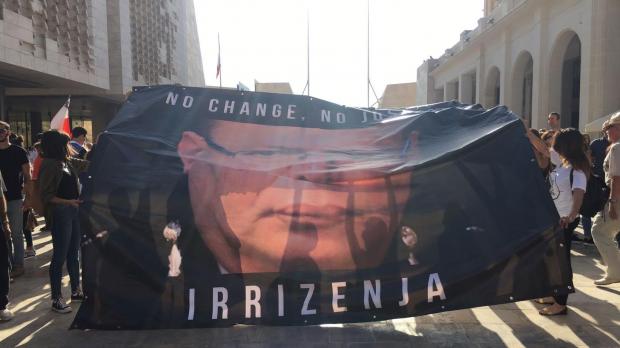 A large banner which read: "No change, No Justice", demanding his resignation was put up at the court gates as participants chanted "pulcinell" (clown).

This banner was later stuck to the police headquarters gate.

The protesters met at City Gate and walked along Republic Street. At the end of the speeches, participants were told to proceed to the police headquarters for a silent march.

In front of the headquarters, they sat down in the middle of the road, unfurled a banner deriding the police chief, and chanted "justice, justice". 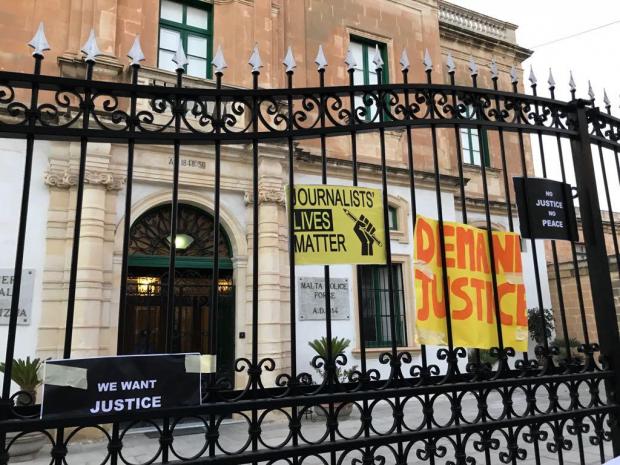 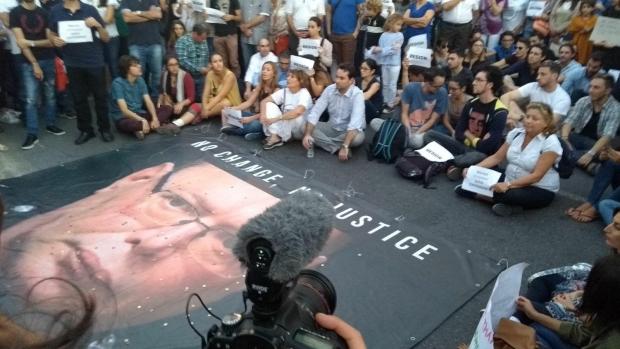 Banners describing Malta a 'mafia state' pulled down... and then put back up 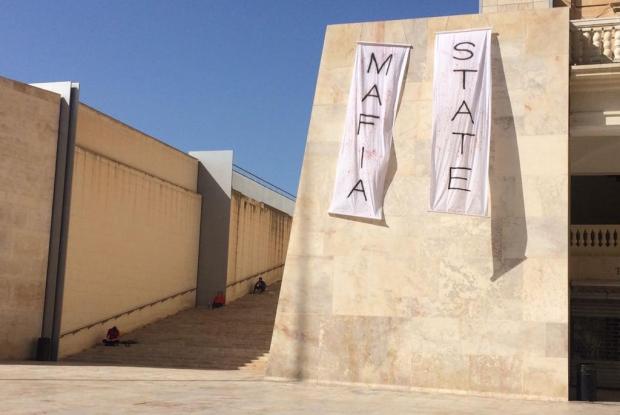 Earlier in the afternoon, two banners hung on City Gate calling Malta a 'mafia state' were removed by the police within half an hour.

The banners were put back in place just before the demonstration started after Times of Malta reported lawyers saying the police action was illegal.

Protestors applauded as soon as the banners were once again in place.

A spokesman for the police said they were "probably removed" because of the wording.

A protestor told Times of Malta that the absence of students from the University vigil reflected a sense of indifference, which was unfortunate because it was their future they need to protect.

Another said it was anger that drove her to Valletta.

The event comes at the end of a week of vigils and silent protests that took place after the journalist's assassination on Monday.

Also taking part were unions and other organisations, including a group of 48 student goups who came together to show they were not afraid to express their opinion, ask for justice for daphne and urge the people not to feel demotivated and give up on hopes of a democracy.

"It shouldn't have had to come to this for us to stand together," they said. 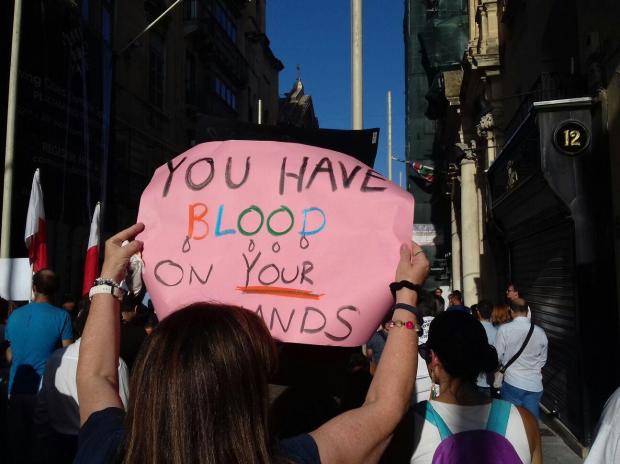 'We will never give up'

The secretary general of Reporters without Borders Christophe Deloire said that what was at stake was the need for journalists to be able to investigate without being killed, without the fear they would disappear.

“We are here to express our solidarity with you. To say with you that the pen conquers fear.”

Daphne’s killers, he said, wanted to silence her and us - “but they will not have more than one minute of silence”.

Europe’s democracies, he said, were at a tipping point. And it was crucial that Europe continued to set an example for press freedom and protection of journalists. 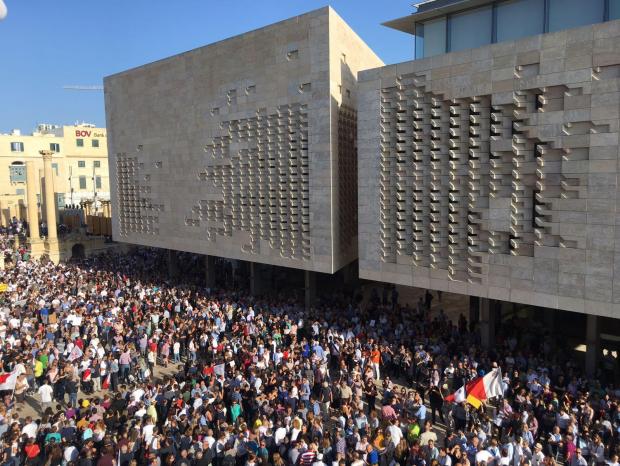 Journalist James Debono said that with Daphne’s murder the country had lost part of its soul. Journalists had to speak truth to power and this should be our motto from now on.

Mr Debono said the country deserved better and the Maltese did not want to be the washing machine of criminals and dictators.

“We need to reflect, we need a political answer to the moral question strangling Malta... Whoever has to leave should leave, today before tomorrow." 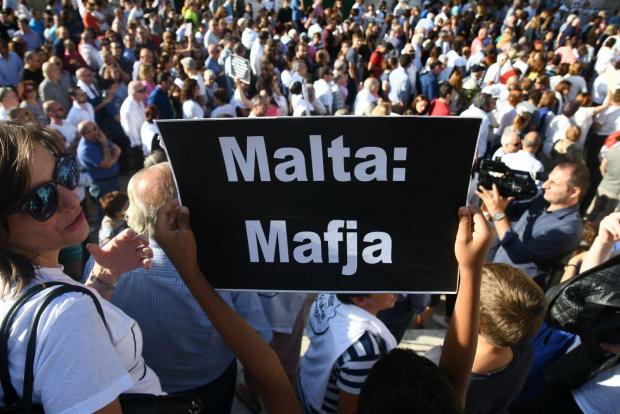 “In your saddest hour, when no one could have blamed you for shutting yourself in, your concern was on Daphne’s work. You are worried her work might stop. That her killers will manage to bury what they want to hide and their dirty secrets remain unknown. Daphne was killed because she alone had uncovered the illness that had weakened the country where greed ruled."

She was faced by despair almost every day of her career but she never let it crush or silence her. And in her despair, she kept hoping until the moment hate killed her.

“This is the example that keeps inspiring us even after she left us...” 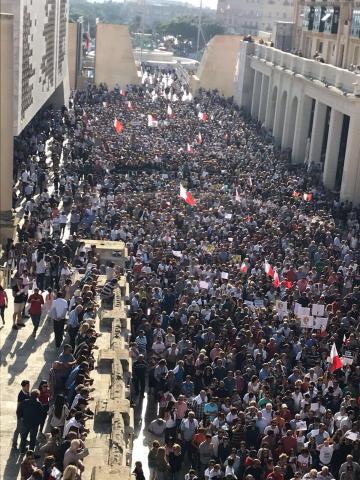 'Country has been taken over by bullies'

“There is fear in the country, there is a surplus of criminality, money laundering and corruption.”

The country, he said, had been taken over by bullies who did whatever they wanted.

“What kind of freedom is it if one is bombed when he dared speak out?”

He accused the Prime Minsiter of ignoring the courts and said this was not a democracy but a 'mafia state'.

Civil society, he said, had a number of requests which it would be presenting to the President. 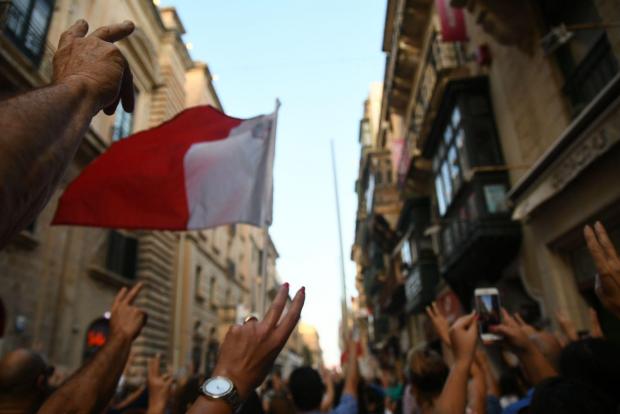 'We all have a voice we should use'

“We all have a voice which we should use to pressure for change. We have a right to a police force we can trust, a Police Commissioner we can respect, an independent Attorney General and judiciary.” 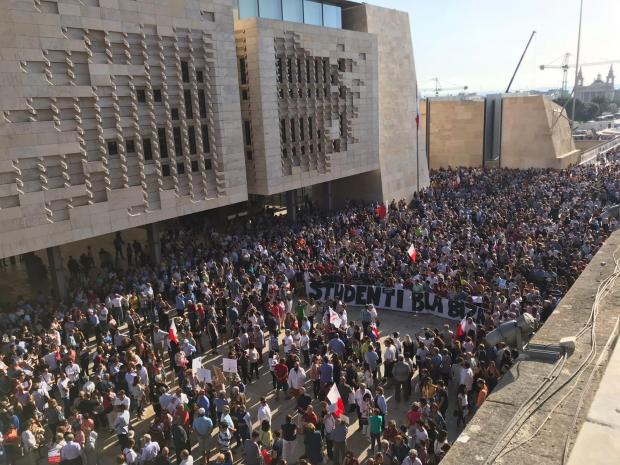 Speaking on behalf of students, Robert Napier students would not be afraid and they would not shut up.

“Our voice will remain strong. We will not be silenced, we will do anything to safeguard our freedoms, let’s be pioneers for this country to find justice,” he said. 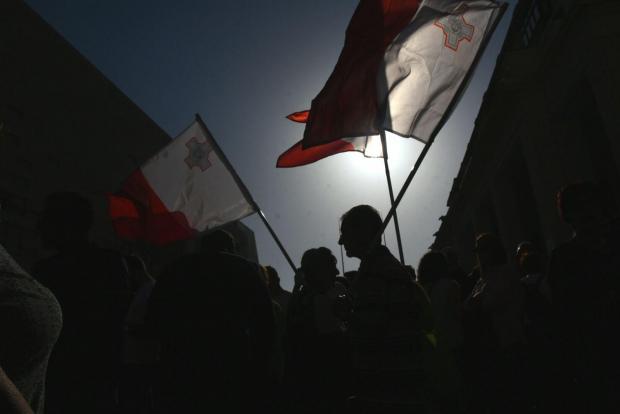 Both Prime Minister Joseph Muscat and Opposition leader Adrian Delia did not take part in the demonstration.

Dr Muscat said earlier his presence would be out of place. Dr Delia had planned to attend but according to reports he had to back out as rebel Nationalist MPs were refusing to walk with him. 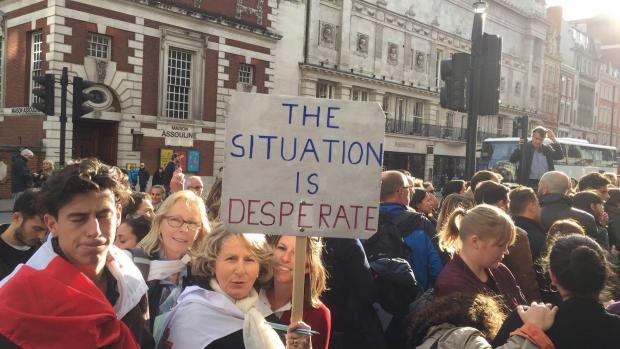 A protest also took place in London where a group of Maltese, some carrying the national colours and flowers fixed images of Ms Caruana Galizia with messages and slogans on the main door of Malta House.
The protest in London