Freebies distributed by politicians become a criminal offence once a general election is called and must be investigated by the police since it goes beyond the remit of the Standards Commissioner, George Hylzer has ruled.

Hyzler was ruling on a complaint filed by independent candidate Arnold Cassola who claimed that MPs Silvio Schembri, Silvio Parnis, Alex Muscat and Rosianne Cutajar distributed food items to voters in their electoral district to influence voters, amounting to an offence under the General Elections Act.

Hyzler informed Cassola such a breach of the law would only take place once an election is called. Notwithstanding this, it was a criminal matter for the police to investigate.

Last week, civil society activists Repubblika asked the police to investigate Cutajar for distributing oranges to residents of a care home in an alleged breach of the General Elections Act.

Cutajar handed out the fruit to residents of Dar Pinto, an elderly home in Qormi, part of her constituency and where she was formerly mayor. The group said the incident breaks the law relating to "treating".

On the same day, Cassola filed a complaint with the commissioner complaining that Cutajar was not the only culprit. Parnis sent roly polies to constituents in September, Schembri had sent cupcakes to mark Mother’s Day while Muscat sent constituents COVID-19 masks with a picture of himself attached to the packaging.

Hyzler observed that the complaint does not appear to constitute a breach of the code of ethics for parliamentary members, but that the allegation was related to a breach of electoral laws.

According to provisions in the law governing elections, the distribution of free food, drinks, or anything else in an attempt to influence their electoral choice is illegal, and people found guilty are liable to a fine of up to €1,160 or a six-month prison term.

Hyzler noted, however, that treating only enters into force before, during or immediately after an election which comes after the dissolution of parliament when a general election is called. 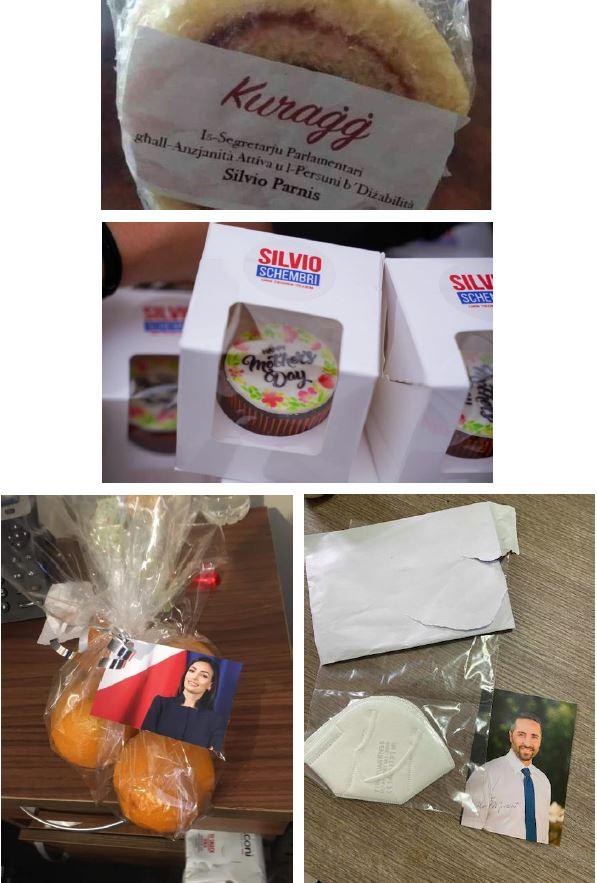 He reiterated his appeal that the Standards Commissioner cannot assume the roles of other authorities. In this case, he said, the allegations fall under the competence of the police, and that his office cannot prejudice police work by investigating the alleged crimes.

With regards to the gifts from Muscat, Hyzler noted that masks do not fall under the items considered by law as constituting “treating”. On Parnis’s roly polies, Hyzler said the complaint had to be filed with 30 days.