Pope Francis condemned the 'sacrilegious war' in Ukraine at the end of an open-air Mass where he appealed for peace in the country invaded by Russia two months ago.

The pope made the comments at the end of a two-hour Mass and ahead of a visit to the Peace Lab in Ħal Far, where he is due to meet migrants and refugees.

"Let us pray for peace, thinking of the humanitarian tragedy of tormented Ukraine, still under bombardment of this sacrilegious war," he said to applause from the 12,000-strong crowd. 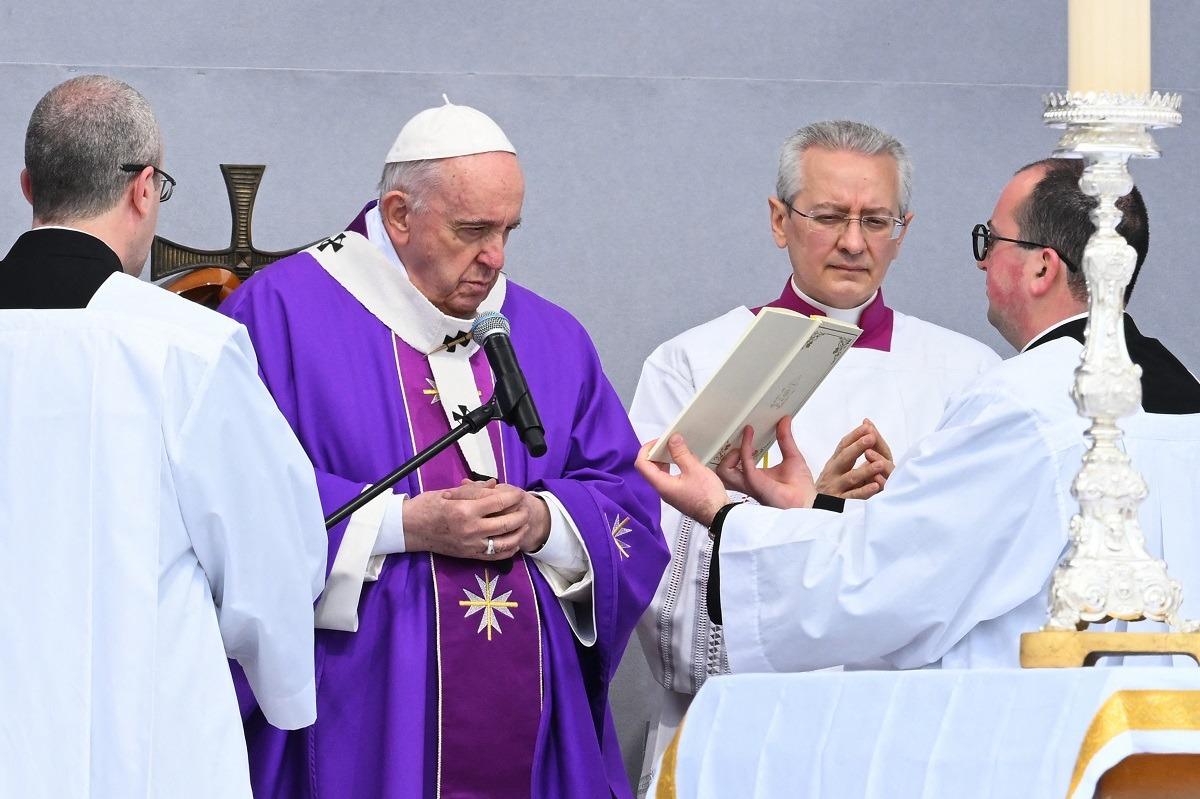 Pope Francis in purple, the colour of Lent. Photo: AFP

He was speaking after a homily that used to urge people not to discard those "despised" by society and to issue a warning against hypocrisy.

Francis, 85, celebrated an open-air Mass at the Granaries in Floriana, thanking the people of Malta for their "warm and affectionate welcome" on the second day of his two-day visit to Malta.

Earlier he had visited the grotto where St Paul was believed to have stayed after arriving in Malta. The Pope recalled the welcome the Apostle received and urged better treatment of modern-day arrivals on the island.

During his homily on Sunday, Francis recalled a Gospel story about a woman caught in adultery to urge people to have mercy and to warn those who presented themselves as God’s defenders not to judge others.

He warned that those accusing the woman of sin were a reflection of all those who prided themselves in being “righteous, observers of God’s law, decent and respectable people”.

“They disregard their own faults, yet they are very concerned about those of others,” Pope Francis said.

In laypeople’s eyes, they are experts in matters of God, however, he warned, they failed to recognise Jesus and actually viewed him as an enemy they wanted to eliminate.

That is why they brought before him someone they scornfully referred to as ‘this woman’, “treating her as a thing, and publicly denouncing her adultery”.

These people, reputedly “devout and religious men” called for the woman to be stoned, he noted.

“These Gospel personages remind us that at any time our individual and communal religiosity can conceal the worm of hypocrisy and the urge to point the finger at others. We can always run the risk of failing to understand Jesus, of having his name on our lips but denying him by the way that we live. Even as we raise banners displaying the cross," he said. 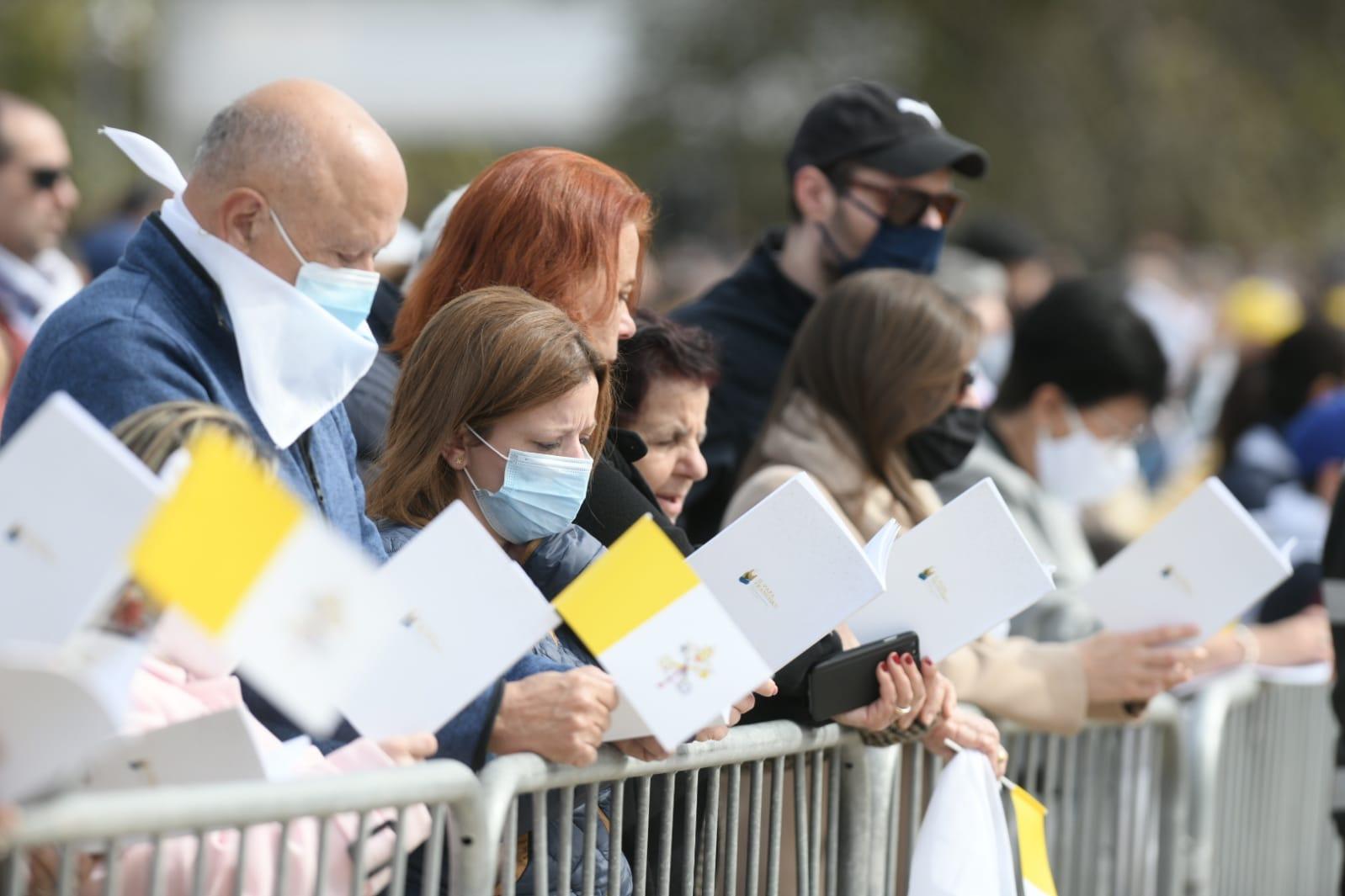 Members of the crowd follow the Mass and hold flags. Photo: Matthew Mirabelli

Commenting on the way people treated their ‘neighbour’, the Pope said this could go two ways: an attitude of mercy or judgment. The latter was in line with how the accusers had behaved.

They presented themselves “as God’s defenders” but failed to realise that they were “trampling on their sisters and brothers”. 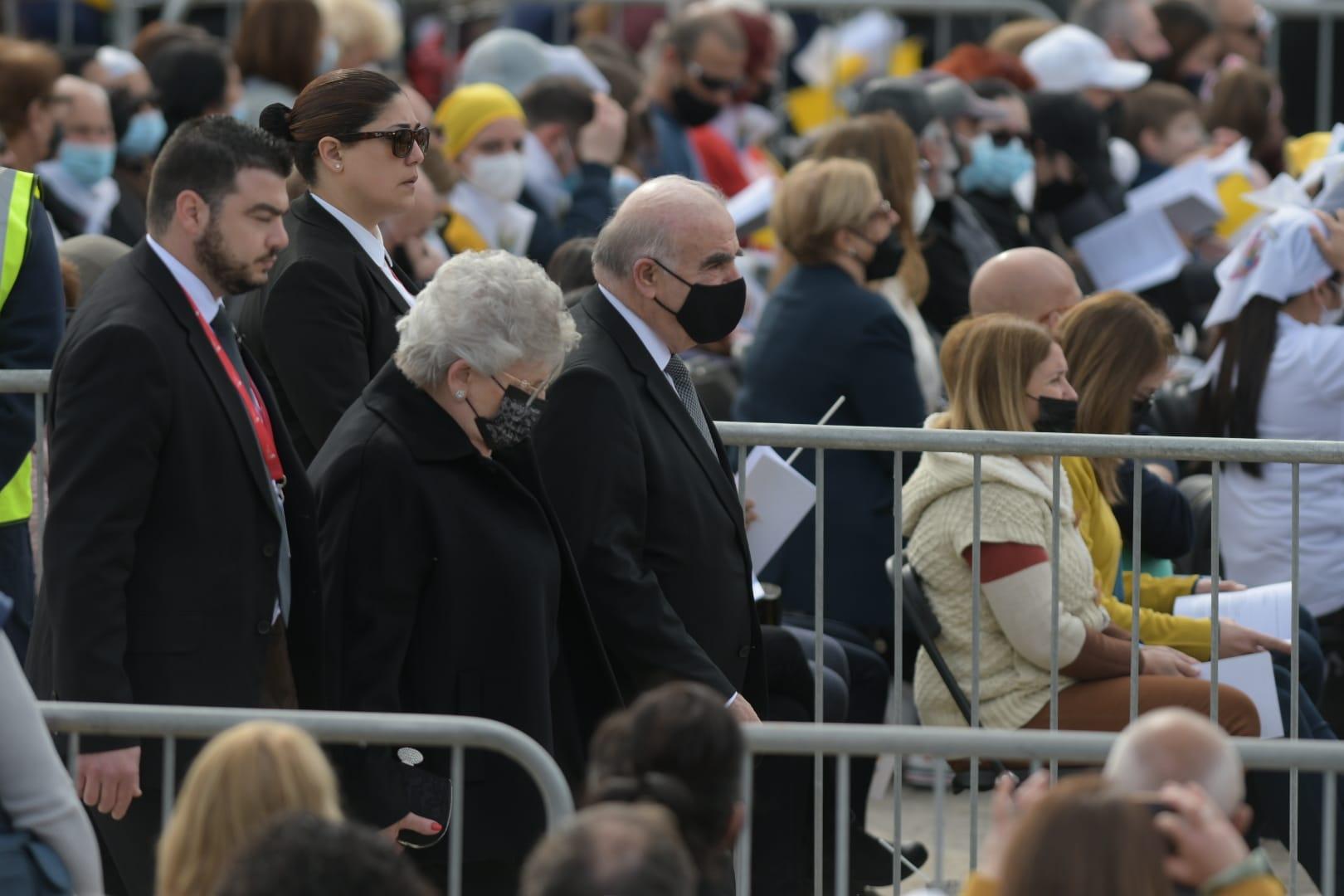 “Those who believe they are upholding the faith by pointing their finger at others may have a certain ‘religiosity’, but they have not embraced the spirit of the Gospel, for they disregard mercy, which is the heart of God.

His homily also had a message of hope and forgiveness when people are treated badly, saying of the woman in the story, “we can even speculate whether, after being forgiven by Jesus, she was able in turn to forgive others."

“Perhaps she even came to see her accusers no longer as harsh and wicked men, but as the means that led to her encounter with Jesus.”

At the end of mass, the Pope thanked the islanders for hosting him and ended his address by praying for peace, specifically referring to the humanitarian tragedy unfolding in war-torn Ukraine.

“May we be tireless in praying and in offering assistance to those who suffer,” he said ahead of reciting the Angelus.

Archbishop Charles Scicluna thanked the Pope for his visit, expressing hope that the event rekindled a sense of charity and unusual kindness in people’s hearts. 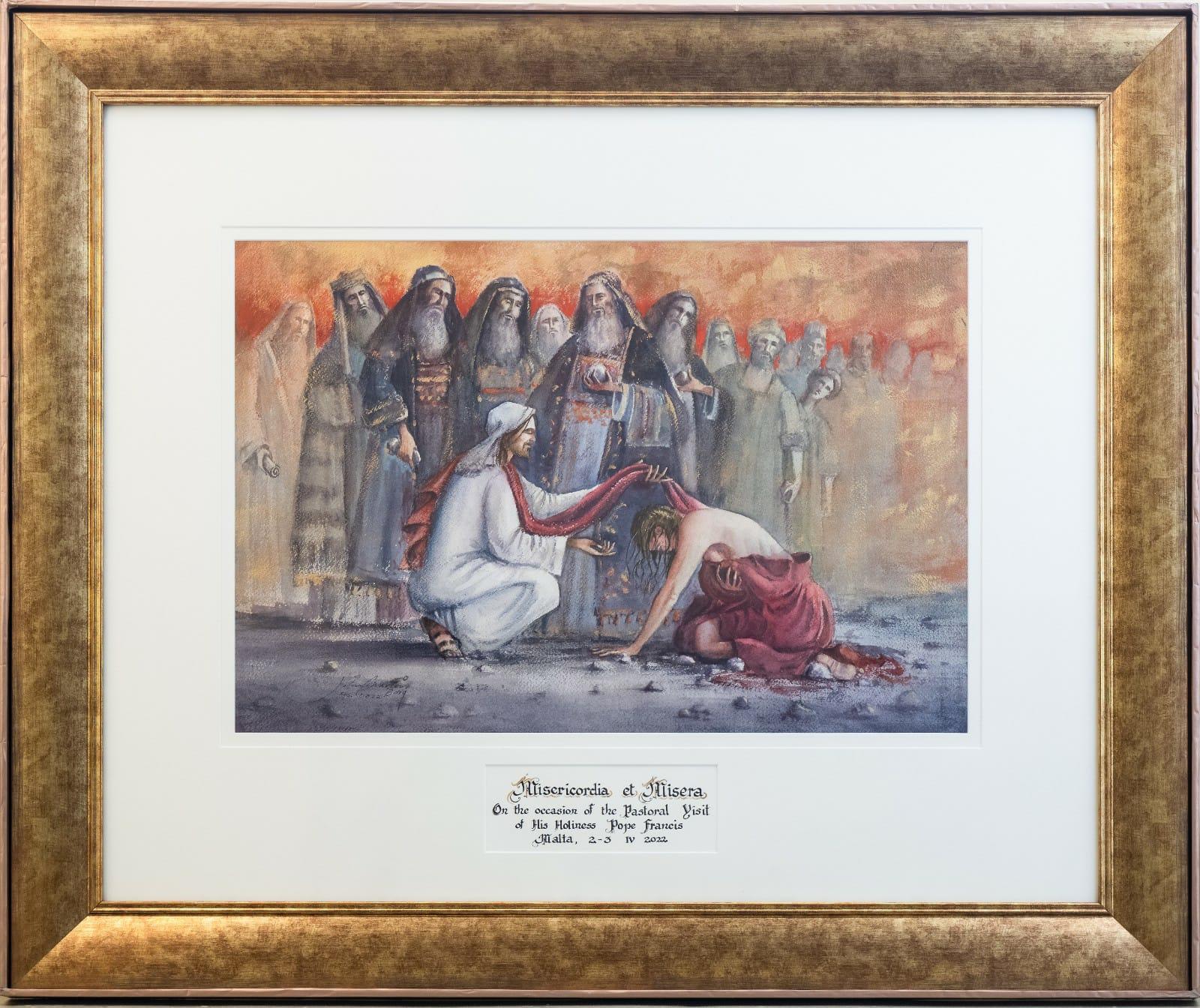 A gift from Archbishop Charles Scicluna to Pope Francis.

He presented the pope with a painting by John Martin Borg depicting the woman mentioned in the gospel, called ‘Misericordia et Misera’.

The painting shows scribes and pharisees preparing to stone the woman, as Jesus constrastingly offers her a cloak.