Pope Francis met and embraced migrants and refugees at the Ħal Far Peace Lab on Sunday after listening to their experiences of survival as he ends his two-day visit to Malta.

In his address, the 85-year-old pope went off script to warn that the human rights of migrants were being violated, at times with the complicity of the authorities.

The pontiff has made solidarity with asylum seekers a focus of his papacy and linked Malta's Biblical history to the plight of people crossing the Mediterranean in search of safety.

Before he spoke to around 200 people and residents of the Ħal Far centre,  two migrants appeared on the platform with him to share their testimonies of crossing the Mediterranean and their treatment in Malta on arrival.

Daniel Jude Oukeguale, from Nigeria, described leaving his hometown five years ago and travelling 13 days to Libya, where he was abused by smugglers and handed over to a detention centre.

"Some people lost their lives, some lost their senses," he said, describing a journey that took him several attempts before he eventually reached Malta.

He spoke about how his initial joy on arriving on the island turned to despair after being locked away.

"It was all smiles when the Maltese coastguard rescued us," he said. "Tears of joy flowed freely. My dreams came true! But these were short-lived since we were put in detention for six months the same night we landed. I almost lost my mind. Most nights I asked God: why?" 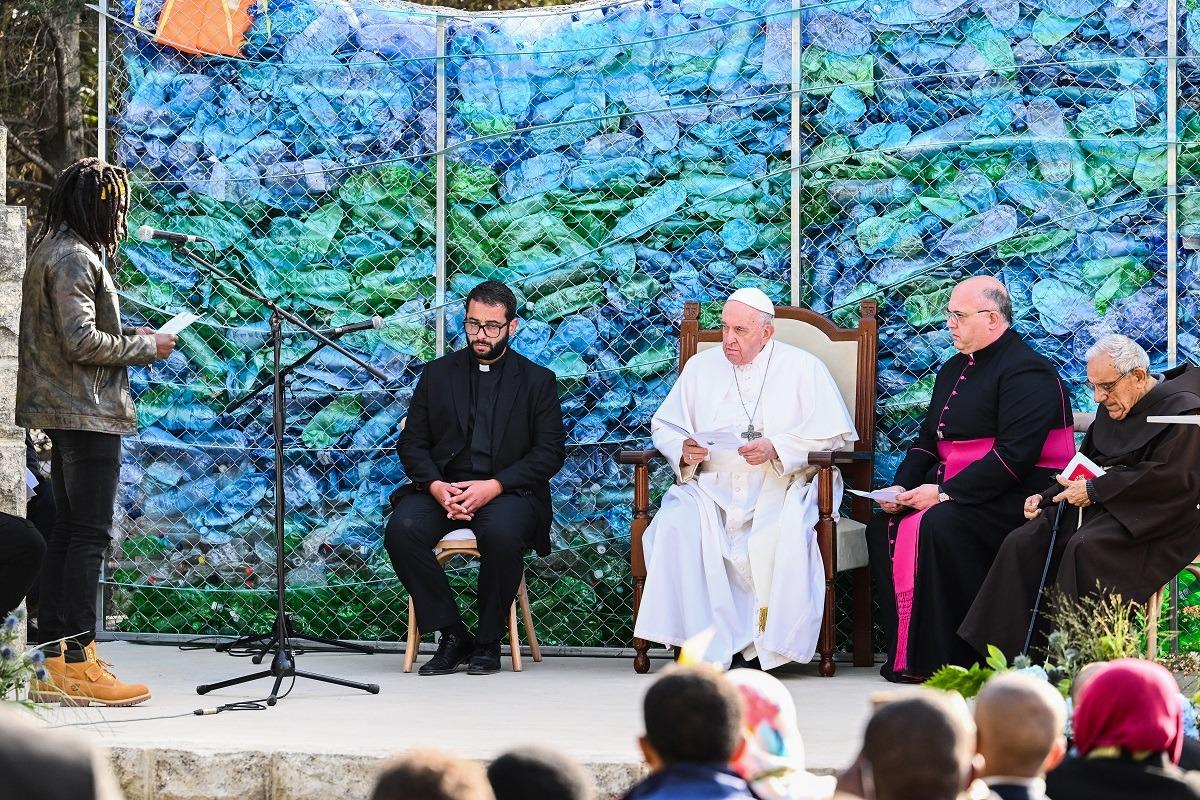 Daniel Jude Oukeguale describes his journey across the Mediterranean as Pope Francis looks on. Photo: AFP

The second person to share his story, expectant father Siriman Coulibaly, thanked Pope Francis for coming to a "place of invisibility".

Siriman, who has been in Malta for four years, told Francis that there are people whose asylum claims have been rejected and yet it is dangerous for them to return to their home country.

They end up in limbo, with little or no rights at all, he said.

"These are not just stories and numbers, but they are us, people in flesh and blood, some with broken dreams, others who have managed to achieve them."

Among those waiting to see Francis at the centre was Amara, one of three teenagers fighting controversial terrorism charges in Malta's courts, after being accused of hijacking a ship called the El-Hiblu in 2019.

The 18-year-old told Times of Malta he hoped to speak to the pope to highlight his case and show he was a "victim of injustice".

He later met the pope and handed him a copy of a book produced to raise awareness of the case.

Others gave Francis a life jacket, as a symbol of the risks that they take when crossing to Europe.

Another person in the crowd was Lamin Jaiteh, whose alleged treatment at the hands of his employer shocked the country when the Gambian fell from a construction site and was abandoned on the side of the road. 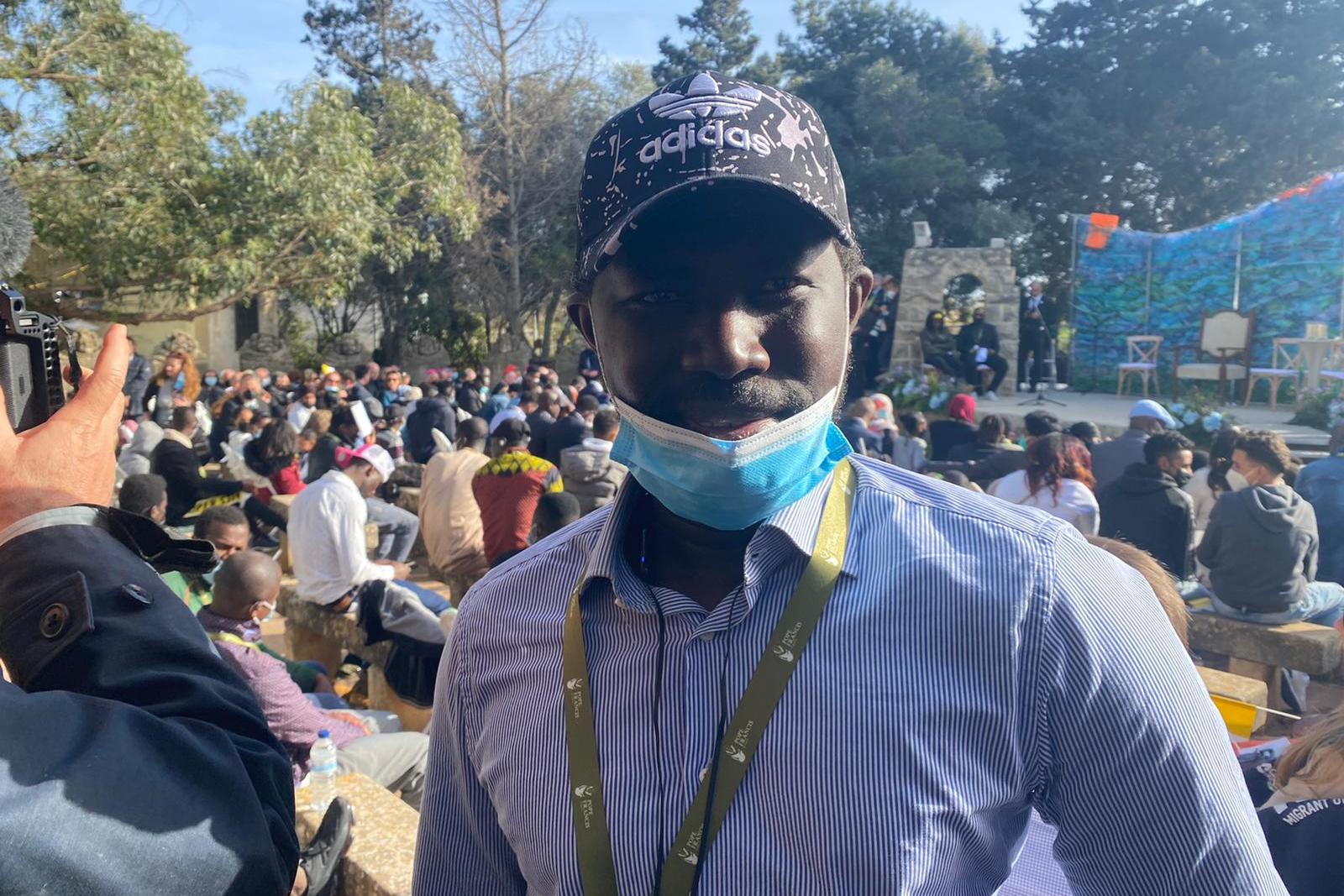 Lamin Jaiteh waits for Pope Francis along with hundreds of other migrants and refugees. Photo: Mark Laurence Zammit

The pope's visit to the Peace Lab followed a full morning that started with prayers at St Paul's Grotto in Rabat and ended with Mass for the masses on the Granaries in Floriana.

At the grotto, the pontiff brought up the issue of migration recalling how, 2,000 years ago, the Maltese had treated the shipwrecked people with humanity, recognising they were in need of shelter, security and assistance.

“No one knew their names, their place of birth or their social status - they knew only one thing: that these were people in need of help," he said.

And in his homily during Mass he urged people not to discard those "despised" by society and issued a warning against hypocrisy.

“Those who believe they are upholding the faith by pointing their finger at others may have a certain ‘religiosity’, but they have not embraced the spirit of the Gospel, for they disregard mercy, which is the heart of God," the pope said.

Francis arrived in Malta on Saturday. In his first address to the country, he spoke of Malta's hospitality and urged it to fight corruption and land speculation. The pope was speaking from the Palace in Valletta.

Later on Saturday, he went to Gozo where he was welcomed by thousands of people as he arrived by catamaran on the sister island.

He is set to leave Malta on an Air Malta flight on Sunday evening.