After touching the lives of readers across the globe, the colourful children’s picture book about the life and work of the late journalist Daphne Caruana Galizia has now been translated into Maltese.

Gattaldo, a Maltese-born author and illustrator, found the murder of his friend Daphne challenging and decided to celebrate her life through what he does best – illustration and storytelling.

Published two years ago, Fearless – The Story of Daphne Caruana Galizia tries to inspire children to fight for what is right.

Through quirky watercolour illustrations and short sentences, the reader watches Daphne grow up in Malta, her love for the written word flourishing.

While the English edition has been praised by readers in Europe and the United States, for the London-based illustrator, the recent Maltese translation of his story brings him greater satisfaction.

“Having the book translated into Maltese not only means it will reach more people, but it makes me proud to know it’s in my mother language,” Gattaldo told Times of Malta.

“It’s important this work is translated into Maltese. Malta, like other nations, needs this message of hope and it needs to speak its language.”

Translated by author Immanuel Mifsud, the book has been published just in time for the upcoming Malta Book Festival, taking place between November 23 and 27 at the MFCC in Ta’ Qali.

Gattaldo said living away from Malta for over 30 years has had a “detrimental effect” on his fluency in the language but that he was honoured to work with Mifsud on the translation of the book.

“Thankfully, publisher Klabb Kotba Maltin tasked a writer I have great admiration for to translate the book,” he said.

“Not many people know that Mifsud was a childhood friend of mine, and we frequented the same secondary school in Rabat.”

Gattaldo was also the brains behind this year’s poster for the festival. He illustrated it around the theme of visual storytelling.

He is one of the international guests who will take part in a number of events, illustration workshops and panel discussions throughout the festival.

A book signing for Il-Ġurnalista, l-istorja ta’ Daphne Caruana Galizia will give readers the opportunity to meet him. 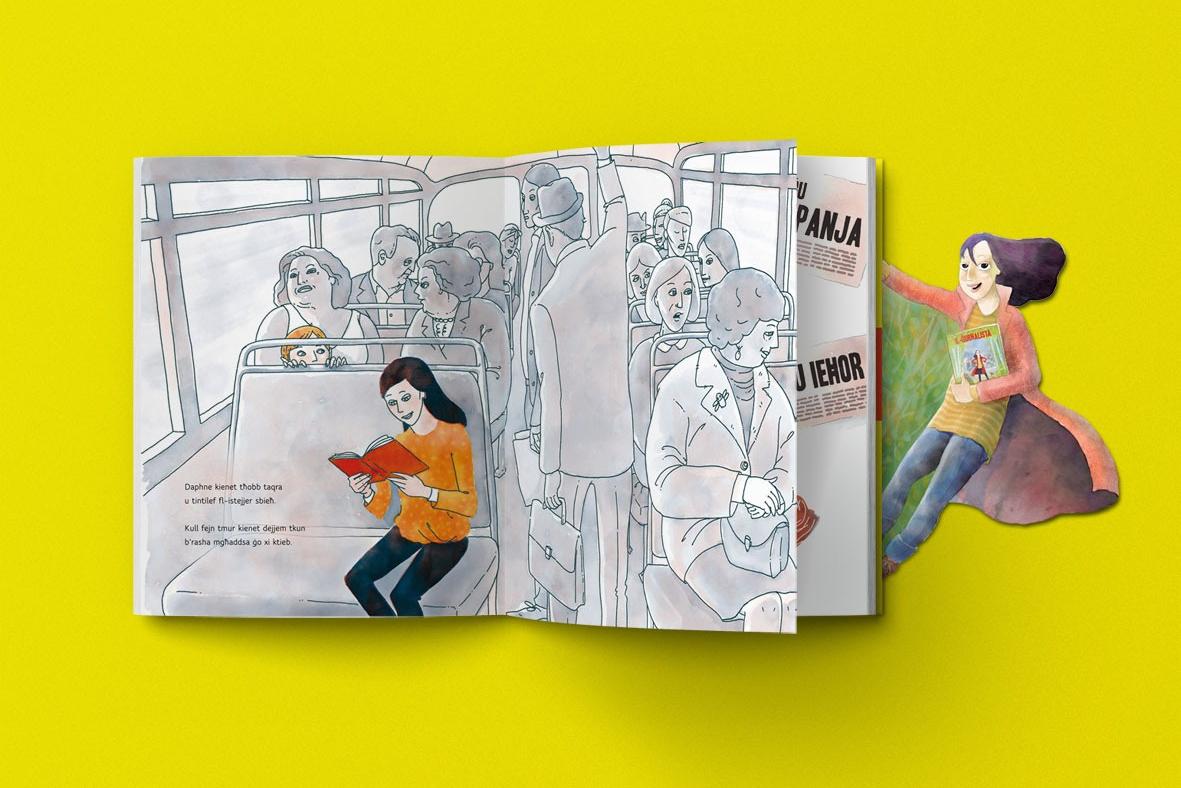 While his book was designed to appeal to young readers, Gattaldo says readers of different ages and backgrounds have been influenced by Fearless.

He recalled how one lecturer from a UK university thanked him for helping him win recognition from his institution in the form of a grant.

“He told me he had used the book as a case study for his journalism class,” Gattaldo said.

“His students were Chinese women in their 20s studying in the UK. I had got similar feedback from a Scottish TEFL teacher whose

Korean student had seemingly lapped the book up and wanted to know more about the story after her teacher read it to her.”

He came across a Twitter thread between educators, where British children’s author Michael Rosen recommended using Fearless in classrooms “to inspire social and societal change”.

“These types of interactions and feedback bring satisfaction to an old fool such as myself who suffers terribly from imposter syndrome,” he said.

“But the most telling comments come from the book’s young readers themselves. Occasionally, I get the opportunity to speak to children and their comments never cease to take me by surprise.”

He said one British nine-year-old reflected how “the evil people who killed Daphne thought she was never going to be heard again, but my friend (referring to Gattaldo) now wrote a book about her life”.

Another 11-year-old’s feedback was more “naunced”. “She commented on the fact that books were important to the young Daphne and helped her think for herself, then made the correlation with Fearless to say it was an important book that informs us of Daphne’s story, thereby getting us to think for ourselves.”

As a children’s book, Fearless has limitations in terms of information – Gattaldo decided not to write about the assassination.

Yet, it has pushed people to read more about the murder, he said.

“The knowledge that Daphne Caruana Galizia’s story is travelling all around the world gives me great satisfaction as my aim is that the story inspires as many children as possible,” he said.