A 1970 lecture about pornography which outraged its University of Malta audience and caused a furore within Maltese intelligentsia is to be published in book form for the first time.

Anthony Burgess, best known for his seminal novel A Clockwork Orange, was reportedly moved to give the speech after Maltese censors confiscated many of his books as he sought to move his library to Malta.

"He struck up a correspondence with the post office asking for the books to be returned, and they said they would let him know as soon as they had read them," Manchester Metropolitan University professor Andrew Biswell told The Guardian. 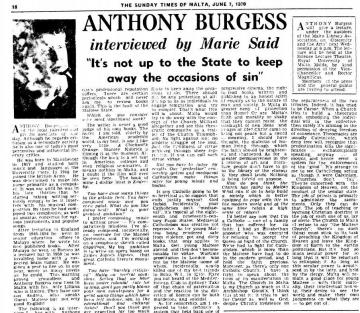 Mr Burgess used the lecture, which was delivered to a packed audience of some 1,000 people, to argue that obscenity and pornography should be judged according to artistic merit.

The author infuriated conservative audience members by arguing that literary censorship was a slippery slope and that banning books set back human progress.

It was a point he had already hinted at in an interview published in The Sunday Times of Malta three days prior, in which he dismissed arguments in favour of local censorship.

"Is Malta in greater need of protection than Rome? Or are Malta's faith and morality so shaky that they cannot resist the onslaught of new ideas?" he asked Marie Said in the June 3, 1970 piece.

Mr Burgess also expressed little patience for the Maltese diocese of the time, saying the Church "tries to act for Caesar as well as God" and that as long as it held secular power "Malta will remain a good place for young Maltese....to get out of."

The interview would prove to be the beginning of the end of Mr Burgess' sojourn in Malta. In his autobiography, the Lancashire-born writer recalled how, at the end of his University of Malta lecture, "a fat Franciscan made a throat-cutting gesture."

At the end of his University of Malta lecture, a fat Franciscan made a throat-cutting gesture

The satirical writer would subsequently fall foul of Dom Mintoff's 1971 Labour government, which sought to requisition empty houses in an attempt to make up for housing shortages.

When Mr Burgess and his family went on holiday to Italy, local authorities pounced and seized his Lija house.

"This is a totally vindictive act — a naked confrontation between the state and the individual," the author told the press from Rome, as he blamed the heavy-handedness on the "influence of the Arabs and the Chinese on the present [Maltese] regime."

An outraged Mr Burgess never returned to Malta, though he subsequently fictionalised his time on the island - and struggles with its conservatism - in his saga Earthly Powers.

It would be another 40 years before local artistic censorship laws were overhauled, with laws first tweaked in 2012 before being completely revised in 2016.

Mr Burgess' lecture will be published in a book titled Obscenity and the Arts, which will also include an essay Mr Burgess wrote about his time in Malta as well as a response to his lecture by academic Germaine Greer.