Portmann Capital Management Ltd, the Maltese company allegedly involved in money laundering on behalf of Venezuelan President Nicolás Maduro, has already informed the Malta Financial Services Authority that it was the unnamed company being referred to in the international media reports on the case.

Sources said the company claimed that it had learnt of the alleged racket from media reports.

According to a criminal complaint filed in the courts of Miami by the US Department of Homeland Security last week, staggering sums of money were syphoned from the country’s State oil company, Petroleos de Venezuela, in a complex money-laundering scheme. 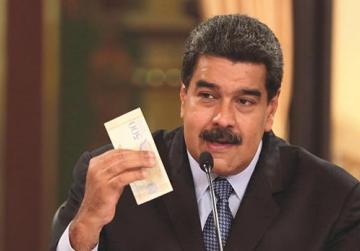 Venezuela’s President Nicolás Maduro holds a bank note from the new Venezuelan currency bolivar soberano as he speaks during a meeting with ministers in Caracas. Photo: Reuters

Some of the names being mentioned in the court documents were “familiar” to the company. Among those clients is José Vincenete Amparan Croquer, a Venezuelan lawyer who is mentioned repeatedly in the criminal complaint.

According to the criminal complaint, Mr Croquer, known as ‘Chente’, is a Venezuelan national believed to be a “professional money launderer”.

An affidavit submitted by a Homeland Security agent details how Mr Croquer is associated with a number of conspirators and a money laundering front operating as a real estate investment firm. According to the criminal complaint, he also had a relationship with the private investment firm in Malta, which he allegedly used to launder large sums of money.

A number of other unnamed parties, referred to as conspirators five, six, and seven, in the court documents, have also been identified as clients by the Maltese firm.

A shell company called Eaton Capital, mentioned in the US court, was also linked to the Portmann firm, located in Sliema. (Not to be confused with Portman International, an accountancy firm based in Floriana).

The Hong Kong shell company Eaton is believed to be involved in the complex money laundering set-up that was investigated by US Federal agents.

Meanwhile, sources said the Maltese firm had informed the Maltese authorities that it had carried out a review of the suspicious clients’ files, and anyone believed to be involved in the matter had their accounts flagged and frozen last week.

Sources said the firm had also told the authorities that sums of money moved around in wire transfers had also been identified.

The sources said the company was insisting it had not been involved in or assisted in any bogus investment structures. Nor, it claims, was it ever aware of President Maduro’s stepsons.

The firm also denies any inference that it had accepted a €20 million bribe for its alleged part in the scam.

The firm is to be slapped with a staggering €350,000 fine for a series of irregularities

Meanwhile, local investigators raised concerns about the investment firm’s claim that it had never had any clients linked to the Venezuelan oil company. The sources said this did not tally with other findings, especially as the company had also admitted that a Venezuelan lawyer – mentioned repeatedly in the US criminal complaint, was in fact a Portmann client and had also provided legal services to the State oil company.

Sources told this newspaper that the Financial Intelligence Analysis Unit had already probed the Malta-based firm several months ago, uncovering a slew of breaches and irregularities.

In a letter sent to the firm in April, the anti-money laundering unit told Portmann it had found breaches related to customer due diligence. These were linked to shortcomings in identifying the ownership and control structures of the firm’s clients, certification on documents, flaws with translations, monitoring of politically- exposed persons and not complying with a previous FIAU order.

The firm was also told that its risk assessment and management procedures were not up to scratch and there were issues with the company’s money laundering reporting officer.

This newspaper is also informed that the firm is to be slapped with a staggering €350,000 fine by the unit, for a series of irregularities. Veteran investigators said the figure was “unprecedented” and such a large fine had never been issued against a financial services company in Malta before.

On the MFSA’s radar

It turns out that the firm in question had even been identified for breaches way before news of the Venezuela scam broke.   Sources within the MFSA said that it had discovered how the firm had administered more than $550 million in transactions without the necessary licensing over several years.

The authority slapped the firm with a €62,000 fine earlier this year.

“This decision was based on extensive volumes of payment transactions executed by the company, for its clients, without any licence to offer this service,” a source said.

The source added that the irregularities occurred over a lengthy period between 2012 and the summer of 2016, covering more than 700 transactions.

“The situation was that we were on to them. But you also have to keep in mind, that these money laundering structures are very complex. We are talking about chasing shadows here,” the source said.

“While I appreciate the media’s interest in such cases, it is not prudent for me to comment at such a stage given the intricacies of the case in question,” he said.

He said the MFSA was working closely with the FIAU, as well as local and foreign law enforcement agencies to establish the facts of the case. “Please understand that the nature of our work involves the collection of intelligence from multiple sources and even though certain companies could be on our radar for various reasons, we proceed with enforcement action following due process,” he said.

Following the US court action, the Maltese authorities have also corresponded with the bank, urging it to halt all transactions from all its clients.

The authorities have also asked for a statement of assets and funds the firm holds. The firm has also been directed to cease taking on new clients. Senior police sources said the firm was a “subject of interest” but declined to discuss the matter any further. The same was true when one official at the FIAU was contacted.

The only Maltese national who appeared to be involved in the firm is a certain Vincent Camilleri. Formerly the company’s money laundering reporting officer, Mr Camilleri is today a member of the board. The other members are the Portmann brothers, who are believed to live in Switzerland.

The company is not believed to have any employees.

How the racket worked

The federal probe, called Operation Money Flight, was initially focused on the defendants’ efforts to launder part of a $78 million nest egg. That investigation, however, uncovered a much broader crime.

The alleged conspiracy began in December 2014 with a currency-exchange scheme to embezzle $600 million from Petroleos de Venezuela obtained through bribes and fraud, according to the court documents.

The defendants then allegedly used an associate, who would later become a confidential source for US investigators, to launder a portion of the funds.

By May of 2015, the conspiracy had doubled to $1.2 billion embezzled from Venezuela’s national oil company.

The eight defendants named in the complaint are accused of embezzling funds from Venezuela’s vast oil income and exploiting its foreign-currency exchange system: the defendants used their access to the Venezuelan government’s foreign-currency exchange system, which offers a far more favourable rate than the everyday market, to convert bolivars to dollars and euros for overseas investments in Florida, Europe and other parts of the world.