Joe Zammit Ciantar goes on a virtual tour of St Paul’s Cathedral, in London, the dome of which features eight panels depicting episodes from the saint’s conversion to his shipwreck on the Maltese islands.

Although there is nothing written in black and white, there is a traditional impression that the apostle of the Gentiles Paul is associated with the Church of England. This is perhaps because the Anglican Church cathedral in London is dedicated to St Paul. 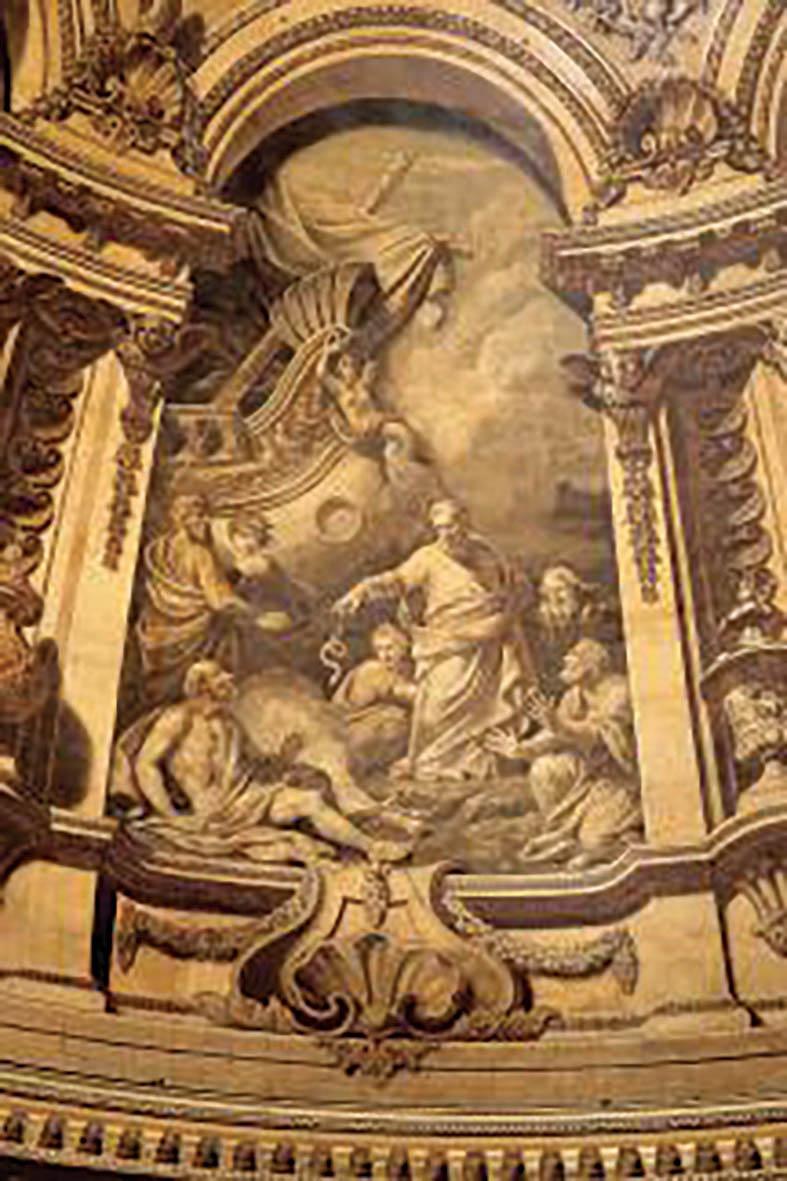 For over three centuries, the stunning English Baroque cathedral has stood on the highest ground – Ludgate Hill – in London, England, hosting national events, funerals and traditions and preserving memorials and tombs of Admiral Lord Nelson, the Duke of Wellington and Sir Christopher Wren, among others.

Built with Portland stone between 1675 and 1711, after the English Reformation – when King Henry VIII removed the Church of England from the jurisdiction of the Pope – this cathedral is the masterpiece of Britain’s most renowned architect, Sir Christopher Wren [1632-1723]. It replaces the ruins of a previous Gothic cathedral destroyed by the Great Fire of London between September 2 and 6, 1666.

It is presumed that on the site of the present and previous medieval constructions, earlier, in the seventh century, stood what might have been the first Anglo-Saxon cathedral built by Aethelberht, king of Kent and dedicated to St Paul. This building – or perhaps a successor – was destroyed by fire in 962. It was rebuilt and burnt down again in the fire of 1087. 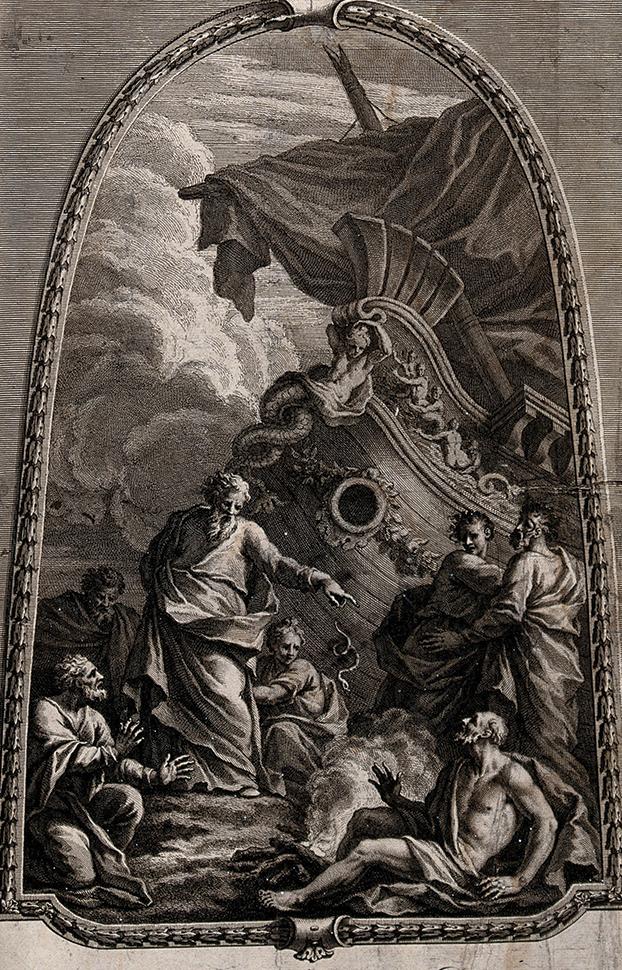 The rebuilding of ‘Old St Paul’s’ started soon after by the Normans. However, still another fire obstructed the progress in 1135 and it was not before 1240 that the eventual building with a Gothic wooden ribbed vault, with pointed arches and larger windows, was finished and consecrated. In 1256, it was enlarged and eventually re-consecrated in 1300.

A dome for the cathedral

In 1666, before the fire destroyed the cathedral, the idea of building a dome to replace its dilapidated tower as proposed by Wren had already been accepted.

After the Great Fire, Wren was commissioned to build the present St Paul’s – the second largest church in Britain, with a dome proclaimed as one of the finest in the world. 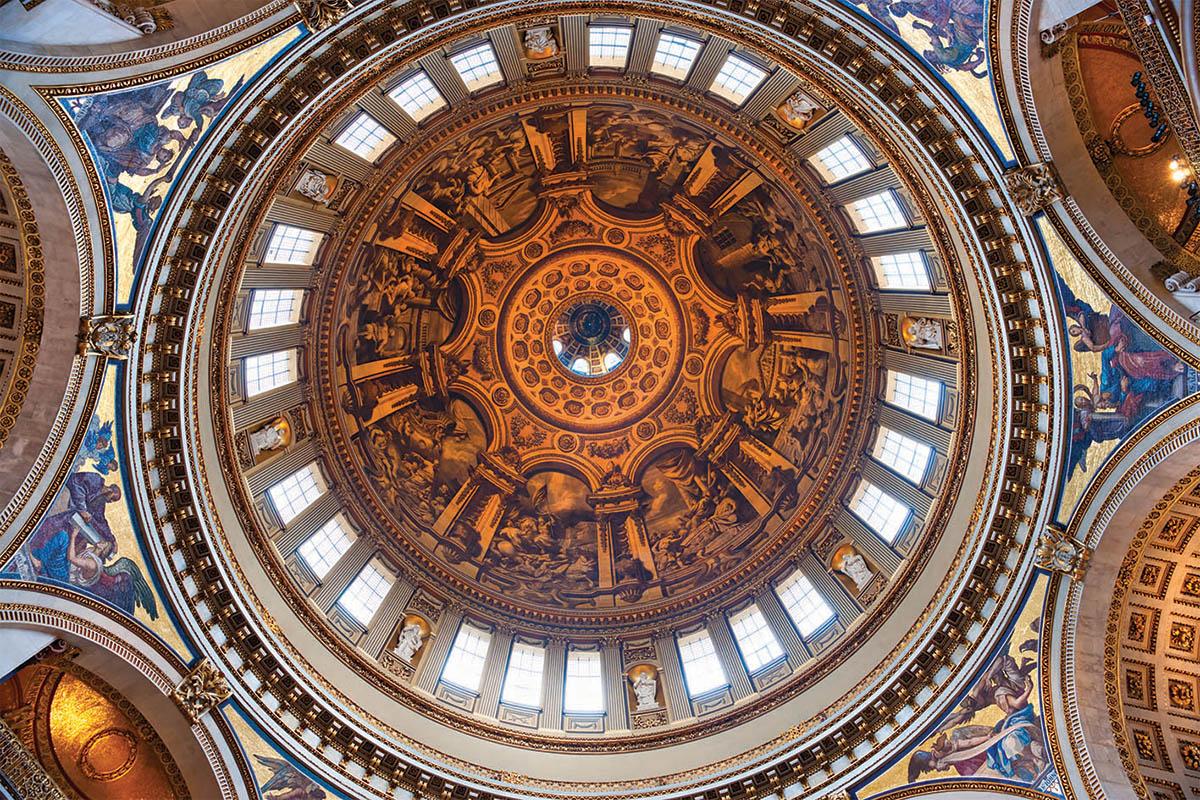 The cathedral is built in the form of a Latin cross and the dome – 111.3 metres high and one of the largest in the world – crowns the intersection of its arms.

It has a three-dome structure: the decorated interior, a middle construction built of brick and the exterior, from around which one can have panoramic views of London, including the River Thames, the Tate Modern and the Globe. The interior is divided in three tiers. In the lower one there is a set of 24 high windows all round, with a niche between every three; in the niches, eight colossal sculptures of the Fathers of the Church, designed by C. E. Kempe, were placed in 1892.

Between the lantern on top and the windows below, there is the main section of the dome – the middle tier – which had been embellished by a set of eight religious historical monochrome paintings depicting well-known episodes from the life of St Paul. These were executed with stone-like colours, between 1715 and 1719, by British court painter Sir James Thornhill [1673-1734]. 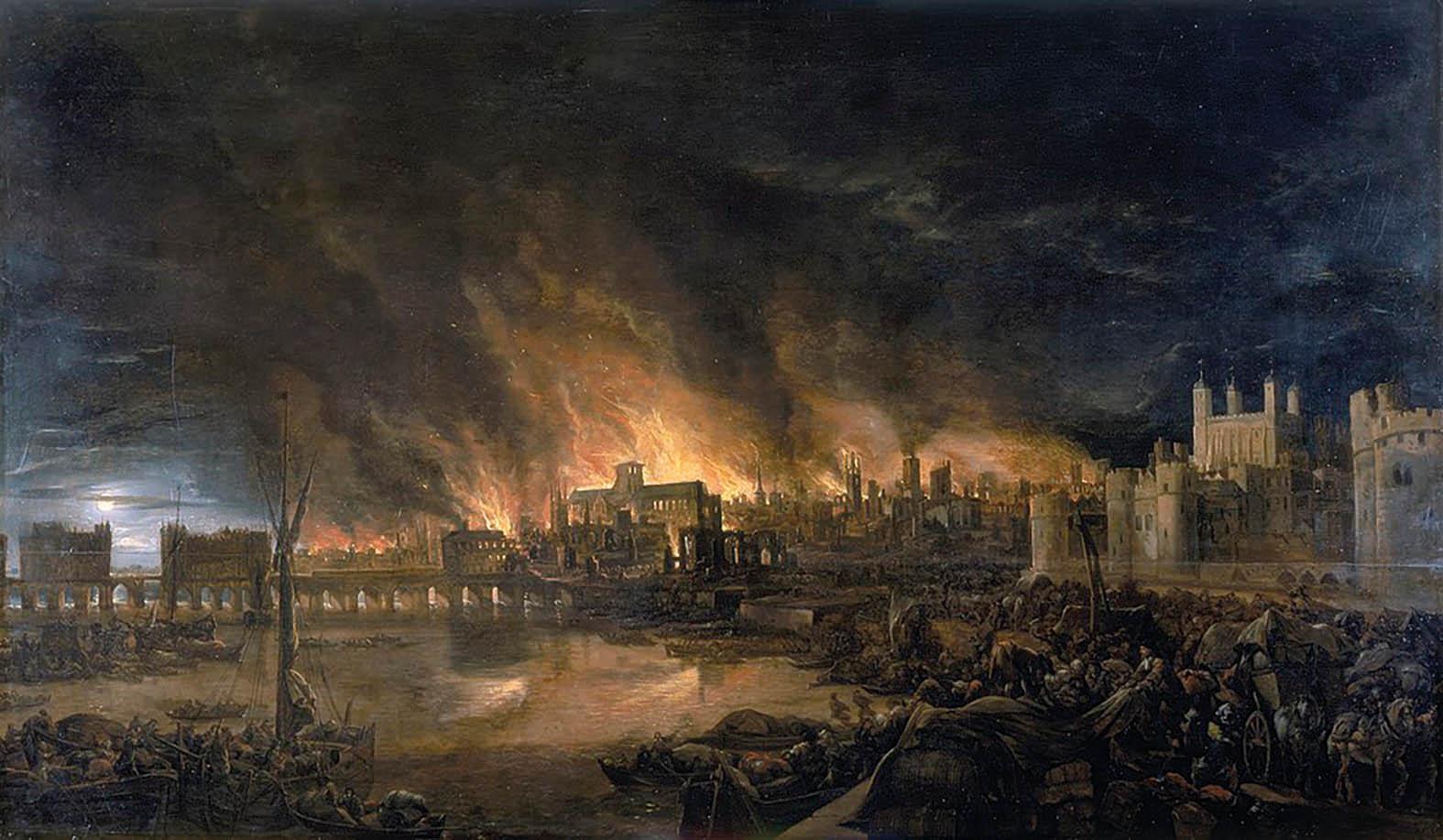 The Great Fire of London depicted by an unknown painter (1675) with Old St Paul’s in the centre. 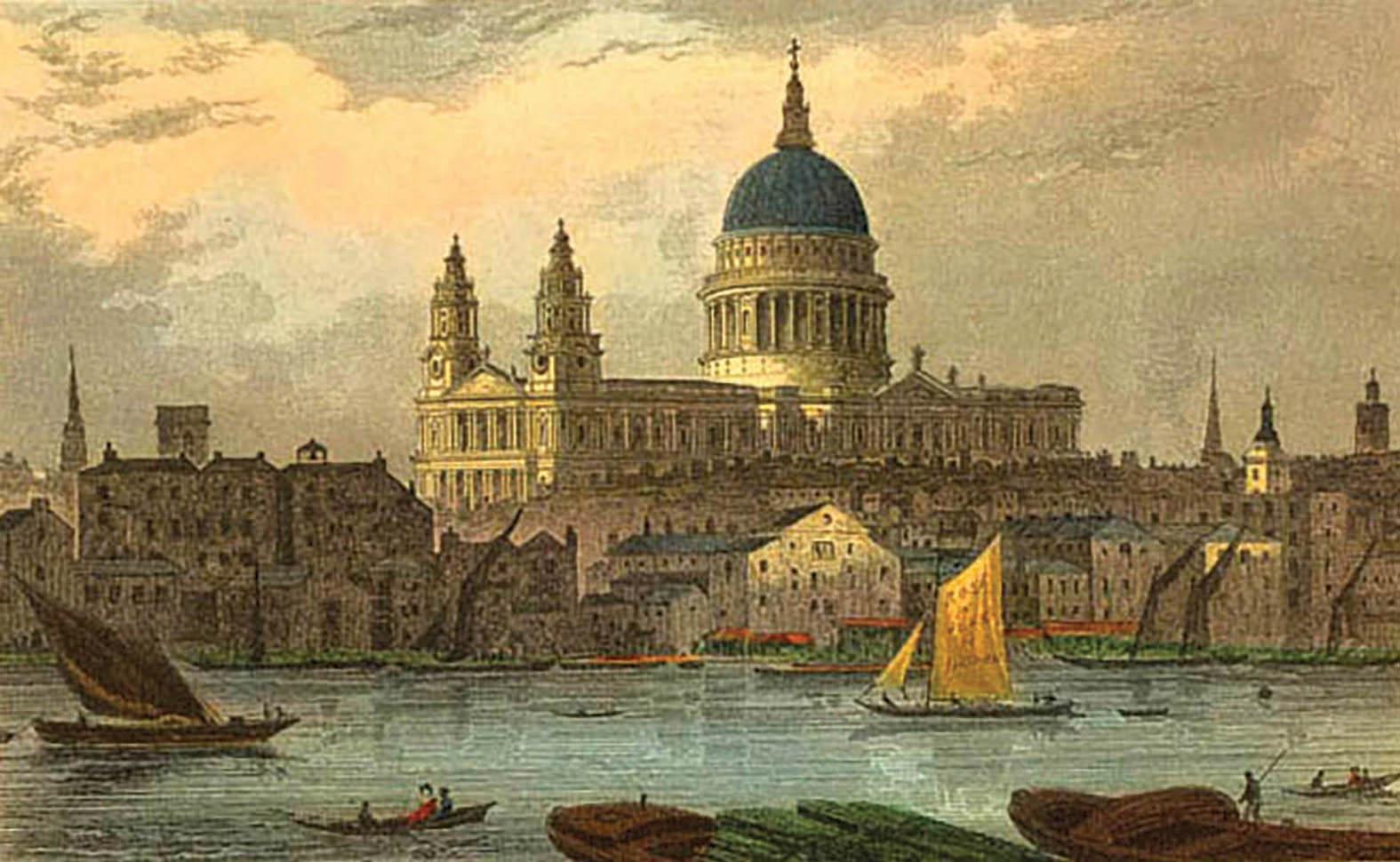 In the painting of Paul Shipwrecked at Malta, the focus is on Paul casting the viper ‘out of the fire’.

The scenario is made up of seven figures, including Paul, gathered around a fire. The background is filled with the elaborately sculpted bow (with a figure head) of a massive ship – presumably that which wrecked on the shores of Malta – with mast and sails still in place (on the left), thick storm clouds and a stretch of calm sea. In the lower half of the painting, among figures of five bearded middle-aged men and a woman, stands the outstanding imposing figure of Paul (looking to the left) holding the robe he was wearing around him with his left hand and his right arm outstretched shaking off the attacking viper which sprung out from the burning twigs.

The vividly depicted men – one of them half-naked sitting in the foreground – were stupefied and are looking up in awe at the apostle. 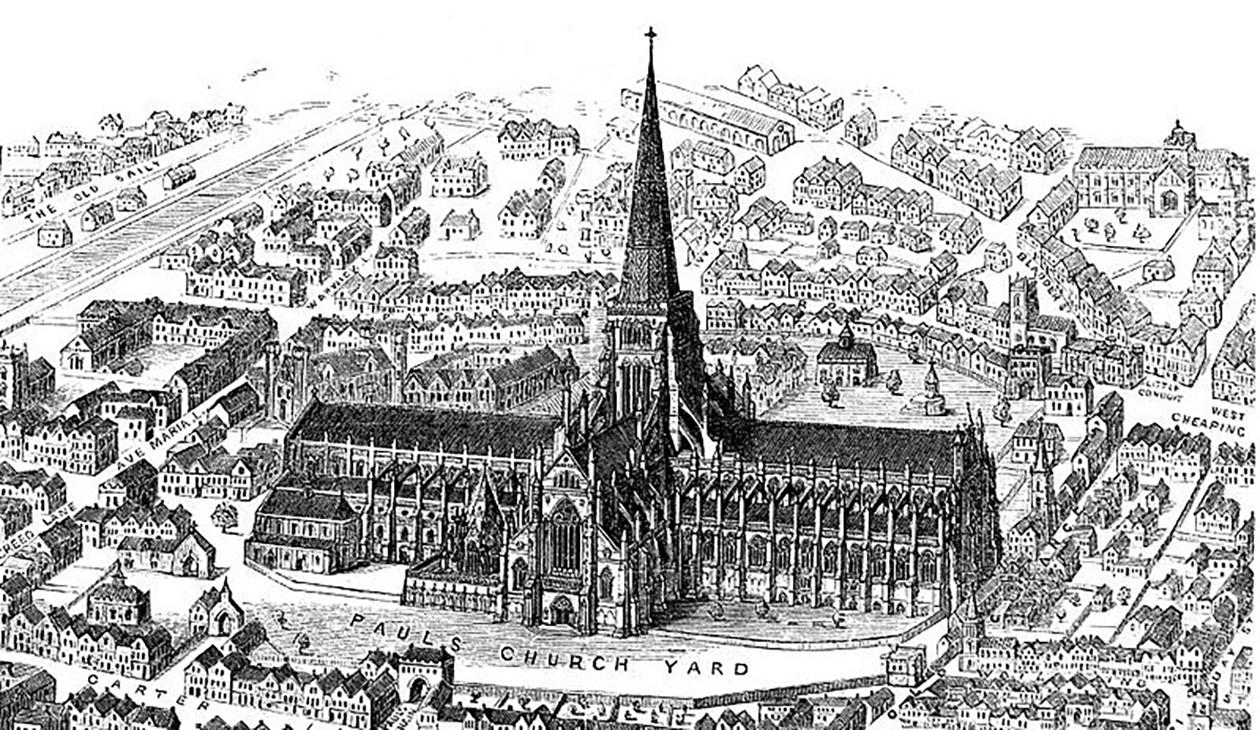 A reconstructed image of Old St Paul’s before 1561. 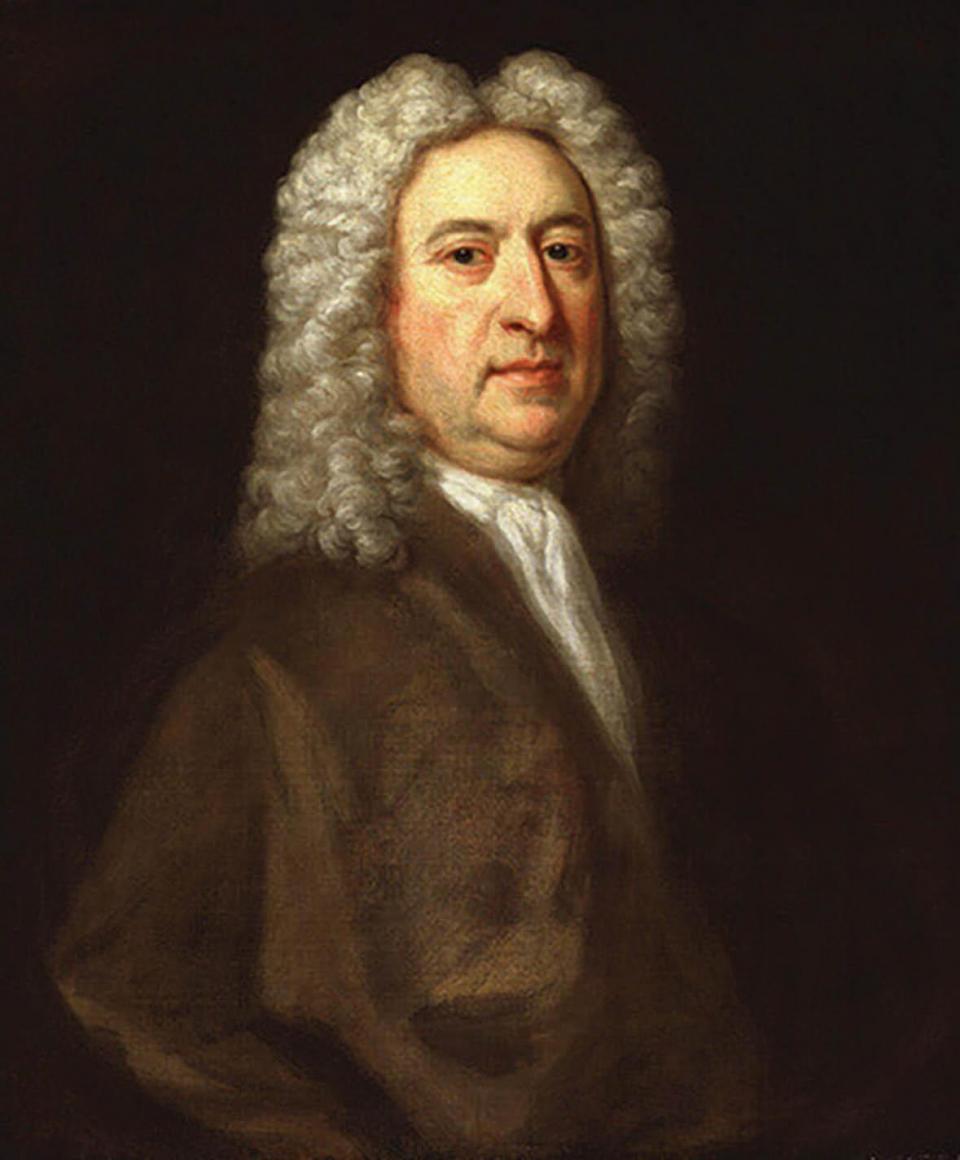 The Wellcome Collection, in London has one such copy of Paul freeing his hand of the viper. It is, however, entitled ‘Mutati, dicebant esse Deum’ [‘They changed their minds and said he was a god’; Acts 28: 6].

It is an impressive etching by English engraver and art dealer Gerard Vandergucht [1696/7-1766], who was commissioned by Thornhill to reproduce etchings of four of his paintings in St Paul’s. Vandergucht engraved an inverted copy of Thornhill’s painting: the ship is on the right and Paul is on the left.

Other striking dissimilar features may be observed in the young lady couching near Paul and one of the two men standing against the bow of the ship, who is young and has no beard. The figurehead on the front part of the ship is also different.

The stunning etching is 443mm high and 268mm wide. The data given on the left hand lower corner states that the original was painted by Thornhill and found in St Paul’s cathedral, in London; that on the right gives the name of the engraver as ‘Ger. Vdr. Gucht’.