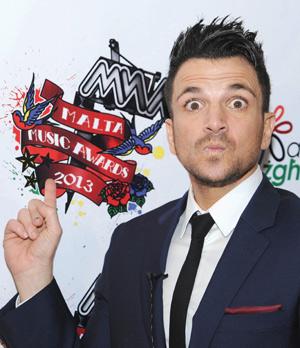 The news that Peter Andre – the former pop singer and now reality TV star – has been appointed Cultural Ambassador to Valletta has caused a furore with hundreds calling on the local council to strip him of the title.

Mr Andre, who last topped the UK charts in 1995 with his single Mysterious Girl, was declared Cultural Ambassador by the Valletta council while in Malta last week to take part in the Malta Music Awards.

On the request of his promoters, Mr Andre met up with Valletta mayor Alexei Dingli at the President’s Palace. The meeting lasted about half-an-hour, during which time the council bestowed the title and also discussed future collaboration.

The singer was a favourite with the British tabloids because of his tumultuous marriage to Katie Price, also known as Jordan, glamour model turned reality TV star.

According to Dr Dingli, the Australian singer who had never been to Malta is “very fond” of Valletta.

So what are the criteria to make someone a culture ambassador?

“It can be given to someone of certain fame, be fond of Valletta and is willing to help in the promotion of our city abroad,” said Dr Dingli.

All seven local councillors, three of whom are aged over 50, unanimously voted to bestow the title.

Dr Dingli said although the title is “not for life” it does not “really have a duration or an expiry date”. It depends how much he will be promoting Valletta, he said.

Upon hearing the news, several people resorted to the social media to voice their shock. “Peter Mr Andre should be the last person to carry such title!”; “Shame on you!”; “Will every artist that graces our island become an ambassador too? Snoop Dogg, anyone?”; “Why don’t we just rename the Mosta dome after his former wife’s assets now?” are but a few of the barrage of sarcasm.

More than 500 individuals signed an online petition on change.org calling for Mr Andre to be stripped of the title.

Dr Dingli said he was aware of the social media uproar: “The title can be misleading perhaps. He does not represent the culture of Valletta, we’re just seeing it from a promotion point of view.”

Mr Andre will be promoting Valletta – for free – on his reality programme on ITV2 called My Life and he will be returning in summer to discuss possibility of “further collaboration”.

As a mayor, Dr Dingli, is one of the governors of V-18 – the foundation organising Valletta’s appointment as Europe’s Capital of Culture in 2018. However, he made it clear that “officially” Mr Andre will not have anything to do with the events.

He stressed that the spirit of V-18 is not just about high culture. “Let’s not discard people like him: he has a certain following even in Malta.”

V-18 press officer Edward Bonello stressed that the V-18 Foundation had nothing to do with this appointment and it is “highly unlikely” that Mr Andre will be involved in the V-18 events.

Mr Andre is the second Cultural Ambassador for Valletta after Cliff Richard was appointed two years ago. When asked if Sir Cliff still lived up to this role, Dr Dingli said: “We don’t follow him personally, but only last week his fans assured us that there was the contact between us and him.”

Attempts to contact Mr Andre for comments about his fondness for Valletta proved futile yesterday.