A painting bought by the State for €15,000 from the husband of a Cabinet minister, which is meant for public viewing, can only be seen by the few who enter the Prime Minister’s official summer residence in Girgenti.

The whereabouts of the oil on canvas was only revealed to The Sunday Times of Malta following a Freedom of Information request filed last November. Neither was it known what the painting depicted until now. 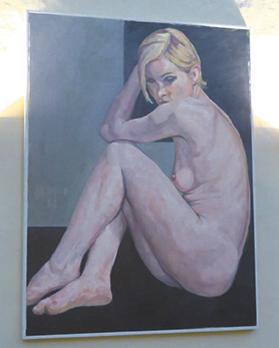 A photo of Patrick Dalli’s oil painting (133cm x 100cm) bought by the State for €15,000 and which is now hanging on a wall of the Prime Minister’s summer residence in Girgenti, rather than in a public place.

It turns out that the work by Patrick Dalli, the husband of Equality Minister Helena Dalli, is a nude portrait of a blonde woman, as seen in the photo supplied under the FOI request. The painting measures 133 centimetres by one metre.

It was acquired by the Finance and Administration Directorate within the OPM in the first half of 2017 and the purchase was listed in The Malta Government Gazette of November 3, 2017.

However, despite being endorsed by State agency Heritage Malta in terms of both artistic quality and price, no reference to it was made in the agency’s 2017 annual report and it was not in the list of acquisitions made.

For over a year, the matter remained under the radar, until last November when the Times of Malta was alerted to the purchase by an anonymous source.

Even though the work was purchased by direct order from taxpayers’ money, the government persistently refused to reveal what the painting was or disclose its location, even in the face of a parliamentary question.

The only information given was a statement issued by the Department of Information that heaped praise on Mr Dalli’s artistry and insisted it was not ‘standard practice’ of the State to acquire works of art through a public call, but rather by direct order.

The acquisition, said the statement, was funded through a specific allocation, adding that paintings and works of art are bought specifically to “embellish public places and enhance the national cultural heritage and national art collection”.

The apparent secrecy prompted this newspaper to file an FOI request, which was eventually upheld.

It now transpires that rather than being used to embellish a public place, perhaps a government museum or art gallery, the painting is hanging at the Prime Minister’s official summer residence in Girgenti, limits of Siġġiewi.

Another source of controversy is its €15,000 price tag, excluding VAT, which had immediately raised eyebrows – it is quite unusual for local paintings to fetch such a high price.

Shown the photo, two art critics both said the OPM paid through the nose.

In its reply through the DOI, the OPM had also said that the work was part of a collection started under the previous administration. It is not known how this new acquisition compares to others in terms of price.