Some believe that music and rhythm can be created using anything and everything available. With a musically-attuned ear one can transform the bustle of everyday noises into a melody of music and rhythm.

To some extent that is what Stomp did in their physical and highly energetic performance that resounded around the relatively new open space at Pjazza Teatru Rjal during the Malta International Arts Festival. To put it simplistically, they created rhythms with everyday objects.

Stomp, for those are not familiar with the act, is the internationally acclaimed, multi-award winning percussion group originating in Brighton in 1991. Performing in front of thousands of people around the globe, they still exhilarates audiences worldwide with their addictive rhythmic sounds.

It was apparent that those present at the festival had either heard or seen Stomp before as everyone in the auditorium was talking with great anticipation about the night’s performance. And in fact, the group’s debut performance at the festival opened to a very warm and welcoming full house.

The show opened with the first performer entering the stage carrying a broom and starting to sweep. The swish-swish movements of the bristles on the floor, accompanied by the banging of the broom created percussive rhythms which left the audience entranced. Gradually, the rest of the troupe joined the act, each playing a different rhythm in synchronisation with one another.

By using their voices and stamping their feet, each performer created his or her own individual beat and a musical score was born. The show slowly became more intricate, with the ensemble increasing the fast-paced rhythm while concurrently interacting with each other in duets and trios, using their props to make the choreography more dynamic.

One by one, the group went through a series of props, creating complex percussive sounds for an entire one hour 40 minutes of exhilarating music – using everything from matchboxes to sinks, tubes, cans, oil drums and other props that people might not automatically associate with the idea of music as we usually experience it.

While leaving the theatre, some people could be seen clapping co-ordinated rhythms in groups

At one point, flour was thrown on the floor to create a muffled scraping sound. Even the set itself was used as a prop as the team used the various items attached to it – such as pots, pans and traffic signs – and transformed these into instruments to create different sound and beats that ranged from the basic and soft to loud, fast-paced and complex.

The music arrangement was captivating as at times, while each player was exhibiting his or her own score, the group uncannily mingled in unison in an unpredictable way, transforming itself into an alternative orchestra. The audience was kept in suspense and anticipation trying to guess what will be the next surprise and performance in the show. 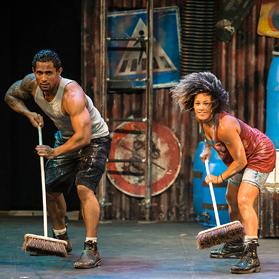 One scene flowed into the next smoothly without losing any of the dynamic or momentum, so that the energy of the performance escalated consistently to reach a climax.

The scenes were built not only around percussive beats but also around social interaction, whereby performers interacted with each other to create comical situations. These theatrical and comical interactions among the group members gave the performance an added human touch, as the audience could also relate to the social aspect of the performance not just the music.

The performance was thrilling mainly for its elaborate choreography and precise co-ordination required, all of which contributed to build a fast-paced and dynamic evening.

It takes impressive skill and long hours of practice and training to be able to create such rapid and complex percussive rhythms with everyday objects, while co-ordinating with a full ensemble and yet still retaining individual personality throughout the performance. The impeccable execution and the unpredictability of the choreography makes one wonder about the creative process and how the ensemble thought to use such unconventional props to create such complex rhythms.

The most entertaining part of the evening was when one of the performers managed to engage the audience to participate by clapping, without him having to say a word. As soon as he clapped, the audience followed suit. And, if we didn’t exactly satisfy in our response, he showed his disapproval in a comic, non-verbal way.

Getting an audience to participate effectively is not an easy feat – yet, the audience was so energised that everyone played along without hesitation.

I have to say that towards the end proceedings did start to drag somewhat, with the final scenes becoming a repetition of earlier scenes in the show.

However, this was rectified with some audience involvement during the final call, which left audiences buzzing even after the show ended. The performance was certainly an electric and uplifting one, so much so that, while leaving the theatre, some people could be seen clapping co-ordinated rhythms in groups.

This, I believe, gives new meaning to the phrase “inspiring an audience”.