The Director of Prisons, Abraham Zammit, has submitted his resignation after the Home Affairs Minister yesterday made a surprise visit to the prisons and found that four guards had left for home several hours early.

The resignation is expected to be accepted. 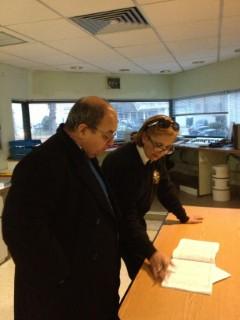 The minister during his visit to the prisons.

The minister , Manuel Mallia, ordered an immediate investigation after he found the guards absent .

He turned up unannounced at the prison in Corradino at 7.30 p.m. and found that the four guards who were supposed to be at work were actually at home, even though their shift was meant to end at 9 p.m.

He also found that the punch clock was often not used.

The minister was told that this was a situation which had been going on for a long time, and had it been during a weekday, he would have found as many as seven or eight officers missing.

He was also told that some officers left for home at 1 p.m. instead of 9 p.m, the ministry said.

It added that this was a case of serious abuse since national security was involved and the officers were not paid by taxpayers to stay at home.

The minister demanded an explanation from the Director of Prisons, who said he did not know of this abuse.

An investigation was launched by the Permanent Secretary and all those who had abused would have to pay for their actions, the ministry said.

The attendance book had been seized as part of the investigation.