Pro-Kurdish politicians, including Cabinet ministers, attempted to march to a town in southeast Turkey yesterday to protest a week-old curfew there, as their party came under fire from President Tayyip Erdogan and from a court investigation of their leader.

Conflict between militants of the Kurdistan Workers Party (PKK) and Turkish security forces has surged since a ceasefire collapsed in July, shattering a peace process launched in 2012 and leaving hundreds dead.

The pro-Kurdish Peoples’ Democratic Party (HDP) and its leader, Selhattin Demirtas, have accused Erdogan and the ruling AK Party of whipping up nationalist sentiment ahead of a November1 election while enforcing a security crackdown in the mainly Kurdish southeast.

HDP offices have been targeted, and some set ablaze, in a series of attacks across the country by nationalist crowds this week.

Demirtas and other HDP parliamentarians started a 90-kilometre march on Wednesday toward the town of Cizre in the southeast after security forces halted their convoy.

Yesterday they started a sit-down protest on a hillside near the border with Syria and Iraq after their path was blocked by soldiers with riot shields, party officials said.

Cizre has been under curfew since last week due to fighting with PKK militants there. HDP politicians say they want to bring attention to what they describe as dire security and health conditions in the town. 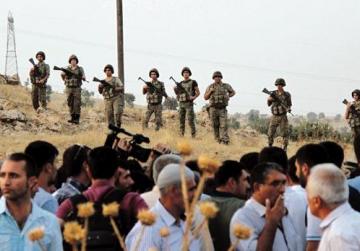 Turkish soldiers block a road to stop a convoy, carrying a delegation of the pro-Kurdish Peoples’ Democratic Party (HDP), near the southeastern town of Idil, Turkey.

“The government should not be allowed to get away with what is being done today in Cizre,” Demirtas said in a telephone interview broadcast by IMC TV, promising to “carry Cizre’s voice to the world”.

He was accompanied by Turkey’s EU Minister Ali Haydar Konca and Development Minister Muslum Dogan, both from the HDP and members of an interim Cabinet steering the country to a snap parliamentary election on November 1.

Prosecutors in Diyarbakir, the region’s largest city, launched investigations into Demirtas on Wednesday on charges of terrorist propaganda, inciting crime, and insulting the Turkish State and President. A request was made to lift the immunity from prosecution which Demirtas has as an MP, prosecutors said.

Erdogan has also stepped up the pressure on HDP, repeating accusations it was linked to the PKK, which is designated a terrorist group by Turkey, the European Union and the United States.

“If you take the side of terror you will run the risk of paying the price for that,” he told a news conference. “This political movement has begun to present a completely illegal appearance.”