The lands and planning authorities have both issued orders for the “reinstatement” of government fields, leased to farmers, which were illegally dug out during excavations for a block of 24 flats in Qala.

A development permit for the flats with underlying garages was issued to Chloe Portelli, who is listed as the “director’s assistant and administrator” on the website of J. Portelli Projects, owned by property magnate Joseph Portelli.

A spokesman for the Planning Authority said excavations had commenced in breach of permit conditions.

“Excavations on the east side and removal of topsoil on the west side of the site are illegal since these areas are outside the boundaries of the site shown on the approved site plan. These areas need to be reinstated and the owner was instructed to do so accordingly,” the PA spokesman said.

A spokesman for the Lands Authority confirmed that works “have, in fact, been carried out on government land”.

“The contractor was ordered to stop and the developer, who was on site, committed himself to reinstate the government land to its former state,” he said.

The excavated field on the east side was still a scar in the bedrock of around 12 metres by 30 metres when Times of Malta visited two days ago.

The development of flats fronted by Ms Portelli is one of a line-up of three blocks being developed along the 200-metre-long Ta’ Kassja Road.

One side of the road consists mostly of two-storey houses. The flats are due to rise on sloping land that, until recently, consisted of terraced fields highlighted by carob trees.

The flats number 101 in three blocks whose mass has left residents muttering about the imposing and dense developments in what has until now been a sleepy residential area. 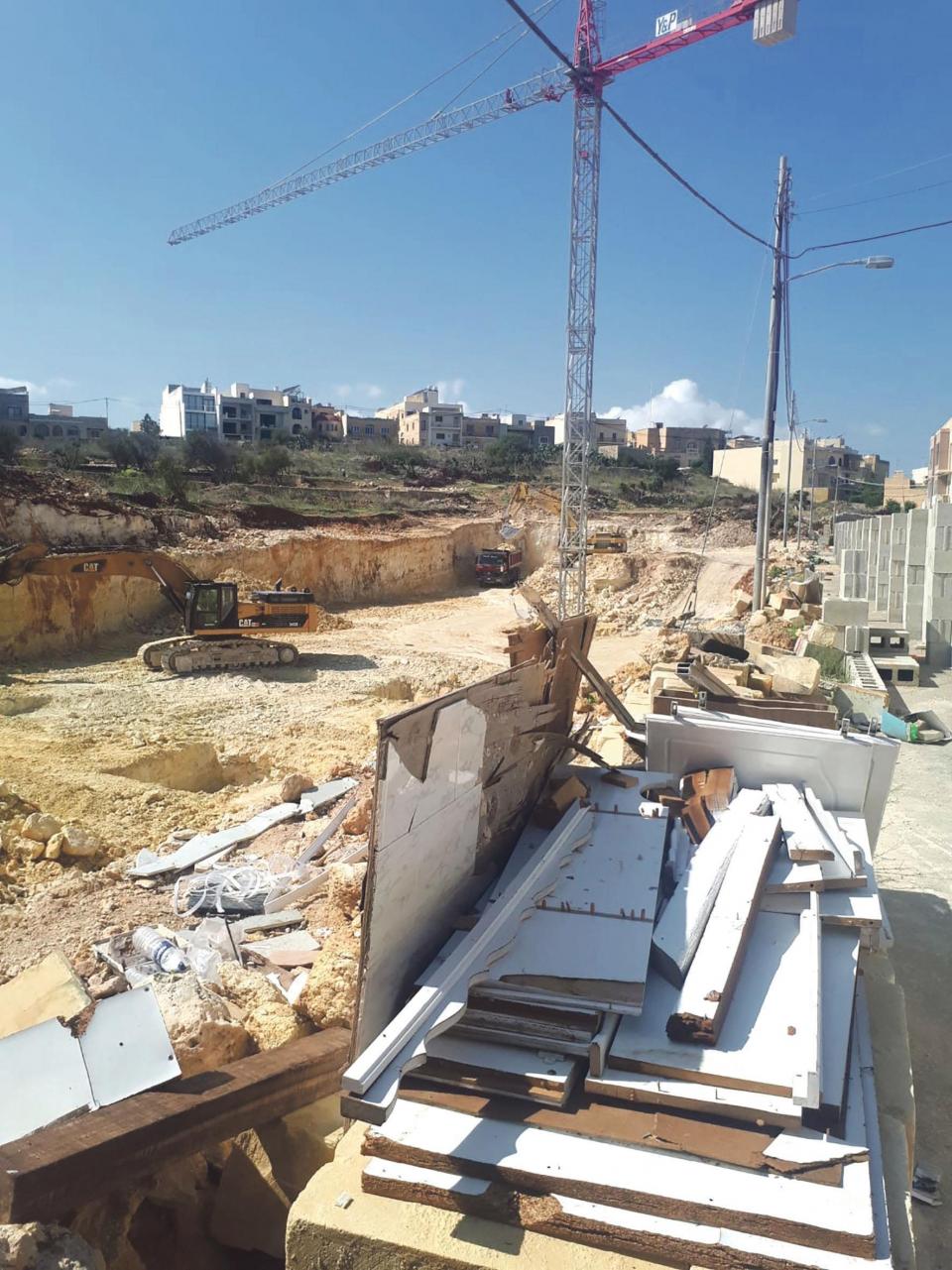 Excavations for the flats in Qala.

Paul Buttigieg, mayor of Qala local council, said residents had complained to the council for failing to object to the developments.

“I am not in favour of those developments but the area has been within development zone since 2006 and the advice I had was that the carob trees were not protected,  so it would have been futile to use up council resources to object to a development that would be granted,” Mr Buttigieg said.

The Planning Directorate had highlighted the height and mass of the buildings and, in two of the applications, had maintained that the proposed development ran counter to planning objectives on protection and enhancement of “the character and amenity of urban areas”. Its recommendation for refusal was overturned by the Planning Commission after the architect tweaked plans to reduce building heights.

Excavation for the two has been simultaneous and, in the latest move, the applicants both submitted fresh applications last September 20 for “construction of basement and ground floor with a different layout from that approved [in their existent applications]”.

While one of the applications was filed by an employee of Mr Portelli, the other was submitted by Daniel Refalo, a young man who rents umbrellas and sun loungers. The third block of 53 flats is fronted by Mark Agius, who worked with his mother at Ta’ Dirjanu supermarkets before branching out into property development.

Mr Portelli is the majority shareholder of Excel Investments Ltd and Mr Refalo and Mr Agius are his partners. This is the same company that bought a chunk of land with a 31-square-metre structure in ruins in a remote location in Qala and applied to build a pool villa under an application in the name of Mr Agius.

The Qala mayor said: “No permit should be given for any development in the area [where the pool villa is proposed] because there are no other developments.”

The council, he pointed out, would not object to the renovation of any ruins but was vehemently opposed to any additions or extensions.