A number of proposals are being evaluated by the government on the best way to commemorate the iconic Azure Window, which collapsed this time last year, the Environment Ministry has said.

However, no further details have been divulged, not even the number of submissions received or the timeframes going forward.

The move follows an international call which was announced on March 9, 2017, just a day after the loss of the prominent landmark and huge tourist attraction which dominated the Dwejra coastline in Gozo.

Prime Minister Joseph Muscat himself broke the news of this “international consultation initiative” live on Sky News from Brussels at the margins of an EU Council meeting.

Within hours, a news conference was held in Malta addressed by no fewer than four Cabinet ministers.

Back then a total of seven options were being mooted. One was leaving the site as it is.

The other proposals included recovering parts of the structure from the sea and putting them permanently on display, creating an interpretation centre and using so-called ‘augmented reality’ to recreate the site technologically.

The other three ideas floated were to erect an artistic installation at, or close to, the site of the former Azure Window, making an artificial recreation of the structure, or “any other innovative idea” so long as it conformed to environmental conservation and protection rules.

The government said it was open to other suggestions. 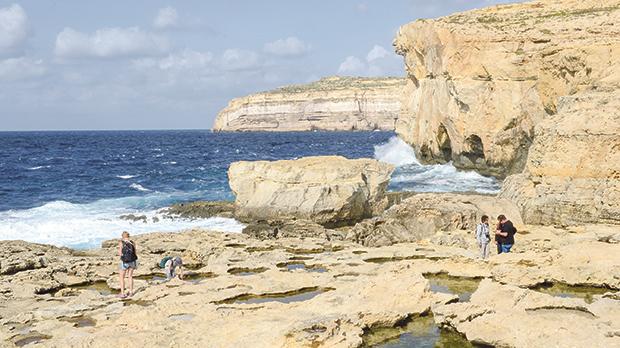 How the area looks today.

All necessary steps were to be taken to ensure that the site would be adequately remembered and that thousands of visitors would still visit, according to an official statement issued at the time.

A total of seven options were being mooted

It was also announced that the consultation initiative would be discussed and commissioned during the following Cabinet meeting and published accordingly.

Twelve months down the line, however, it appeared that the project had gone the way of the Azure Window itself, into oblivion. Last September this newspaper asked the government whether there had been developments but received no reply.

A few days ago, The Sunday Times of Malta made another attempt – and this time a terse reply was received from an Environment Ministry spokesman.

The Dwejra international consultation initiative was currently “under adjudication”, the spokesman said somewhat out of the blue. Further information would be given once the process was completed, he added.

Asked for further details about the call, which appears to have been made without any publicity, the spokesman said it had been published in The Government Gazette and advertised in local newspapers, as well as being uploaded on the government’s official tendering website (ePPS).

According to the spokesman, interested parties had between September 1 last year and January 15 of this year to respond to the call. The spokesman did not specify the date on which the call was made.

The only document that this newspaper was able to find a trace of was a “preliminary market consultation” issued by the Environment Resources Authority. The title mentioned the setting up of a Dwejra Heritage Park but made no reference to the Azure Window.

However, the document could not be analysed as it is no longer on the authority’s website.

As for the way forward, the government would not even say how many submissions had been received nor the date by which the winning proposals would be announced.