Crowds gathered for the fifth time in a week on Wednesday to protest the government and its involvement in the Daphne Caruana Galizia murder case.

The demonstration, which began outside parliament, ended in Floriana with chanting protesters blocking traffic flowing around the War Memorial roundabout.

There, they staged an impromptu sit-in as they chanted "Joseph, barra" [Joseph, out] and "Daphne was right".

Protestors are calling for Prime Minister Joseph Muscat to step down after a week marked by political resignations and tumultuous police investigation.

From Parliament square to Castille and then Floriana streets. Video: Mark Zammit Cordina

Minister Konrad Mizzi and Chris Cardona were forced out on Tuesday, a few hours after Dr Muscat’s chief of staff resigned and was taken in for police questioning.

Protesters chant 'Daphne was right' as they stage a sit-in by the War Memorial in Floriana. Video: Jessica Arena

The protest, which began outside parliament, moved to outside Dr Muscat’s Castille offices by 7pm. But steel barricades set up around Castille Square earlier in the evening by police kept activists a good distance away.

The event soon moved to the War Memorial monument roundabout just down the road in Floriana. As protesters sat down and chanted, motorists reversed back out of the roundabout and buses snaked back along the Valletta bus terminus, unable to exit towards their routes.

“I think they’re all disgusting,” said Francesca, 29.  “The Prime Minister is just as corrupt as all of them as well. The country’s reputation has been destroyed”.

The commotion attracted the attention of an unlikely group - a freshly graduated batch of doctors who wondered into the crowd while out celebrating their graduation and briefly joined in the protest. 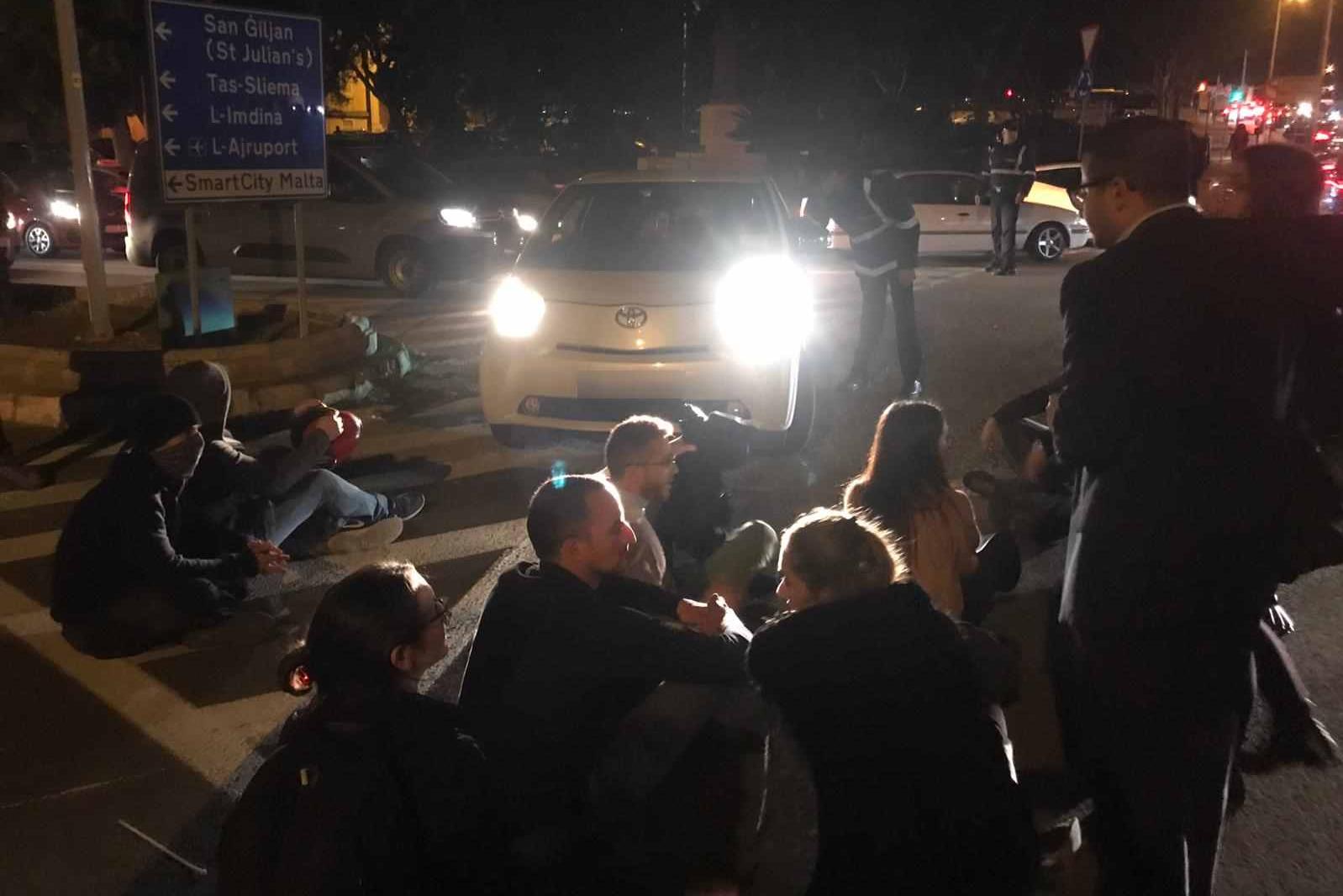 Road access was blocked off by protesters staging a peaceful sit-in.

Nationalist MP and former Opposition leader Simon Busuttil was applauded when he joined the group. Dr Busuttil was soon joined by other Nationalist Party MPs, who walked through the crowd, waving and smiling.

Their presence was not welcomed by all those present, with some making their displeasure known and at one stage openly asking politicians to leave the event.

By 6.30pm parliament square was relatively packed, though its capacity was restricted by steel barriers placed further back in the square, after MPs were pelted with eggs and coins on Tuesday.

Activists have already scheduled further protests to be held this week, with a Graffitti-organised event on Saturday to be followed by a protest organised by Occupy Justice and Repubblika the following day.

In a statement, the Institute of Maltese Journalists condemned intimidation, threats and attacks on journalists, pointing out that it received reports that some journalists were insulted, threatened and egged during Tuesday’s protest.