Wednesday's collapse of a block of apartments in Gwardamangia underlines the need for the authorities to immediately rein in the issuance of building permits and enact long-overdue reforms to stamp out malpractice and restrain cowboy developers, an NGO warned on Saturday.

Read: Building collapses in Gwardamanġa, residents out in the streets

The real costs to society from 1,500 annual building permits to 15,000 applications are clear for all to see.

The Planning Authority’s "political masters" have blocked any form of planning, while the Building Regulations Office and Occupational Health and Safety Authority are lacking in staff and motivation to manage this tenfold workload increase and ensure developers work within regulations.

Construction workers’ right to work in a safe environment has been ignored for years, leaving the construction sector with an abysmal track record for the highest rate of workplace injuries and deaths. The presence of so many untrained foreigners on building sites hampers communications and has led to many dangerous situations, FAA said.

Persons with no experience, training or qualifications are running building sites or operating cranes

Minimum training standards on the part of contractors, coupled with high demand, has led to a situation where persons with no experience, training or qualifications are running building sites or operating cranes, resulting in poor standards of construction and serious accidents.

Second-hand imported cranes, construction vehicles and even lifts are often not adequately inspected, which leads to vehicles belching toxic emissions, or worse, to accidents. 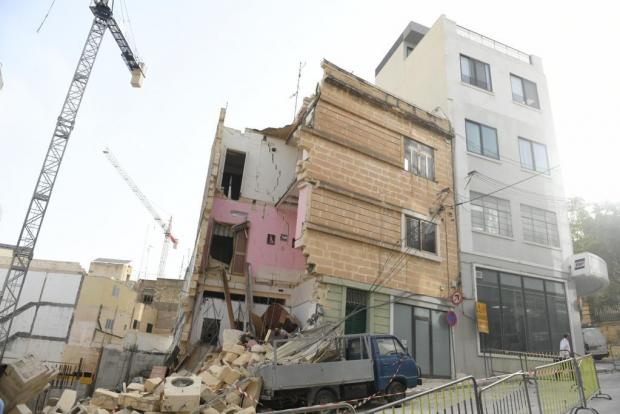 The partial collapse of the building in Gwardamanġa. Photo: Matthew Mirabelli

The police appear to lean towards developers, closing a blind eye to violations like works beginning before 7am, working on public holidays, failure to use vacuum attachments when grinding stone and failure to wash construction vehicles’ wheels when leaving a construction site, resulting in an increase in serious health problems triggered by dust pollution.

"Contractors often fail to erect scaffolding, provide safety gear and take over pavements, leaving pedestrians including mothers with strollers and wheelchair users having to risk their lives on busy roads."

FAA said architects have contributed to the mess by caving in to developers’ demands to squeeze the maximum possible number of units into each site, benefitting in the process.

"Allowing developers to excavate within a metre or sometimes right up to the walls of neighbouring buildings, has resulted in several structures collapsing and even in deaths. It has contributed to untold damage to neighbours’ properties all over the islands, often not compensated by the culprits.

"The people have tolerated enough and the government must put the brakes on building developments until all safety and environmental rules and regulations are fully complied with."